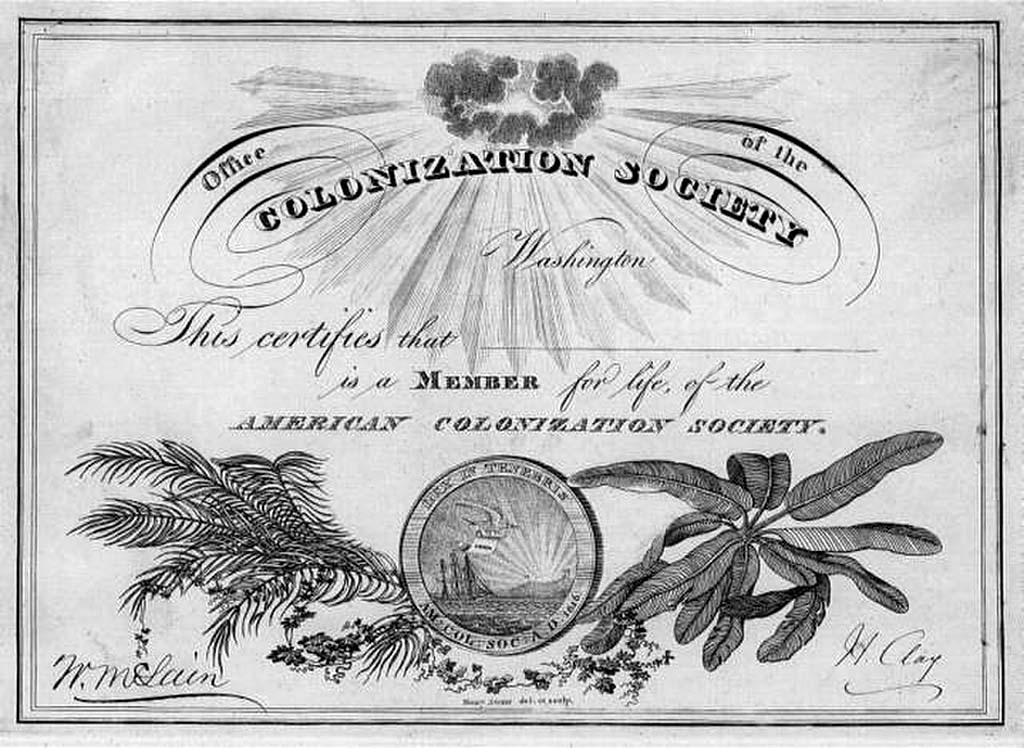 The American Colonization Society (ACS), also known as the American Society for Colonizing the Free People of Color in the United States, emerged in 1816 as a national organization dedicated to promoting the manumission of the enslaved and the settlement of free blacks in West Africa, specifically in the colony of Liberia. The ACS transported approximately 12,000 blacks to Liberia over the course of its existence.

In December 1816, alarmed by the rapidly growing free black and slave populations, the Reverend Robert Finley, a Presbyterian minister from Basking Ridge, New Jersey, travelled to Washington, D.C. to gather support for colonization which he saw as the solution to the growing racial tension in the United States. He led a meeting which created the ACS on December 21, 1816. The meeting included some of the most powerful and influential men in the country such as Henry Clay, Daniel Webster, and John Randolph of Virginia. Finley believed the presence of blacks in the United States was a threat to the national well-being and felt Africans Americans would only be able to fulfill their potential as human beings in Africa. He envisioned slaveholders freeing their slaves and sending them to Africa. Colonization, according to Finley, would thus benefit American blacks as well at the entire nation by promoting a gradual end to slavery.

American Colonization Society members were overwhelmingly white and initially included abolitionists as well as slave owners, all of whom generally agreed with the prevailing view of the time that free blacks could not be integrated into white America. Other black and white abolitionists, however, began to question the intent of the ACS, claiming its true intent was to drain off the most educated of the free black population which often challenged slavery and thus preserve the institution.

The society’s program focused on purchasing and freeing slaves, paying their passage (and that of free blacks) to the west coast of Africa, and assisting them after their arrival there. The federal government provided some initial funding for the Society and helped the ACS purchase the Cape Mesurado area off the coast of West Africa which subsequently became the colony of Liberia. In 1830 the government ended its payments to the ACS; from then on the colonization program was financed exclusively by local and state branches and from churches. In 1838 the ACS adopted a new constitution, one in which the organization became a federation of state auxiliaries.

Between 1820 and 1831 nearly 3,000 black emigrants went to the ACS’s settlement in Liberia. By the mid-1830s though, negative reports from previous emigrants and improving economic conditions for blacks in the United States led to a decline in the Society’s ability to recruit new emigrants.

In 1847, Liberia declared its independence from the American Colonization Society. As the only western-oriented nation on the African continent, Liberia attracted another 2,000 settlers between 1848 and 1860. It was inactive during the American Civil War as African Americans gained their freedom and thus saw no reason to emigrate.

Ironically, the ACS was revived in the 1870s by black leaders such as Rev. Henry McNeal Turner as the end of Reconstruction dashed hopes of many African Americans that they would enjoy full citizenship rights. With much fanfare the ACS sent another two thousand blacks to Liberia. Despite deteriorating political conditions in the United States, however, the vast majority of blacks rejected this new call for emigration. The ACS sent its last settlers to Liberia in 1904. Thereafter, the American Colonization Society functioned as a Liberian aid society until it finally dissolved in 1964.