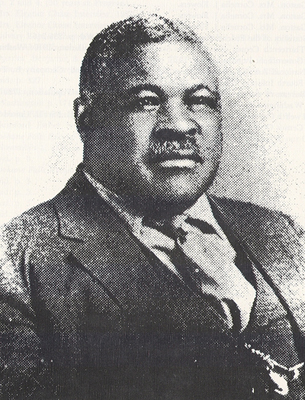 James Edward Shepperson is considered one of the most influential leaders and spokesmen among Black miners in Washington during the late 19th century and early 20th centuries.

Shepperson was born in Roanoke, Virginia in 1858. In the 1870 census, he was listed living with his mother, Matilda, and his and stepfather, Parker Robertson, a blacksmith. Shepperson, 12, was working as a farm laborer and his little sister, Clara, 9, was already working as a “domestic.” His mother died after the family moved to Farmsville, Virginia, when Shepperson was 14. He attended public schools in Jacksonville, Florida and Greensborough, North Carolina. In his twenties, he spent seven years in Iowa and Illinois, likely working in the coal mines.

Shepperson moved to Kittitas County in eastern Washington State in 1888, where he worked various jobs in and around the coal mines in Roslyn, a coal mining town founded in 1886 by the Northern Pacific Railroad.  He was also a businessman and labor recruiter into the 1890s and he was involved in the initial recruitment of Black workers for the coal mines in Roslyn.

After the Knights of Labor instituted a strike in 1888 that shut down Roslyn’s mines, the Northern Pacific Railroad hired Shepperson to recruit Black miners from North Carolina, Kentucky, and Virginia.  Over the next year, Shepperson helped bring in more than 300 Black miners and their families to the Roslyn area, representing the largest increase in the Black population in Washington to that date. He also acted as spokesperson for the Black community to the Northern Pacific Railroad.

In the 1890s, Shepperson founded the Black Masonic Lodge in Washington and served as the third Grand Master from 1909 to 1910.  He was the co-founder of the Seattle branch of the International Council of the World in 1901, an organization that promoted the arrest, trial, and conviction of whites who initiated racial violence.

Shepperson also briefly took a job working as a recruiter for the Union Pacific Coal Company (UPCC) in Wyoming in 1890. The company hired him to duplicate his efforts in Roslyn and he recruited about 200 Black miners and their families as strikebreakers to the new coal mining town of Dana in Carbon County. After tension broke out among the miners and the company, the UPCC and the press blamed Shepperson for misrepresenting the situation to the miners. He was detained and questioned but he made his way back to Roslyn. It does not appear he took any further recruiting jobs in Wyoming after this experience. Like Roslyn, Dana was for a short time the first majority Black community in Wyoming because of Shepperson’s efforts.

James Shepperson operated a recreation hall in Roslyn in the early 1900s.  A successful businessman, he was also active in local politics. He was president of the Washington State Colored Republican Club and was active in the Republican Party for most of his life. Seattle’s Black newspaper The Seattle Republican once called him as a “power in Kittitas County politics.” His life and career were described as mainly of service to his community. James Shepperson died in Ellensburg, Washington on July 28, 1934 at the age of 77.