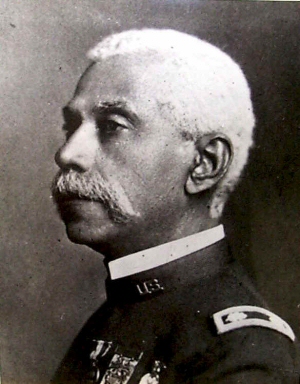 Born into slavery in Kentucky in 1842, Allen Allensworth gained his freedom in the Civil War when the Forty-fourth Illinois Volunteer Infantry was camped in Louisville, Kentucky. Young Allensworth dressed in an old uniform, plastered mud over his face and marched boldly up Main street with the Union soldiers. After escaping he served as a civilian nursing aide with the Forty-fourth Illinois. He later served a two year enlistment in the U.S. Navy and was Captain’s steward and clerk on the civil war gunboat U.S.S. Tawah when it was destroyed in an engagement with Confederate batteries at Johnsonville, Tennessee.

After being honorably discharged from the Navy, Allensworth operated two restaurants with his brother William, taught in Freedman’s Bureau schools in Kentucky, was ordained as a minister, and served as Kentucky’s only black delegate to the Republican National conventions of 1880 and 1884. After a two-year campaign in which he solicited the support of Congressmen John R. Lynch of Mississippi and Senator Joseph E. Brown of Georgia, President Grover Cleveland signed his appointment as Chaplain of the 24th Infantry Regiment.  While serving at Fort Bayard, New Mexico Territory, Allensworth wrote Outline of Course of Study, and the Rules Governing Post Schools of Ft. Bayard, N.M., which became the standard Army manual on the education of enlisted personnel.

On April 7, 1906, after twenty years of service, he was promoted to the rank of lieutenant colonel making him the first black officer to receive this rank. In 1908 retired Chaplain Allensworth and four other black men formed the all-black town of Allensworth, California. Six years later, in 1914, Allensworth was crossing a Los Angeles street when he was killed by a motorcycle.