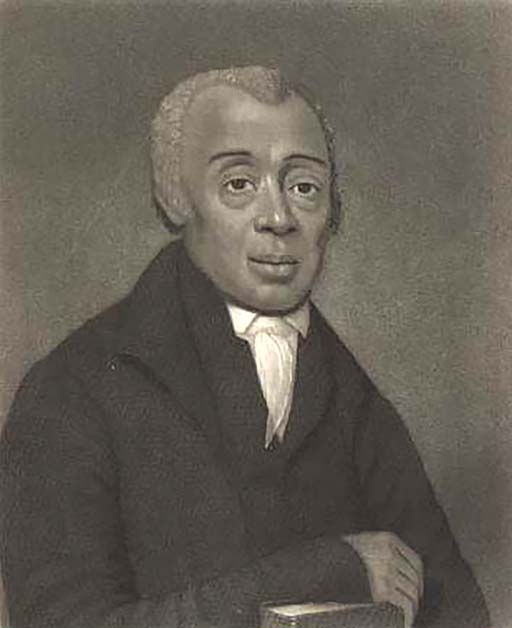 Born into slavery in Philadelphia, Pennsylvania, on February 14, 1760, Richard Allen went on to become an educator, writer, minister and founder of the African Methodist Episcopal Church.  Benjamin Chew, a Quaker lawyer, owned the Allen family, which included Richard’s parents and three other children.  Chew eventually sold the Allen family to Stokeley Sturgis, a Delaware planter.

At age 17 Allen was converted to Methodism by an itinerant preacher.  Allen’s master, Stokeley Sturgis, was said to have been influenced by Allen to become a Methodist as well. After his conversion, Sturgis offered his slaves the opportunity to buy their way out of slavery.  In 1783, by working at odd jobs for five years, Allen managed to purchase his freedom for $2,000. In the meantime, Allen began to preach in Methodist churches and meetings in the Baltimore area.  Through his Methodist connections Allen was invited to return to Philadelphia in 1786. Upon arriving in the city he joined St. George’s Methodist Episcopal Church, where he became active in teaching and preaching.

As the number of African Americans attending St. George’s increased, racial tensions mounted. Allen preached at 5:00 a.m. in special services on Sunday mornings to approximately 50 African American Methodists.  When they attended the regular morning service, segregated seating was instituted. With this segregation Allen became convinced that a separate church was necessary for the black congregants.  In 1787 Allen and a number of other African American Methodists walked out and formed a separate church that would become Bethel African Methodist Episcopal Church, the first Methodist church in the United States specifically for African Americans. Seven years later, on July 29, 1794, Bethel was dedicated by Bishop Francis Asbury. Richard Allen served Bethel Church as its pastor, and he was ordained a deacon by Asbury in 1799.

Other African American Methodist churches were formed in New York, New Jersey, Delaware and Maryland.  On April 9, 1816, after two decades of conflict with white Methodism, Allen and other African American Methodist preachers hosted a meeting in Philadelphia to bring these churches together and to form a new denomination, the African Methodist Episcopal Church (AME). Allen was elected bishop, and with his consecration became the first African American bishop in the United States. By the time Allen died at his home on March 26, 1831, the AME church was well-established in the United States and supported missions in several countries overseas.