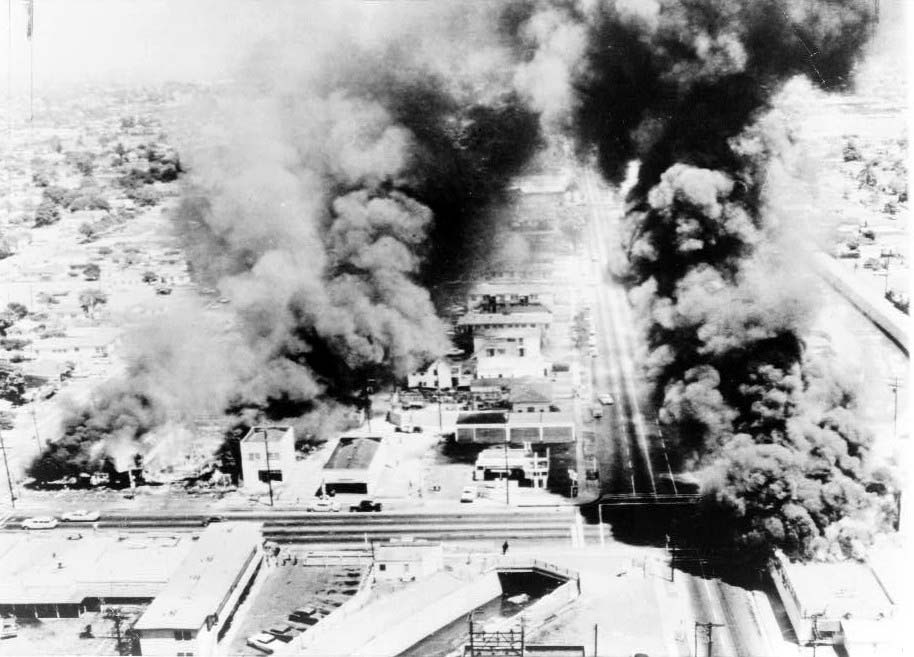 The Watts Riot, also known as the Watts Rebellion, occurred in Los Angeles, California from August 11 to August 16, 1965. The riot took 34 lives and injured 1,032 people. There were nearly 4,000 arrests and $40 million in property damage in what was until that point, the largest urban rebellion in the United States in the 1960s.

Although the riot began on August 11, 1965, its roots go back at least two decades. Following World War II, over 500,000 African Americans migrated to West Coast cities in hopes of escaping racism and discrimination. However, they found both in the west. For many Black Los Angeles, California residents who lived in Watts, their isolation in that community was evidence that racial equality remained a distant goal as they experienced housing, education, employment, and political discrimination. These racial injustices caused Watts’ African American population to explode on August 11, 1965, in what would become the Watts Rebellion.

The rebellion began on August 11th when the Los Angeles Highway Patrol stopped black Watts resident Marquette Frye and his brother, alleging that they were speeding. Back-up was called from the Los Angeles Police Department (LAPD) as a crowd of African Americans gathered to watch the scene. Since the incident was close to Frye’s home, his mother emerged to find her son resisting arrest. Fearful that his arrest may ignite a riot, one LAPD officer drew his firearm. Catching a glimpse of the gun, Mrs. Frye jumped onto the officer’s back, causing the crowd to begin cheering. Los Angeles Police Department (LAPD) officers arrested all three of the Fryes. Enraged by the family’s arrests, Watts’ residents protested as the police cars drove away. Less than an hour later, Black Angelenos took to the streets.

The six-day revolt which involved some 30,000 people served as stark testimony to the inequality and poverty that dominated the lives of thousands of Watts’s residents. Many of those engaged in the uprising looted items from local groceries and clothing stores, acquiring what they wanted and needed but often could not afford. Others battled the LAPD which they held immediately responsible for their poverty and alienation.

By Saturday night, a curfew was set and 14,000 National Guard troops arrived to patrol the streets and set up barricades. The following day most African Americans retired to their homes. Despite the protest, the Watts Rebellion did not significantly improve the lives of the community’s Black population. While the revolt inspired the federal government to implement programs to address unemployment, education, healthcare, and housing under Lyndon B. Johnson’s “War on Poverty,” much of the money allocated for these programs was eventually absorbed by the Vietnam War.

Today, most of the population of Watts is Latino with many residents from the Central American countries of El Salvador, Guatemala, and Honduras. Although the population has changed, many of the issues of poverty, alienation, and discrimination still plague the community today.