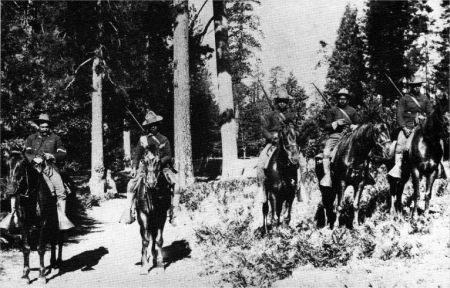 When the U.S. Army was reorganized on July 28, 1866, for peacetime service after the American Civil War, six regiments were set aside for Black enlisted men. These included four infantry regiments, numbered 38th through 41st. The 24th Infantry was organized during a reduction in March 1869 by merging the 38th and 41st. Both had served in Texas since their establishment, and the consolidation took place at Fort McKavett. The regiment’s first four commanders had rendered distinguished service in the Civil War. They were Colonels Ranald S. Mackenzie (November 1869-December 1870), Abner S. Doubleday (December 1870-December 1872), Joseph H. Potter (December 1872-April 1886), and Zenas R. Bliss (April 1886-April 1895).

The regiment remained in Texas until 1880, then served in Indian Territory between 1880 and 1888. It spent the next ten years in New Mexico and Utah. Because of the nature of operations against highly mobile Indians, the infantry did not participate in as many combat engagements as the cavalry. Two soldiers, Sergeant Benjamin Brown and Corporal Isaiah Mays, received the Medal of Honor for bravery against bandits during what became known as the Wham Paymaster robbery in Arizona Territory on May 11, 1889. Four Seminole-Negro scouts received the Medal of Honor while serving with the regiment: Private Pompey Factor, Private Adam Payne, Trumpeter Isaac Payne, and Sergeant John Ward.

The 24th served in more civil disputes than other Black regiments. Elements were garrisoned in a temporary camp in western Wyoming after the anti-Chinese riots of 1885. They later followed the march of Coxey’s army in the West. The regiment protected mine property (along with the 25th) in labor disputes involving the Western Federation of Miners in Idaho and Montana during the 1890s, notably in the Coeur d’Alene, Idaho Mining war of 1892, and at Wardner, Idaho, in 1899, where it guarded arrested strikers. The 24th also served in coal mine disputes in New Mexico in 1920.

Like the other Black regiments, the 24th went to Cuba in 1898. The unit fought at San Juan Hill on July 1, losing eleven men killed in action, and served in the Philippines between 1899 and 1902, losing twelve more. David Fagen, the best known of the soldiers who joined the Filipino revolutionary cause, deserted from the regiment on November 24, 1899. The unit returned to the Islands and served there between 1906 and 1908 and between 1912 and 1915.

The 24th became the first Black regiment to serve in the eastern United States when it was stationed at Madison Barracks, New York, between 1908 and 1911. It went to the Mexican border in 1916, staying until 1922, with its headquarters at Camp Furlong, Columbus, New Mexico. The unit operated on both sides of the border. During the summer of 1917, soldiers of the third battalion became involved in what is known as the Houston Mutiny and Riot. Eighteen men were hanged as a result.

During World War II, the regiment served in the Pacific from April 1942 until August 1945.  Most of the unit spent  much of the war as stevedores, but some elements saw combat in New Guinea as part of the 93rd Infantry Division and on Saipan during the final stages of the war. In August 1945 the 24th regiment became the first and only Black unit in World War II to take the surrender of Japanese forces.  On August 22 an entire garrison of Japanese troops in the Ryukyus Islands surrendered to the unit including “suicide boatmen” who had vowed never to surrender to Allied forces.  Their surrender came twelve days before representatives of Imperial Japan signed surrender papers on the Battleship Missouri before General Douglas McArthur, thus officially ending the war in the Pacific.

The 24th Infantry occupied Okinawa, Japan, after World War II ended and although President Harry Truman’s Executive Order 9981 officially desegregated U.S. military forces in 1948, the 24th remained a predominately Black unit but now with some African American as well as white officers.  In June 1950 they were among the first U.S. troops deployed to Korea.  There Private First Class William Thompson stayed at his machine gun and delayed a North Korean advance near Haman, Korea, on August 6, 1950, until his post was overrun and he was killed. He was the first American soldier to receive the Medal of Honor in the Korean War. Sergeant Cornelius Charlton and Private Ray E. Duke of the regiment also received the medal posthumously for bravery in combat in 1951. The unit lost one-fifth of its officers and one third of its enlisted men on November 30, 1950 when it faced Chinese troops at the Chongchon River in North Korea.  On March 6, 1951 some members of the 24th, again facing Chinese troops at the Han River, tossed their weapons and ran away.  Although most of the regiment performed well at the Han River, the actions of the deserters caused the unit to be deactivated on October 1, 1951.