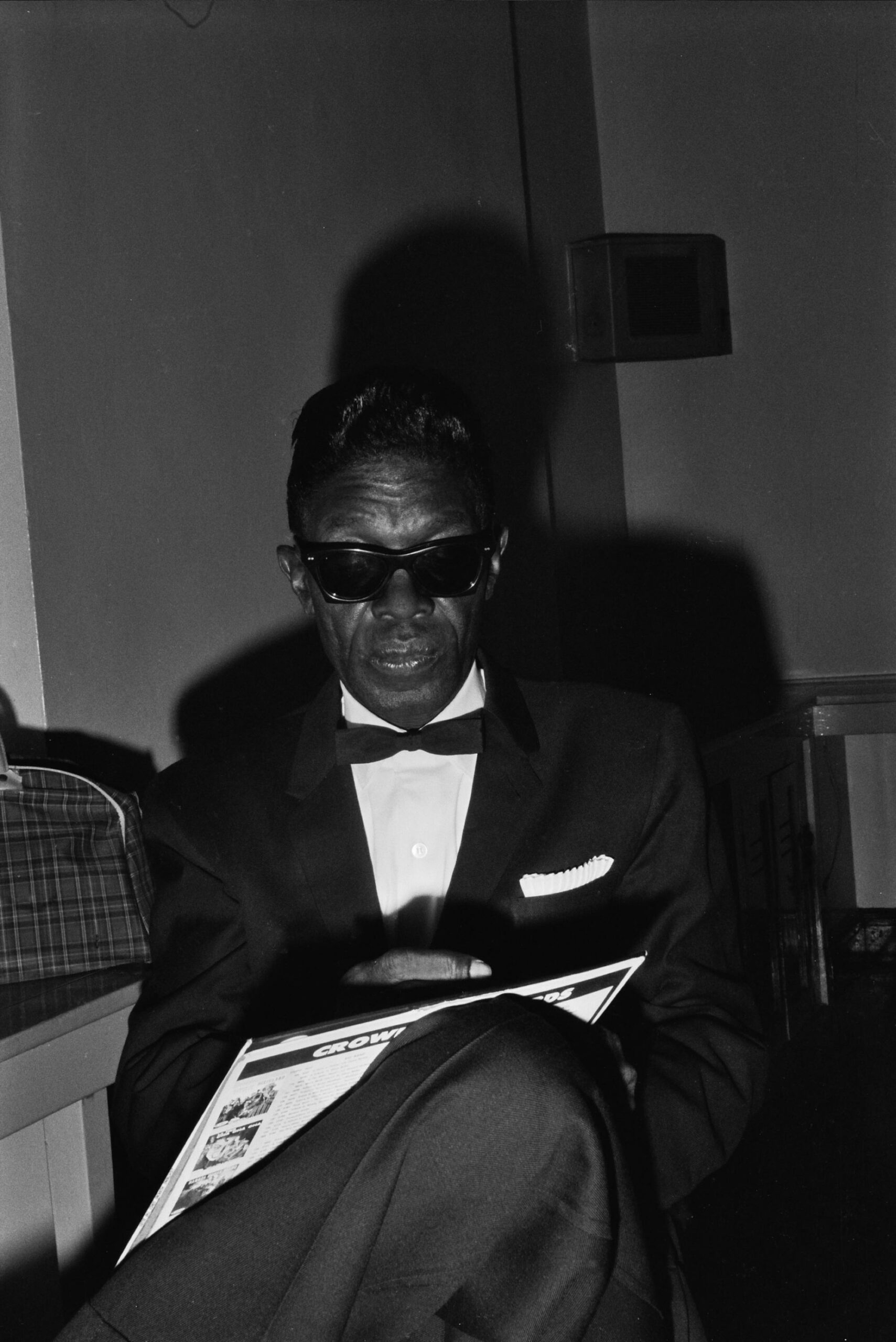 Sam “Lightnin’” Hopkins, blues singer, guitarist, and songwriter, was born in Centerville, Texas in 1912 to sharecropping parents whose exact identities are unknown. At eight, Hopkins met legendary bluesman Blind Lemon Jefferson at a social function in Buffalo, Texas. An accomplished guitarist for his age, Hopkins started to play along with Jefferson’s set, unbeknownst to the blind bluesman. Jefferson stopped the set and called for the intruding guitar player to reveal himself, which Hopkins promptly did. Astonished by Hopkins’ age, Jefferson encouraged him to continue accompanying him, as long as he could “play it right.”

After his meeting with Jefferson, Hopkins felt the blues to be his calling. He continued playing at informal gatherings and social functions throughout Texas. In the early 1930s, Hopkins settled in Houston’s primarily black Third Ward and played on the road across Texas, often accompanied by his older cousin, Alger “Texas” Alexander. Despite rumors of Hopkins having been at Huntsville, the state penitentiary, which enhanced his credibility as a blues musician, there is no record of his ever having served time in the Texas prison system.

Lola Anne Cullum, a talent scout for Aladdin Records, a Los Angeles recording company, signed Hopkins after viewing his performance at a Third Ward bar. Cullum brought Hopkins to Los Angeles to record, where he was partnered with blues pianist Wilson “Thunder” Smith. The two recorded several songs together, including “That Mean Ol’ Twister,” “Can’t Do Like You Used To,” and “West Coast Blues.” Cullum suggested the pair dub themselves “Thunder and Lightning,” hence Hopkins’ longstanding blues name of “Lightnin’.”

After recording over forty songs for Aladdin Records in Los Angeles, Hopkins returned to Houston where he continued to play in local bars, picnics, and other social events. He remained primarily based in Houston’s Third Ward in the 1940s and 1950s.  During that time he recorded for a variety of labels, often offering slightly different versions of the same song for competing record companies.

Hopkins’ career took a dramatic upswing in 1959, however, when folklorist Sam Charters traveled to Houston to record the eponymous Lightnin’ Hopkins (often referred to as the “Folkways Recordings”). This album introduced the bluesman to a national audience with an interest in folk songs and traditional American musical stylings.

After Lightnin’ Hopkins was released Hopkins became a sought after performer in America’s burgeoning folk music scene. He performed at recognizable venues and festivals such as Carnegie Hall in 1960, the American Folk Blues Festival in 1964, and in international festivals in Germany, the Netherlands, and Japan in the late 1960s and early 1970s.

Hopkins remained a prolific recording artist and performer until his death of esophageal cancer on January 30, 1982.