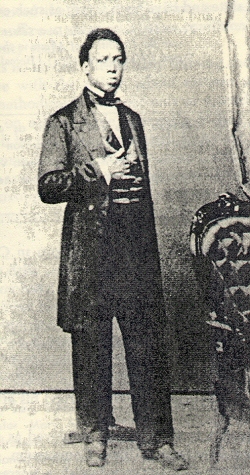 African Americans throughout the North held meetings and church services on January 1, 1863 to celebrate the issuance of the Emancipation Proclamation. Almost always the festivities revolved around a central speaker. One of those speeches was delivered by Rev. Jonathan C. Gibbs, pastor of the First African Presbyterian Church of Philadelphia. Gibbs studied at Dartmouth and Princeton Theological Seminary before assuming his pastorate and was active in the Underground Railroad and black convention movement in the 1850s. After the war, he served as a missionary to freedmen and women in North Carolina and Florida and as Florida’s secretary of state, acting governor, and superintendent of public instruction. Rev. Gibbs’s speech appears below.

THE MORNING DAWNS! The long night of sorrow and gloom is past, rosy-fingered Aurora, early born of day, shows the first faint flush of her coming glory, low down on the distant horizon of Freedom’s joyful day. O day, thrice blessed, that brings liberty to four million native-born Americans. O Liberty! O sacred rights of every human soul! O source of knowledge, of justice, of civilization, of Christianity, of strength, of power, bless us with the inspiration of thy presence. Today, standing on the broad platform of the common brotherhood of men, we solemnly appeal to the God of justice, our common Father, to aid us to meet manfully the new duties, the new obligations that this memorable day will surely impose. The Proclamation has gone forth, and God is saying to this nation by its legitimate constitute head, Man must be free.

Scout, deride, malign this intimation, as the enemies of God and man will and may, the American people must yield to His inscrutable fiat, or the legacy of their fathers will be squandered ‘midst poverty, ignorance, blood and shame. The people must support this Proclamation, heartily, earnestly, strengthening the hands of our government by all the energies and resources they possess, or in a short time the question will not be whether black men are to be slaves, but whether white men are to be free! You had better a thousand times let us into the full light of liberty with yourselves, than that yourselves come into a condition equal to that of the slave at the South. We pray you this day, be just to yourselves, and then to us you must be true.

The black people of this country are thoroughly loyal. We are above disloyalty to the government. You may suspect a Garrisonian Abolitionist, but you cannot possibly suspect us. All our hopes and interests lie in the success of our government. We clearly discern that this is a contest between civilization and barbarism, two antagonistic systems of government, two fundamental principles that oppose each other. The black man is only a sort of accident connected with this struggle. The man who stoops to malign or abuse us as the cause of this war is, in point of intelligence, away down along the apes; he must be given up as a hopeless blockhead. If the same state of things existed in any country in the world, that exists in this, and all parties were white, or were black, just such a contest must come between these two antagonistic systems as we witness this day in our country, and one or the other of these systems must prevail. Which shall it be?

O, God, we appeal to Thee. Let this strife be so decided that justice, truth, honor may not be put to shame. You, my country, entered into a solemn covenant with God in 1776 and declared before highest Heaven that your first and only purpose was to foster and cherish the equality and fraternity of man. How have you kept this covenant? Let Dred Scott decisions, fugitive-slave laws, the judicial murders of Denmark Vesey, Nat Turner, John Brown, Gabriel and numerous others testify.

Feeble-minded men are constantly asking what is to be done with the black, and the only alternative that presents itself to them is to send the bondman to the Torrid Zone where a civilization exists, if any at all, that is so nearly allied to barbarism that he may rationally expect that his posterity will relapse into the darkness of heathenism. And with such a solution they rest satisfied in one direction, but are highly dissatisfied in another, wondering, they say, at our singular obstinacy in refusing to leave our native land and go to Africa or some other hot country. It is our patriotism that prevents us, our strong love for America, our native land.

Give unto us the same guarantee of life, liberty and protection in the pursuit of happiness that you so cheerfully award to others, and make the very same demands of us to support the government you make of others. In a word, enfranchise and arm the blacks North and South, and put them under the intelligent direction of a strong central government at New Orleans, or Charleston, South Carolina. Enfranchise and arm the black man. Let there be no half measures; half measures are dangerous measures in times like these.

Many persons are asking, Will black men fight? That is not what they mean. The question they are asking is simply this: Have white men of the North the same moral courage, the pluck, the grit, to lay down their foolish prejudice against the colored man and place him in a position where he can bear his full share of the toils and dangers of this war? That is the question that all such persons are asking, and no other. We, the colored men of the North, put the laboring oar in your hands; it is for white men to show that they are equal to the demands of these times, by putting away their stupid prejudices. We are not children, but men, and are in earnest about the matter. There is not a battlefield throughout the country, from the days of ’76 until now, but what our bones lie bleaching with yours. I know whereof I affirm, and I challenge contradiction. In the very first resistance that was made to British aggression in the Revolution of ’76 was a black man, Crispus Attucks, who led the attack and was some of the first slain.

Did not a regiment of Rhode Island’s freed blacks on the river Delaware at Red Bank, withstand three successive bayonet charges of British soldiers and finally wipe out the minions of British thralldom? What is the testimony of Andrew Jackson on this subject (a man who knew how to deal with traitors)? What has made the name of Haiti a terror to tyrants and slaveholders throughout the world, but the terrible fourteen years’ fight of black men against some of the best troops of Napoleon—and the black men wiped them out. There are some fights that the world will never forget, and among them is the fight of black men for liberty on the Island of Haiti.

Your destiny as white men and ours as black men are one and the same; we are all marching on to the same goal. If you rise, we will rise in the scale of being. If you fall, we will fall; but you will have the worst of it.

Finally, let us offer the homage of grateful hearts to the friends of liberty and human progress the world over, for the hopes and prospects now before us, confidently predicting that the future will show that no efforts made in behalf of the bondman in this country were in vain. The sum of human happiness in this country will be increased, and God honored by the utter destruction of the hideous system of American slavery.