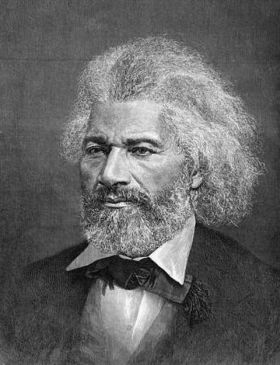 For the first two years of the Civil War black and white abolitionists urged both the liberation of the slaves and the recruitment of African American men in defense of the Union. Barely three months after Lincoln’s Emancipation Proclamation went into effect, Frederick Douglass gave a speech in Rochester, New York on March 2, 1863, titled “Men of Color, To Arms!” which urged African American men to join what was increasingly a war to make real what the Proclamation only promised—complete freedom.

When first the rebel cannon shattered the walls of Sumter and drove away its starving garrison, I predicted that the war then and there inaugurated would not be fought out entirely by white men. Every month’s experience during these dreary years has confirmed that opinion. A war undertaken and brazenly carried on for the per¬petual enslavement of colored men, calls logically and loudly for colored men to help suppress it. Only a moderate share of sagacity was needed to see that the arm of the slave was the best defense against the arm of the slaveholder. Hence with every reverse to the national arms, with every exulting shout of victory raised by the slaveholding rebels, I have implored the imperiled nation to unchain against her foes, her powerful black hand. Slowly and reluctantly that appeal is beginning to be heeded. Stop not now to complain that it was not heeded sooner. It may or it may not have been best that it should not. This is not the time to discuss that question. Leave it to the future. When the war is over, the country is saved, peace is established, and the black man’s rights are secured, as they will be, history with an impartial hand will dispose of that and sundry other questions. Action! Action! not criticism is the plain duty of this hour. Words are now useful only as they stimulate to blows. The office of speech now is only to point out when, where, and how to strike to the best advantage. There is no time to delay. The tide is at its flood that leads on to fortune. From East to West, from North to South, the sky is written all over, “Now or never.” Liberty won by white men would lose half its luster. “Who would be free themselves must strike the blow.” “Better even die free, than to live slaves.” This is the sentiment of every brace colored man amongst us. There are weak and cowardly men in all nations. We have them amongst us. They tell you this is the “white man’s war”; that you will be no “better off after than before the war;” that the getting of you into the army is to “sacrifice you on the first oppor¬tunity.” Believe them not; cowards themselves, they do not wish to have their cowardice shamed by your brave example. Leave them to their timidity, or to whatever motive may hold them back. I have not their timidity, or to whatever motive may hold them back. I have not thought lightly of the words I am now addressing you. The counsel I give comes of close observation of the great struggle now in prog¬ress, and of the deep conviction that this is your hour and mine. In good earnest then, and after the best deliberation, I now for the first time during this war feel at liberty to call and counsel you to arms. By every consideration which binds you to your enslaved fellow¬ countrymen, and the peace and welfare of your country; by every aspiration which you cherish for the freedom and equality of your¬selves and your children; by all the ties of blood and identity which make us one with the brave black men now fighting our battles in Louisiana and in South Carolina, I urge you to fly to arms, and smite with death the power that would bury the government and your lib¬erty in the same hopeless grave. I wish I could tell you that the State of New York calls you to this high honor. For the moment her con¬stituted authorities are silent on the subject. They will speak by and by, and doubtless on the right side; but we are not compelled to wait for her. We can get at the throat of treason and slavery through the State of Massachusetts. She was first in the War of Independence; first to break the chains of her slaves; first to make the black man equal before the law; first to admit colored children to her common schools, and she was first to answer with her blood the alarm cry of the nation, when its capital was menaced by rebels. You know her patriotic governor, and you know Charles Summer. I need not add more.

Massachusetts now welcomes you to arms as soldiers. She has but a small colored population from which to recruit. She has full leave of the general government to send one regiment to the war, and she has undertaken to do it. Go quickly and help fill up the first colored regiment from the North. I am authorized to assure you that you will receive the same wages, the same rations, the same equip¬ments, the same protection, the same treatment, and the same boun¬ty, secured to the white soldiers. You will be led by able and skillful officers, men who will take special pride in your efficiency and suc¬cess. They will be quick to accord to you all the honor you shall merit by your valor, and see that your rights and feelings are respected by other soldiers. I have assured myself on these points, and can speak with authority. More than twenty years of unswerving devotion to our common cause may give me some humble claim to be trusted at this momentous crisis. I will not argue. To do so implies hesitation and doubt, and you do not hesitate. You do not doubt. The day dawns; the morning star is bright upon the horizon! The iron gate of our prison stands half open. One gallant rush from the North will fling it wide open, while four millions of our brothers and sisters shall march out into liberty. The chance is now given you to end in a day the bondage of centuries, and to rise in one bound from social degradation to the plane of common equality with all other varieties of men. Remember Denmark Vesey of Charleston; remember Na¬thaniel Turner of Southampton; remember Shields Green and Cope¬land, who followed noble John Brown, and fell as glorious martyrs for the cause of the slave. Remember that in a contest with oppres¬sion, the Almighty has no attribute which can take sides with op¬pressors. The case is before you. This is our golden opportunity. Let us accept it, and forever wipe out the dark reproaches unsparingly hurled against us by our enemies. Let us win for ourselves the grati¬tude of our country, and the best blessings of our posterity through all time. The nucleus of this first regiment is now in camp at Readville, a short distance from Boston. I will undertake to forward to Boston all persons adjudged fit to be mustered into the regiment who shall apply to me at any time within the next two weeks.