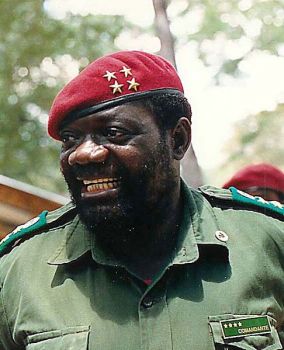 Jonas Malheiro Savimbi, Angolan insurgent fighter and longtime leader of The National Union for the Total Independence of Angola (UNITA), was born in Munhango, Angola on August 3, 1934 to Helena Mbundu Savimbi and Loth Savimbi. Savimbi’s father was a railway stationmaster and part-time Protestant church worker. The local Catholic missions in then-Portuguese-occupied Angola were often in conflict with Loth Savimbi because of the effectiveness of his evangelizing.

Jonas Savimbi attended Protestant missionary schools where he thrived academically. In 1958, he was granted a scholarship from United Church of Christ to attend university in Lisbon, where he began his involvement in anti-colonial politics. The Portuguese secret police detained Savimbi thrice before he decided on finishing his schooling in Switzerland, first at Fribourg University, then Lausanne University, where in 1965 he completed his coursework with honors in political science and juridical sciences. Having begun his studies in medicine, Savimbi would refer to himself as “Doctor” thereafter.

At the urging of Kenyan nationalists Tom Mboya and Jomo Kenyatta, Savimbi joined the Union of Angolan People (UPA) in 1961, where he was made secretary general. The following year, UPA and the Angolan Democratic Party (PDA) formed the National Front for the Liberation of Angola (FNLA). Savimbi became foreign minister of the new organization’s Government of the Republic of Angola in Exile (GRAE), before resigning in 1964 over disagreements with founder Holden Roberto’s leadership style. Two years later, and after obtaining his military training in Maoist guerrilla tactics at China’s Nanking Military Academy, Savimbi formed UNITA.

UNITA became the third major political movement in Angola’s independence campaign, besides rivals FNLA and the Marxist-inspired Popular Movement for the Liberation of Angola (MPLA). Savimbi and his forces, with bases of operation in the east and south of the country, began raiding important sites like the Benguela Railroad, a strategic line for the Portuguese, as well as forces in Zaire and Zambia. The guerrilla leader also used his Maoist training to educate and create loyalty and trust within the peasantry. Savimbi was a charismatic leader; he spoke six languages and mobilized many with his oratory power. UNITA, he claimed, would be multi-ethnic and committed to Angolan unity and tradition-based consensus decision-making as opposed to MPLA’s centralized top-down leadership style.

The Portuguese withdrew from Angola in 1975, ending their colonial rule.  Nonetheless the rivalry between the major insurgent factions continued and quickly evolved into Angola’s bloody 27 year civil war.  Savimbi would become a major player in the conflict as the new nation soon became a staging ground for Cold War rivalries between the United States and the Soviet Union.  MPLA received various forms of military backing from the Soviet Union and Cuba, while UNITA was provided similar support from the United States and, controversially, apartheid South Africa.  The war continued until Jonas Savimbi was killed by government forces in February 2002.