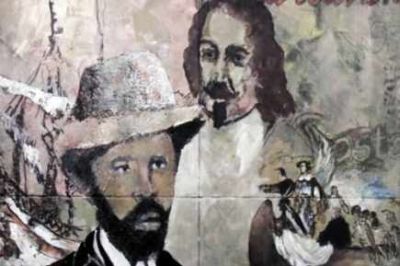 Mathieu Da Costa, a free black seaman, is believed to be the first person of African ancestry to reach Canada and he is the first recorded black man to visit the region of Port Royal in Nova Scotia.  Although little is known of his background before he reached Canada, Da Costa is said to have had some education and was also baptized.  Even his actual name is in dispute.  He was identified as Mathieu Da Costa in English documents, Mathieu De Coste in French documents, and in Dutch documents he was known as Matheus de Cost.

There are conflicting stories as to where and when Da Costa was at different time periods.  Records show him guiding French explorers through the Lake Champlain region.  Between 1604 and 1607 he was a trader with the Acadians — French settlers in early Nova Scotia — when they began commerce with the Micmac Indians along Nova Scotia’s Atlantic coast.  He was described in those accounts as an interpreter of the Micmac and French languages.  Other reports have Mathieu, along with three other men, dying of scurvy during the winter of 1607 in Port Royal, Nova Scotia.  Yet he was also reported to be living in Holland in February 1607.

According to those records, Da Costa was kidnapped from the French by Dutch traders who brought him to Amsterdam.  In 1608 he was said to have signed a three year contract with the Dutch to act as an interpreter and to return to Canada with, or for, Pierre Du Guade Monts.  Apparently Da Costa was captured by the French because by December of 1609 he was imprisoned in La Havre, France.

After that point Da Costa disappears from the historical record.