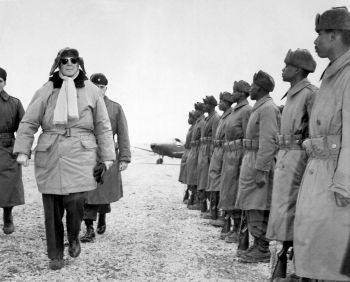 Authorized by Congress in 1866 and activated on November 1, 1869, the 24th Infantry Regiment was one of four all-black regiments created after the Civil War.  The unit remained composed of black enlisted men and mostly white officers until 1951 when it was disbanded during the Korean War after claims of dissent and cowardice were made against the unit due to the race of the enlisted men.

On Sunday, June 25, 1950, units of the North Korean Army crossed the 38th parallel and invaded the Republic of South Korea. The 24th Infantry Regiment, at that time attached to the 25th Infantry Division of the US 8th Army stationed in Japan, was one of the first units assigned to Korea after the invasion.  By July 18, the 24th Infantry Regiment along with the entire 25th Division had been thrust into combat around the South Korean port of Pusan. The 24th experienced the same dismal performance common among many US Army units in the first few months of the Korean War as they all fought for survival against the numerically superior North Koreans.  Nonetheless they were branded as poor soldiers because of their race.

By July 31 as the 24th was engaged in heavy fighting, desertions reached pandemic proportions. Military Police units were stationed on the roads returning from the front to arrest deserters.  When Lt. Leon Gilbert, the lone black officer with the 24th, refused to follow the orders of his white commanding officer to return to the front with his men into positions he had just been forced to leave, Gilbert was arrested on the spot and sent to court martial proceedings where he was sentenced to death. An outpour of public emotion succeeded in persuading President Harry Truman to commute Gilbert’s sentence to 20 years in prison although he would  serve only five. The incident demoralized the unit and made it the object of additional distrust and derision by white soldiers.

Despite these problems individual soldiers in the 24th continued to show great courage. On August 6, Private First Class William Thompson singlehandedly stymied an enemy attack while his platoon withdrew to reorganize.  He died from wounds two weeks later and was awarded the first of two Congressional Medals of Honor to African American soldiers in the Korean War. On September 1, however, the 2d Battalion of the 24th Regiment collapsed under enemy attack and large numbers of stragglers left their positions, making those still engaged in battle vastly outnumbered.

At this point Eighth Army command ordered the 24th regiment to disband. Because the Eighth Army was unable to organize a new regiment in its place, the 24th continued to serve as an active Infantry Regiment for a full year after the decision. In that time the unit began to see some improvement as it gained combat experience and new officers.  Yet it was defeated again in December 1950 when Chinese troops unexpectedly entered the war and forced all US military forces in retreat. Company C of the 24th was forced to surrender after being abandoned and surrounded by the Chinese Army.

The regiment took part in the counter attack by U.S. and U.N. forces in the summer of 1951. For the second time in the Korean War an African American soldier won the Congressional Medal of Honor.  Sgt. Cornelius H. Charlton took over command of his platoon after its officer was killed and successfully led it on successive assaults against heavily entrenched enemy positions. Stories such as these however received little press attention and were never taken into consideration by those in the Army who wanted to see the end of the 24th.

On October 1, 1951 the 24th Infantry Regiment was relieved from front line duty so it could be dissolved.  That day marked the end of the 82 year history of the regiment.  Although issues of its performance certainly drove the dissolution of the unit, the U.S. Army cited Executive Order 9981 issued by President Harry Truman in 1948, integrating the U.S. military as the official reason for the end of the 24th Infantry.