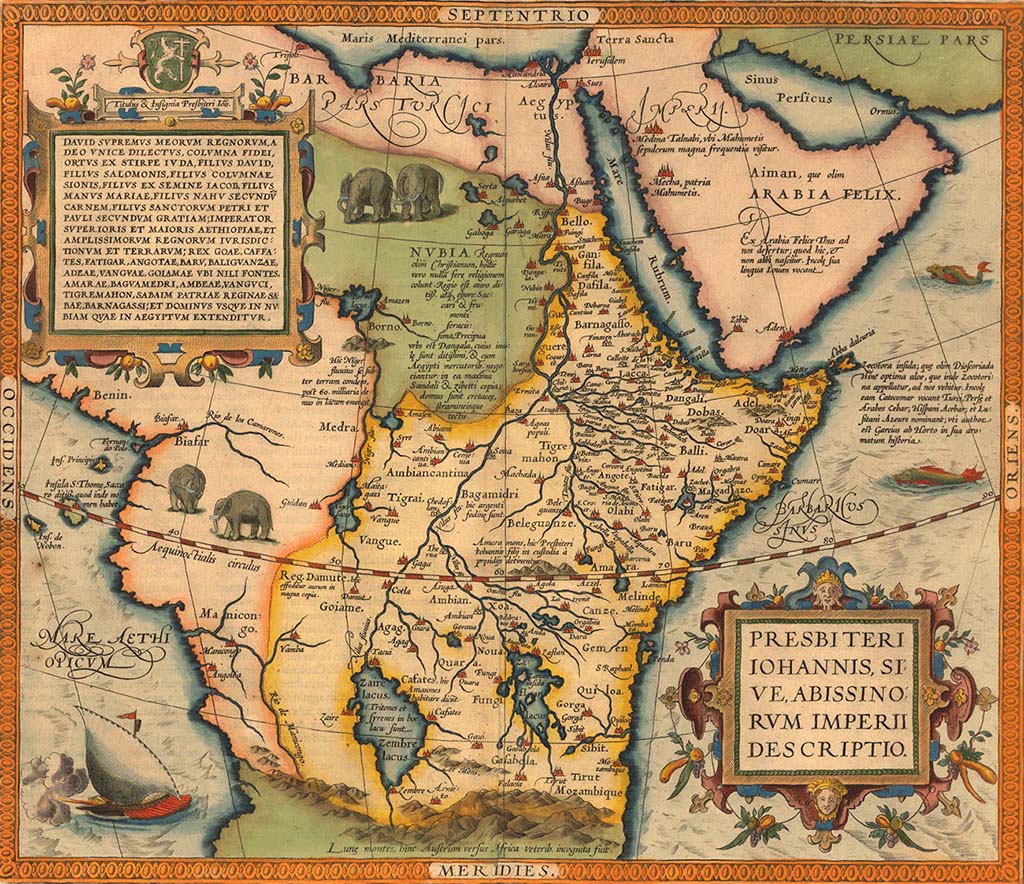 The legend of Prester John, a wealthy Christian king with a kingdom somewhere outside of the Western European realm, pervaded European thought throughout the Middle Ages.  The limited understanding of the unexplored regions of the world and the inability to find his kingdom resulted in shifting versions of the legend.  Over the course of the Middle Ages, Europeans believed his kingdom existed in the Far East, India, and, finally, the interior of Africa.

The origin of the legend of Prester John is traced to Bishop Otto of Freising in the 12th century.  According to the bishop, Prester John descended from one of the three Magi mentioned in the Nativity story of the Bible.  The emergence of the legend coincided with the first Crusades of European armies into the Near East.  The legend then seems to indicate a hope for a powerful kingdom that could serve as an ally in the European campaign to recapture Jerusalem.  The prospect of a Christian king seemed realistic enough that, in the in the 12th century, Pope Alexander III sent a message by envoy to the fabled king; the messenger, however, never returned.  In 1165, a letter sent to several European capitals from an Ethiopian ruler fueled the legend; this letter reportedly became known as a letter from Prester John. This letter established a concrete connection between Prester John and Africa.

By the 15th century, the legend had resurfaced as Italian and Portuguese explorers became more interested in the natural resources of Africa.  Portuguese explorers traveled down East Africa in search of the Christian kingdom of Prester John; they sought to gain the allegiance of the reportedly powerful kingdom and to aid in the conversion of Muslims in Africa to Christianity.  With the conversion of these states the Portuguese hoped to establish control over the region to meet their commercial and military goals.

By the late 15th Century Portuguese explorers did make contact with the Christian king in Ethiopia and wrote descriptions of the court, the state, and its people.  These descriptions and their correspondence provide historically valuable insight into the Ethiopian kingdom of the time.  The Portuguese viewed the wealth of Ethiopia as the source of gold for King Solomon’s temple, conflating the legend with the biblical story of King Solomon.  The emperor of Ethiopia at the time, Zara Yaqob, notably wrote European rulers expressing his incredulity and dislike of the title “king” and the attribution to Prester John.  The legend of Prester John in Africa and particularly Ethiopia became one of the reasons for early European exploration of the African coast.