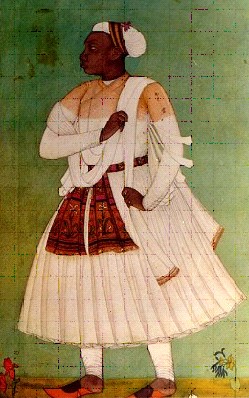 In the following article historian Omar H. Ali explores a lesser-known aspect of the global African Diaspora, the spread of African peoples and their cultures throughout the Indian Ocean basin.

Africans had become a visible part of the Indian Ocean world long before the advent of Islam in the seventh century C.E. For over half a millennia prior to the formation of the initial ummah wahida-community of Muslims-in western Arabia, Africans were enslaved and taken across the Red Sea and Gulf of Aden to the Arabian Peninsula and as far away as the Indian subcontinent. In time, the descendents of Afro-Arabs would become among the leading sailors in the region. Guiding dhows propelled by seasonal winds, these mariners transported and traded a range of commodities, including slave cargo, between Africa, the Middle East, and South Asia. Men and women of African descent would assume a variety of subaltern positions in the Indian Ocean world, from concubines, domestic servants, pearl divers, tea and date plantation workers, to bodyguards, palace guards, and soldiers. The founding and spread of Islam by the Prophet Muhammed and his followers beginning in 610, and continuing over the next centuries, would extend and build upon an existing African Diaspora in the Indian Ocean world.

Within the first four centuries of its founding, Islam spread as both a religion and a political force. From the Arabian Peninsula, Muslims moved down the Zanj (parts of the East African coast) and eastward to the areas comprising modern-day Iraq, Iran, India, Sri Lanka, and beyond. By the fourteenth century, Muslim-ruled city-states dotted the East African coastline and gained popular support in Malaysia and Sumatra (Indonesia); by the mid-sixteenth century, Islam had not only become dominant in northern India but counted a number of vibrant communities in distant China. During the Yuan and Ming dynasties, Muslims enjoyed protected status and even held high-ranking government positions-as with the Admiral Zheng He, who led an imperial fleet to East Africa in 1414.

As was the case in its westward expansion across North and West Africa, Islam took hold in the Indian Ocean through a combination of trade, military conquest, and peaceful conversion-the latter mostly done through the work of Sufis (Muslim ascetics). In the process of its expansion, Muslims incorporated themselves into a range of social and political organizations; in addition to merging culturally, they also created syncretism-new religious and philosophical outlooks, such as Din i-Ilahi, promoted by the Mughal Emperor Akbar, which combined elements of Islam, Hinduism, Jainism, Christianity, and Zoroastrianism.

African Muslims and Kaffirs (“non-believers”) would form distinct, albeit largely marginalized black communities in the Indian Ocean world. African Muslims helped to further Africanize Islam, as was the case in South Asia, with increasing numbers of Africans (either Muslims before leaving Africa, or converting to Islam thereafter) forming part of the ummah east of the River Nile. While most Muslim Africans in the Indian Ocean world were ordinary men and women who had been enslaved or whose legal and social status lay somewhere in between slavery and freedom, some gained significant prominence. Among these men and women were Bilal ibn Rabah, “the Ethiopian” (al-Habashi).

According to the hadith (traditions of the Prophet and his Companions) among Muhammad’s earliest converts was Bilal. The “son of an Abyssinian slave-girl” became a Sahabah, a trusted Companion of the Prophet, as well as the new religion’s first muezzin-the person who calls Muslims to prayer. Bilal professed that there was only one god, Allah. As a slave, Bilal suffered greatly under a non-Muslim master who tortured him in an effort to get him to recant his faith. Having heard of Bilal’s tenacity, Abu Bakr (later Sunni Islam’s first Caliph) emancipated him. Following a dream, Muhammed himself asked Bilal to serve as the community’s first muezzin.

Bilal fought alongside the Prophet in the most critical battles during the earliest days of Islam, including the searing Battle of Badr in 624 against the Quraysh tribe of Mecca. Described as “tall” and “dark,” with lean features, Bilal lived for a time in Basra, the major port-city of southern Iraq. There, three centuries later, under the Abbasid Caliphate, tens of thousands of enslaved Africans launched what became one of the largest slave rebellions in world history.

In both size and scope, the Zanj Rebellion of 869-883 rivaled both the Saint Domingue slave uprising of 1791-1804 and the U.S. southern slave revolt of 1861-1865. Tens of thousands of enslaved men and women taken from the Sahel, the Horn of Africa, and other parts of eastern Africa-working under some of the most brutal conditions removing salt from the crust of the land surrounding Basra-took up arms against their slave masters. Their revolt was not the first recorded in the area of southern Iraq: a black slave, Rabah Shir Zanji (the “Lion of the Zanj”), led a rebellion in Basra in 694-695, less than two generations after Bilal had lived there. Armed revolts continued to erupt in this part of the Persian Gulf but the Zanj rebellion of the late ninth century was on an unprecedented scale.

Led by the free Persian ‘Ali b. Muhammed, the bulk of rebel soldiers under his command were African in origin (there were also white slaves involved in the revolt). The uprising-prefiguring by nearly one thousand years the Quilombo dos Palmares maroon settlement in Brazil and the Haitian republic in its infancy-led to the formation of a new government in southern Iraq. In defiance to the Abbasid Caliphate, the black rebels organized their own state, with its own standing army, buildings, and even minted coins (forming part of the archeological record on the revolt). The rebellion-turned-state lasted fourteen years, that is, until the Zanj forces were overwhelmed by Abbasid military force.

Among other Africans in the Indian Ocean world who rebelled with force were five-hundred black slaves in Cairo, Egypt in 1146. Mounted atop the very Arabian horses which they were charged to care, these rebels on the Lower Nile, like those in southern Iraq two and a half centuries earlier, briefly set up their own state; like the their predecessors, they too were crushed by military force. Still other rebellions were launched by Africans in the eastern Diaspora, and well into the nineteenth century- in 1856 hundreds of black slaves revolted, for instance, on the island of Mayotte north of Madagascar. Most Africans in the Indian Ocean world, however, would assimilate into their local societies, which sometimes meant converting to Islam.

Men and women of African descent in the Indian Ocean world would convert or assume an Islamic identity for a number of reasons. Many did so for the purposes of enjoying what was connected to being Muslim in terms of extensive trade networks, intellectual prestige, and political support.  Others became Muslims as a matter of genuine faith. One thousand years after Bilal, an exemplar of faith, another notable African in the Indian Ocean world would likewise declare himself a servant of Allah.

Al-Habashi Malik Ambar, born in Ethiopia circa 1550, was enslaved as a young man before converting to Islam. He changed his name from Shambu to Ambar, and was later dubbed Malik-“king.” He remains the best-known African Muslim on the Indian subcontinent. Noted for his intellectual abilities by his various slave masters, he was first educated in administration in the Hejaz (western Arabia), before being taken to the port city of Mocha in southern Arabia, followed by Baghdad, and then finally arriving in central India’s Deccan, the plateau which comprises most of the Indian peninsula.  Ambar’s abilities and skills continued to be recognized in India where he was duly promoted to ever-higher positions of authority. Under the King of Bijapur, Ambar was eventually given command of Arab and Habashi military troops. In 1590, however, he rebelled and formed his own army, comprised of 1,500 cavalry and infantrymen, many of whom were black. The fugitive slave was now a mercenary general with a mobile armed force. Over the next set of years he fought for various rulers in the Deccan and fended off Mughal efforts to take control of the region.

In 1602 Ambar decided to seize the kingdom of Murtaza II and made himself Regent-Minister. Much to his frustration, the Mughal Emperor Akbar was unable to defeat Ambar in the Deccan, a task which was left to his equally frustrated successor, the Emperor Jahangir, who continued to be repelled by Ambar’s forces. Although Jahangir largely expressed disdain for the Habashi, he was eventually forced to concede the effectiveness of his opponent’s military tactics. By 1616 Ambar was commanding a 60,000-strong cavalry force, using British artillery, and would form a naval alliance with Siddis (other African-descended South Asians) on the fortified island of Janjira to cut off Mughal supply lines. Over the course of his campaigns Ambar notably infused his army with hundreds-indeed thousands-of Habshi slaves, whom he trained, provided an education in the Qur’an, and drew upon for his private guard.

Ambar founded the city of Khadki, a model capital, with canals and an outlying irrigation system; he directed the construction of buildings, many of which were either incidentally or purposefully made of black stone, introduced a progressive tax system, and supported Islamic scholarship. Like Akbar, Ambar was also distinguished for his religious tolerance. He granted land to Hindus, patronized Hindu scholars, and appointed Brahmins as officials and tax collectors. When the Habshi ruler died in 1626, he left one of the greatest legacies of any ruler in the Deccan.

Unlike the extraordinary Malik Ambar, most Africans in the Indian Ocean world today (as was the case in Ambar’s own time) remain poor and politically marginalized. Their presence may be seen among the Yemeni and Omani populations (in the southern part of the Arabian Peninsula), in the black communities of Bandar-e-Abbas in southern Iran, in the Indian state of Karnataka, and in the Puttalam District of northwestern Sri Lanka. African-descended men and women in southern Iraq currently form sizable communities in and around Basra. Inspired by the success of the African American (of East African, as well as Muslim descent) Barack Obama in the 2008 U.S. presidential primaries, black community leaders in Basra decided to run for office for the first time. In Hyderabad, with the largest concentration of Muslims in India, descendents of those who previously served the Nizam (ruler of the former state) as soldiers continue to live in the “AC” (African Cavalry) Guards District; and, in Sri Lanka, Kaffir descendents of slaves and mercenary African soldiers in the town of Sirambiyadiya maintain a rich tradition of their collective African past through song, dance, and oral history.