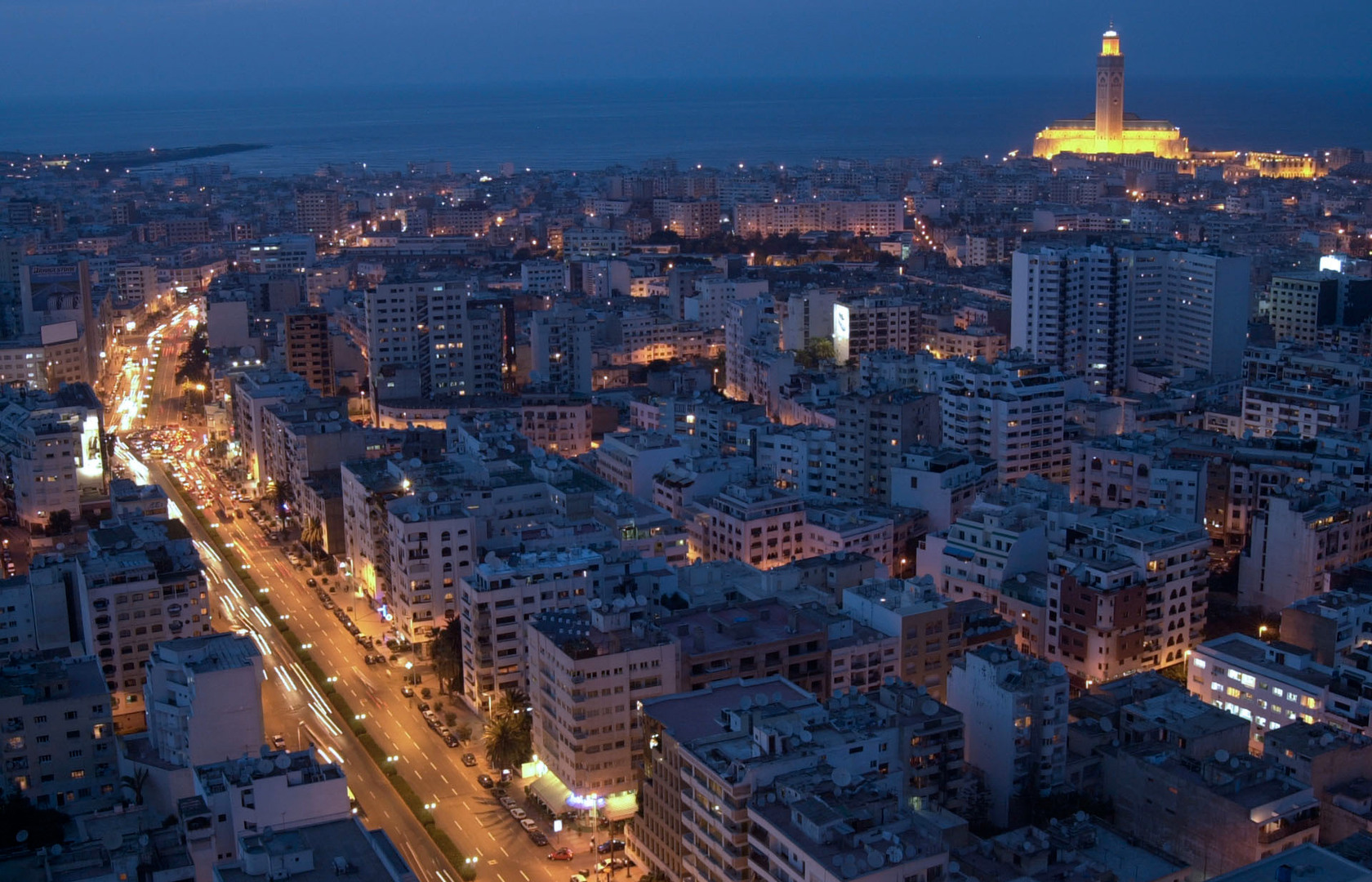 Casablanca (al-Dar al-Bayda in Arabic; “white house” in English) is Morocco’s center of cultural and commercial activity and one of the largest metropolises in contemporary Africa. A port city on the coast of the Atlantic Ocean, it is the center of the nation’s rail and road networks. In 2005 Casablanca’s population was estimated at 3.8 million, roughly ten percent of Morocco’s inhabitants.

Early traces of settlement in Casablanca point to possible Phoenician and Roman presences. In the 13th century a Berber outpost named Anfa existed in the south of the city. Anfa was repeatedly destroyed by the Portuguese between 1486 and 1489, and was renamed after a white house (“Casa Branca”; later, “Casa Blanca” in Spanish) that stood on the ruins of the city. Casa Blanca later served as a coastal fortification under the rule of Sultan Muhammad III, who rebuilt the city and brought Berbers and Arabs from the southwestern regions for settlement. In the late 18th century a substantial trade in grain exports was established with Spain before a revolt in Chaouia closed local ports in 1794. When the port was reopened in 1831, it primarily sold agricultural wares such as hides, grain, and wool. The city’s population was growing rapidly, as was the presence of European merchants.

By 1906 Casablanca overtook Tangiers in total trade volume (around 14 million gold francs). The 1906 Conference of Algeciras established a French colony, and soon afterwards French builders and customs officers began construction of their own port in Casablanca. In July 1907 riots broke out in response to French encroachment, oppressive foreign loans, and the construction of a rail line over a graveyard. The unrest allowed the French to then bombard the port and, in August of that year, arrive with Spanish troops. French and Spanish dominion in Morocco was established soon afterwards. French merchants constituted the bulk of the European presence, and Casablanca became France’s economic center in Morocco, while Rabat became the political capital.

After the 1912 establishment of the French protectorate, the city’s population grew rapidly from 40,000 in 1914 to over a quarter-million residents in 1936, about a third of whom were European. By 1952 Europeans comprised around one-fifth of Casablanca’s population (133,000), while ten percent its residents were Jewish (75,000), of which about one-third were Moroccan Jews.

French rule ushered in European land speculation and a thorough redesign of the city incorporating European, Islamic, and Moroccan styles.  The French also constructed new boulevards, expanded the port, and established a cathedral, post office, city hall, and courthouse.  French rule also marked the intensification of residential segregation with the rise of shantytowns (bidonvilles) and the rapid expansion of European suburbs. French workers also imported socialist politics. Moroccan and European workers engaged in a string of public and private-sector strikes in the summer of 1936. By the 1950s, Morocco’s anticolonial resistance had also reached the city.

Casablanca, once described as France’s “Los Angeles” (California), became the largest city in the new nation of Morocco, which won independence in 1956.

In 2011 during the Arab Spring, Casablanca became a major site of political organizing in Morocco, with protests often attracting tens of thousands of participants.