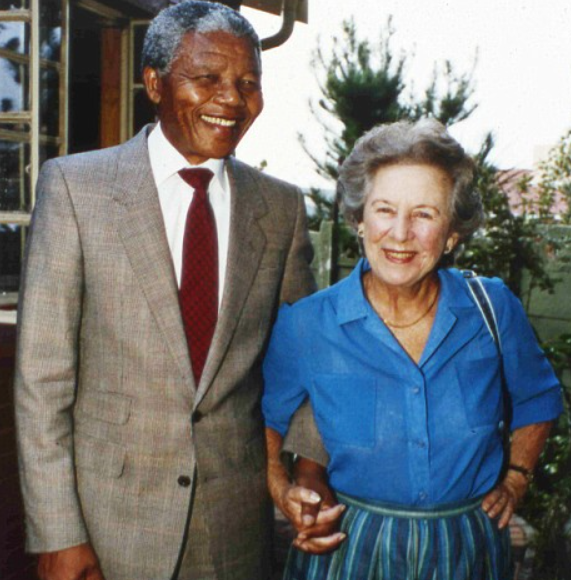 In the wake of Nelson Mandela’s passing on December 5, 2013, tributes came forth from around the world and more than 100 heads of state attended his memorial service in South Africa.  One such tribute, a eulogy to Madiba (his clan name), was paid at the Seattle Rotary Club meeting on December 11, 2013, by Paul Suzman, now a prominent Seattle businessman and the nephew of Helen Suzman, a long-time member of the South African Parliament and one of the most important non-black opponents of the Apartheid system.  Paul Suzman’s tribute appears below.

Ladies and gentlemen, Rotarians and guests:

You may wonder what a football is doing on the podium. It is actually a rugby ball.
Given the unusual role that rugby played in Nelson Mandela’s political life I thought it would be an adornment of which he would approve. I am also, today, wearing the official necktie of the 1995 Rugby World cup which was held in South Africa the year after he was elected president. He would like that.

Last year, I was fortunate to attend an exhibit at the British Museum in London entitled “Shakespeare; Staging the World.” And in place of honor, the very last exhibit was the “Robben Island Bible.”

It is the complete works of William Shakespeare smuggled onto that island by another political prisoner, Sonny Venkatrarathnam, disguised as a Hindu holy text.

You see literature was originally not permitted on that bleak windswept rock in case it should give the inmates the wrong ideas.

It did exactly the opposite. It gave them the right ideas.

Nelson Mandela recognized a global truth. It is education; it is literature that sets people free.

Even if his body was to be trapped, for the rest of his life, as far as he knew, in the limestone quarries of that forsaken place, surrounded by the unforgiving depths of a greasy grey Atlantic, the Robben Island Bible could transport him and his comrades to Elsinore and Venice, to Harfleur before St. Crispin’s day, or to the steps of the Senate in ancient Rome.

It was words, thoughts and soaring oratory that kept them going through the darkest of days. Those, and the unshakable belief in themselves and the righteousness of their cause.

These are lines that Mandela would repeat to himself in his tiny cell. From his favorite poem, “Invictus.”

Mandela believed that even his young Afrikaner warders were, themselves prisoners, of circumstance and ignorance. So he insisted that they too study. And by sheer force of will and transcendent spirit he conquered these forbidding circumstances, and elevated this grim prison to the status of a veritable University. With Shakespeare at the center of the curriculum.

The ongoing memorial ceremonies and celebration of his life have been inescapable these last few days so I will try to avoid repetition of the well published encomia from heads of state across the globe.

We must ask ourselves, however, who was this man that radiated such graciousness and statesmanship and who preached and practiced reconciliation despite the injustices and indignities heaped, for decades, upon himself, his family and his people?

He was an enigma. Loyal to a fault. He maintained friendships with the Castros, Gadhafis and Arafats of the world despite their political toxicity to much of the West. Yet he forever foreswore the divisive poison of tribal nepotism and racial enmity that lies at the root of so much conflict.

He was an imperfect husband and father and acknowledged as much with humility and without excuse. He was prideful at times, and could be irascible. But throughout he seemed to heed Shakespeare’s Polonius

To thine own self be true, and it must follow, as the night the day, thou canst not then be false to any man.

Ladies and Gentlemen, I would submit that he caused the entire world to recalibrate not only the standards by which statesmanship on the continent of Africa would henceforth be measured, but he has reset the bar for all leaders, everywhere. He has, simply, redefined what it is to lead.

As we honor Nelson Mandela today and celebrate his life, allow me to take you all back 14 years. It was September 1999. And we had just got word that he and his wife Graca Machel were coming to Seattle. And this Rotary club was to have the opportunity of hosting them.

Arrangements were made with Maestro Gerard Schwartz to hold the event at Benaroya Hall and, given our guest’s love of music, a concert would be held in his honor.

We would include all of Seattle’s school principals and vice principals and as many children as possible, including a choir to sing the new national anthem of the world’s youngest democracy.

Then we had an even better idea. I called Zelda la Grange, the fiercely protective young Afrikaner who Madiba had selected as his personal secretary. She who guarded him like a lioness.

“Zelda…how would the president like to conduct the Seattle Symphony Orchestra?” I asked.

The next day she called me back “The president says that he’s never conducted an orchestra before” she told me.

Without thinking I responded, “Well…he’d never run a country before either and he’s doing a pretty good job at it isn’t he?”

There was an intake of breath, a disapproving pause, before she said curtly, “Ek sal u terug bel.” “I’ll get back to you.”

Less than an hour later she called back, laughing. “Madiba told me to tell you that he thinks you are very cheeky. He’d love to do it.”

And I remember, just before the concert, in Gerard Schwartz’s office watching Seattle’s maestro present, with a new baton, the conductor of my motherland’s transition to democracy, and then coach him in how to conduct an orchestra.

Later, immediately after the Symphony’s performance in his honor, I had an other-worldly experience.

I was escorting Madiba, surrounded by Secret Service agents, through Benaroya Hall’s passageways down to the stage, all the while listening to him and Zelda chatting away confidentially in Afrikaans.

And I was, reminded of the words he had written while on Robben Island.

“Few things are more exciting to me here than to listen to a man’s background, the factors that influenced his thoughts and actions, the unknown battles he has fought and won.”

And then, hire his daughter as your most trusted secretary.

For those of you here today who remember that occasion, Madiba covered many subjects. Global politics, race relations, and HIV Aids prevention. He did not pull punches.

After the event I asked the high school age daughter of a friend what she thought.

“I loved it” she said “but I never thought I’d be getting a lecture from an eighty year old man on safe sex.”

My aunt, Helen Suzman was, effectively, in the 1960s and 70s, the sole opposition parliamentarian, and she insisted on visiting Robben Island repeatedly.

She was fiercely outspoken about conditions there, and whenever she was scheduled to visit, extra blankets were issued and conditions improved temporarily. She and Mandela became firm friends.

My aunt, Helen recounted to me, a few years before she died, a treasured memory. About a week prior to the signing of the new South African constitution in early December 1996, two years after Nelson Mandela had become president, she received a call from Zelda. And this was the gist of the conversation:

“The President,” she was told, “wants to know what you are doing on the 10th?”

“What does the President want me to be doing?” Helen responded.

“He’ll pick you up at your house,” she was told.

Which is what he did.  Exactly 17 years ago yesterday. And after a helicopter ride from a nearby rugby field they arrived at a stadium in Sharpeville packed with ecstatic ANC supporters waiting to witness the signing of one of the world’s most liberal constitutions, created with the help of scholars from around the world. An effort chaired by Cyril Ramaphosa who accompanied Madiba to Seattle and who is now the Deputy Vice President …next in line to lead the country.

Helen was warmly greeted by dozens of Robben Island University alumni who were now part of the new regime. She was not someone who was easily moved, but moved she was that day, and deeply.

And later on that summer afternoon, when her old friend dropped her off at home he said, simply “Helen, you had to be there.”

He was a politically canny man.

Like President Lincoln 130 years earlier he recognized the value of a Team of Rivals, of gathering his opponents around him.

And just as Ulysses S. Grant, at Appomattox in 1865, had treated with deference and respect the defeated Robert E. Lee, and told him that his men should take home with them their horses and side-arms to start rebuilding a war torn nation, so did Mandela instinctively understand that you always allow your former foes to retain their dignity. Never denigrate anyone.

As he said at his inauguration:

Never, never and never again shall it be that this beautiful land will again experience the oppression of one by another.

He would have made a wonderful Rotarian, as he instinctively applied the four way test to everything and everyone he touched.

Ladies and gentlemen, allow me to take you back to the British Museum late last year.

The well-thumbed Robben Island “bible” stood open, in its protective glass case, at a soliloquy, by Julius Caesar, shortly before his assassination. Each word was underlined in ink, and initialed in the margin by Nelson Mandela. Caesar exclaims:

“Cowards die many times before their deaths;
The valiant never taste of death but once…”

The valiant never taste of death but once…

It was 113 years ago that a lovely hymn was played publicly for the first time in a small church in Johannesburg…. The opening words ask that “God Bless Africa”
“Nkosi Sikelel” iAfrika.

I would suggest that on 18 July 1918, at Mvezo on the Mbashe River, at the birth of Nelson Rolihlahla Mandela, God did indeed bless not only Africa but the entire World.

May we all honor a life well lived by trying to emulate its graciousness.

I will ask you now, in honor of a most valiant man, please to stand, for a moment of silence.

POSTSCRIPT:  BlackPast.org urges you to support VillageReach, the charity which was established in Seattle in 1999. VillageReach’s initial project was to expand access to viable vaccines in Mozambique’s northernmost, least accessible provinces.  The program which continues to this day is expanding to additional provinces, and has ensured the vaccination of hundreds of thousands of children in otherwise underserved communities. VillageReach is now also involved in helping strengthen health systems in other African countries.  President Mandela and Ms. Machel became, and remain, honorary board members of the organization which was born of their Seattle trip.  Paul Suzman continues to serve on its board of directors.

“I Remember Madiba: Honoring the Life of Nelson Mandela,” Eulogy Given
at the Seattle Rotary Club, Seattle, Washington, December 11, 2013.
Reprinted with the Permission of Paul Suzman.