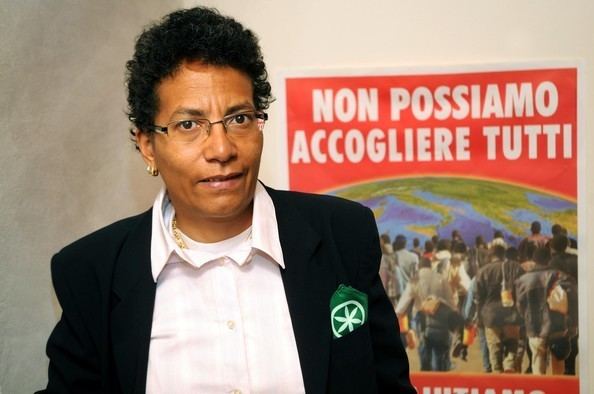 Sandra “Sandy” Maria Cane was born in Springfield, Massachusetts, the younger of two daughters of an African American father, a US Army paratrooper during World War II, and an Italian mother, whose family had established a stonemason business in northern France.  At age 10, in 1971, Cane’s parents divorced and she moved from Springfield to her mother’s hometown of Viggiù, Italy, roughly 31 miles northwest of Milan in the foothills of the Italian Alps.  Interviewed about the nearly four decades she had spent in her adopted country, she professed deep affection for the people of her province and said she had experienced an incident of blatant racism “only once, by a drunk guy in a nightclub.”  A college graduate, Cane worked as a translator and a tour guide, and had fashioned a successful career in the hospitality industry, managing hotels from Stresa to Florence, before taking the plunge into politics.

Claiming that she voted for Barack Obama in the 2008 Presidential election, she also confessed her early attraction to the rightist Northern League (Lega Nord), which was her party affiliation in June 2009 when she was narrowly elected mayor of Viggiù.  Though the remote town has a population of only 5,300, the historic election of the first-ever mayor of African heritage in Italy made headlines worldwide.  But the glow of her triumph was dimmed by her statements in defense of her party’s push to crack down on illegal aliens.  International attention on Cane soon faded and she was left alone to attend to her official duties and to make good on her promise to create jobs, boost tourism, and spruce up her municipality, which she described as “beautiful but dirty.”

In the spring of 2013, with the appointment of Cécile Kyenge, a naturalized citizen from Africa, as Minister for Integration in the coalition government of Prime Minister Enrico Letta, Cane was again quoted as downplaying not only the extreme anti-immigration rhetoric of popular leaders of the Northern League but also the vulgar, racist characterizations of Kyenge by party members reported by the world press.  Long associated with xenophobia and disdain for southern Italians, the Northern League seemed an unlikely political refuge for a foreign-born person of color.  Nonetheless, Cane, like Nigerian-born Northern League administrator Tony Iwobi, provided cover for the party’s far-right members who could cite them as examples of the party’s tolerance, fair-mindedness, and good intentions.

In 2009, Cane reaffirmed her support of Umberto Bossi, then leader of the Northern League, who had declared that African immigrants sailing toward Italy should be intercepted and bombarded with cannon fire that “blows everyone out of the water.”  In explaining her support for the party’s opposition to relaxing laws that would allow foreign and Italian-born nonwhites an easier path to citizenship, Cane commented: “People think the League is racist but now it is much stronger and more mature than it once was.  It is not racist to be against illegal immigration.”  And in 2013 when another party member, Mario Borghezio, was expelled from the European Parliament for making numerous racist remarks, some of which were directed at Kyenge, Cane volunteered to gather signatures for a petition to return him to office, arguing that “Mario says things that are colorful but he is not a racist Nazi.”

One of the most widely viewed Internet photos of Cane shows her posed in front of a Northern League poster that pictures a horde of dark-skinned people supposedly trekking from Africa to Italy that reads “We Can Not Accept All.”  Cane, whose personal life until now has escaped notice of the press, will finish her term as mayor of Viggiù in 2014.  Her current home is located in Gressoney-La-Trinité, a remote resort town close to the Italian-Swiss border.