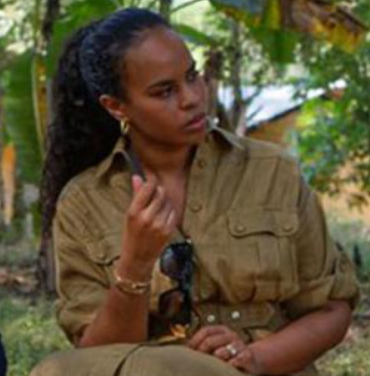 Sabrina Dhowre is a Somalian-American professional model and social media personality. She was born on July 16, 1989 in New York, and grew up in Montreal, Canada. Her mother Maryam Egal was born in Somalia but now resides in British Columbia. After graduating from high school, Dhowre enrolled at Howard University, earning her Bachelor’s in English in 2001.

As a social media personality, Dhowre has acquired over three hundred thousand Instagram followers, and was the winner of the Ms. And Mr. Vancouver pageant in 2014. She was previously the host for the UK-based fan show Luthera Star’s other Half. Since then has walked in a Rolan Mouret fashion show and been featured in British Vogue and Harrods Magazine spreads in 2019.

Dhowre met British actor Idrissa Akuna “Idris” Elba at a Jazz bar in Vancouver in 2017. The couple began dating and were engaged on February 10, 2018, after Elba proposed at a screening of his directorial debut film Yardie at an East London cinema. The two married on April 26, 2019 at the Ksar Char Bagh Hotel in Marrakesh, Morocco. The following wedding celebrations were spread out over three days. In February 2020, the couple announced they were starting a lifestyle brand called Sable Labs. The first project has been named Coupledom, a podcast focused on couples sharing their goals and dreams together.

When her husband Idris tested positive for COVID-19 in March 2020 while filming in New Mexico, he went into quarantine. Sabrina Elba immediately went to care for him. Days later, she tested positive for the virus as well. They both suffered only minor symptoms and have since made full recoveries.

The couple had previously traveled to Sierra Leone in December 2019 with the United Nations International Fund for Agricultural Development (IFAD), to see how the organization was assisting people in the region. They also serve as brand Ambassadors for U.N. Goodwill and have launched a new fund to assist in flattening the curve of the COVID-19 impact on farmers and food producers in rural areas.