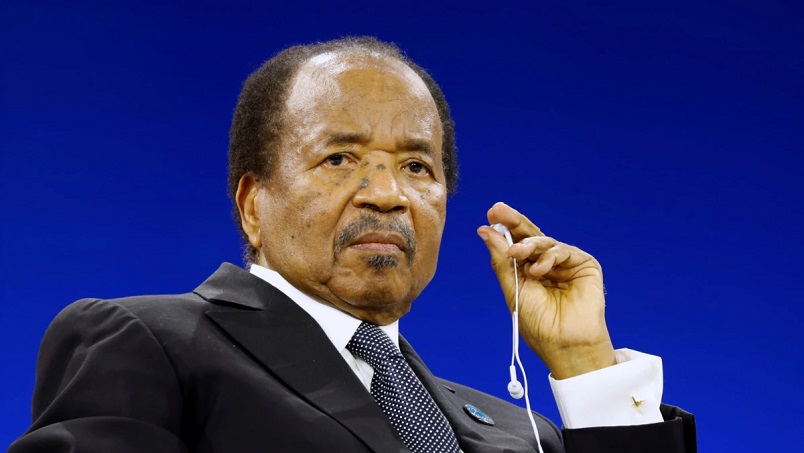 Paul Biya has been President of Cameroon since 1982. Biya was born on February 13, 1933, at Mvomeka’a, Meyomessala Subdivision, Dja-et-Lobo Division, South Region. He is the son of Etienne Mvondo Assam and Anastasie Eyenga Elle.

Biya attended schools in Cameroon, graduating from the Lycee Leclerc in Yaoundé the most prestigious high school in the French colony. He had a classical education; studying Greek, Latin, and philosophy among other subjects under the auspices of French teachers. He then attended various schools in Paris earning several diplomas and a law degree at the University of Paris.

On January 1, 1960, Cameroon became an independent nation. Biya was a loyal follower of the first President, Ahmadu Alhidjo. He quickly moved up the ladder in the Cameroon National Union Party. He also advanced within government. During the 1960s and 1970s, Biya held several ministerial positions and eventually served as Director of the Cabinet and Minister of State. In 1979, he was appointed Prime Minister of Cameroon and, as such, successor to the presidency.

In early November 1982, President Alhidjo resigned citing health issues but he continued to head the only legal political party in the country. As directed in the constitution Biya became President of Cameroon on November 6, 1982. As head of the party, Alhidjo felt he would still have control over the country especially since Biya had been so loyal to him over the years.

In a series of skillful maneuvers, Biya gradually replaced the Alhidjo government’s ministers with people loyal to him. Alhidjo and some of his disgruntled followers attempted a coup in 1982 which failed, forcing the former president to flee to exile in France. Biya then became head of the only legal political party; changing its name to the Cameroon People’s Democratic Movement. In 1984 a second coup was attempted. The fighting lasted for three days with Biya and his followers victorious.

Biya was re-elected in 1988, 1992, 1997, 2004, 2011, and 2018. His current presidential mandate expires in 2025. Over the years his regime has become increasingly autocratic and repressive. His rule is authoritarian and dictatorial. Biya has amassed a considerable fortune while serving in government. His net worth is reported to be approximately $200 million and he owns several homes in Cameroon, France, and Switzerland. Under his rule corruption has flourished in Cameroon. In 1998 and 1999, Transparency International dubbed Cameroon the “world corruption champion #1”.

Cameroon is predominantly French-speaking. However, a portion of the country was once under British rule and continues to speak English. In 2017 a law was passed allowing only French to be spoken in the nation’s courts. This initially sparked peaceful protests in the Anglophone part of the country. Biya’s government responded with violence. Violence has increased between armed Anglophone militias and government troops in the past few years.

At 89 Paul Biya is the oldest head of state in Africa. He has been Cameroon’s President for the past 39 years.