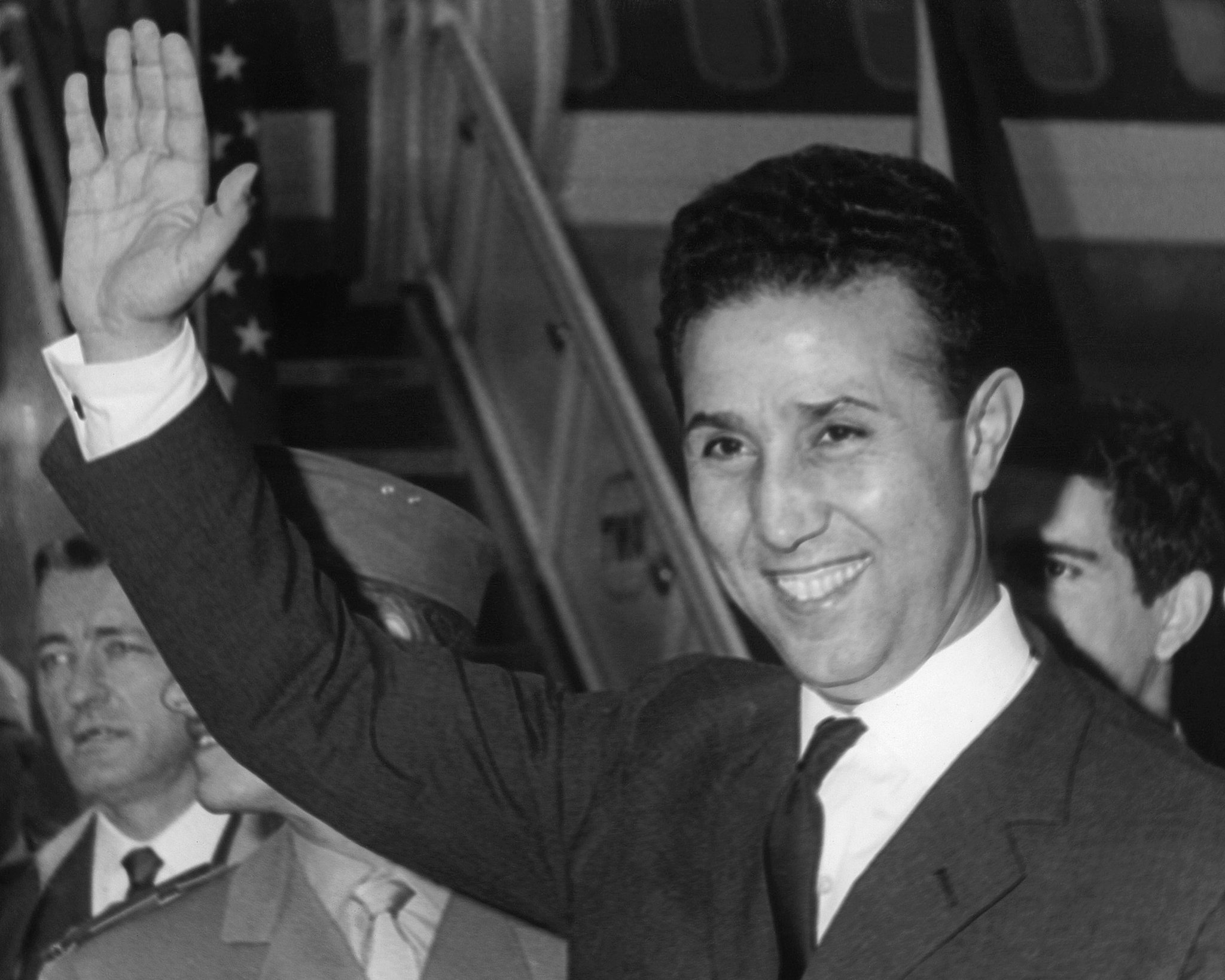 Ahmed Ben Bella was a leader of the Algerian War of Independence who became the first Prime Minister, and later, the first President of independent Algeria. Ben Bella was born in 1916 in Maghnia (Marnia), Oran, Algeria (then a French colony), the son of a farmer and small business owner. He was educated at local French schools and, later, at a school in Tlemeen where he first became acquainted with Algerian nationalists who advocated for an independent Algeria.

In 1937 Ben Bella joined the French army and fought in World War II where he was awarded the Croix de Guerre for his exceptional handling of an anti-aircraft post during the German invasion of France in 1940. In 1944 at in Monte Cassino, Italy, he dragged his wounded Commanding officer to safety in the face of enemy fire before taking command of his battalion. For this action on the battlefield, he was awarded the Médaille Militaire, the third highest award of the French republic.

After the war Ben Bella returned to Algeria and became active in anti-colonial politics. As a consequence, the French government confiscated his family farm. He then became one of the founders of the paramilitary Organistation Speciale, an underground nationalist organization. In 1950 he robbed a Post Office to get funds for the organization and was arrested and imprisoned for two years before escaping to Egypt.

In 1954 emigre leaders of the Algerian liberation movement met and formed the National Liberation Front (FLN) and agreed to mount an armed insurrection against the French colonialists. The fighting started later in 1954 between Algerian rebels and French forces. On October 22, 1956 when Ben Bella and 4 other FLN leaders were on a regular Air Atlas-Air Maroc flight from Morocco to Tunisia, a French air force plane forced their commercial flight to divert to Algiers. Ben Bella was arrested and taken to Paris and jailed. He was imprisoned in France from 1956 to 1962.

The Algerian War of Independence continued until 1962 with between 250,000 and 300,000 Algerian deaths. One million French settlers fled and over 2,000,000 Algerians were either resettled or displaced from their homes. In 1962 the French agreed to allow a referendum on Algerian independence. Voters were asked whether Algeria should become an independent state; 99.72% voted in favor with a voter turnout of 91.88%. On July 5, 1963, 132 years after the French arrival in Algiers, Algeria declared independence. Ben Bella was the first Prime Minister of the newly independent country, serving from 1962 to 1963, then he was elected to the Presidency unopposed, and served from 1963 to 1965.

Although the FLN was the only political party in the country in the 1960s it was divided between a leftist faction led by Ben Bella and a more moderate faction headed by Houari Boumedienne the vice-president and head of the army. On July 15, 1965, Army leaders arrested Ben Bella and Boumedienne was installed as president.

Although he was never put on trial, Ben Bella spent the next 14 years in prison. In 1979 he was moved from prison to house arrest and on Oct. 30, 1980 he was finally freed. He left Algeria and spent the next ten years in exile mainly in Switzerland. In 1990 Ben Bella returned to Algeria. He died in Algiers on April 11, 2012 at the age of 93.