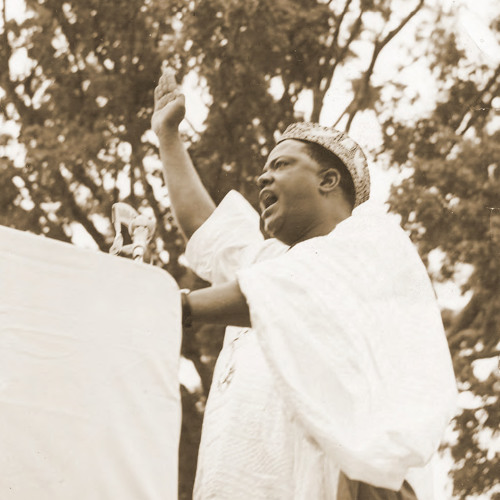 Hubert Maga was the first president of Dahomey (Benin). He was born on August 10, 1916 in Parakou a city in northern Dahomey then a French colony and attended local primary schools in Parakou. He later attended the prestigious school Normale William Ponty in Dakar, Senegal.

After finishing his education, Maga returned to Dahomey where he taught at a secondary school in Natitingou, Dahomey. In 1945 he became headmaster of the school. Maga, one of the few western educated northerners in the colony, became involved in local politics and in 1947 he was elected to the local assembly in Dahomey. In 1951 he was elected to the French National Assembly as a representative from French West Africa. He served in the national assembly for much of the 1950s. In 1957 Maga served in the French national government as the Secretary of State for Labor. He was very proud of this achievement. In the late 1950s Dahomey was preparing for independence.

In 1959 Maga was elected head of the transitional government and when the Republic of Dahomey became independent on August 1, 1960 Maga became president. In 1962 Maga declared Dahomey would be a one-party state. He enjoyed foreign travel and built a $3 million presidential palace in the capital city, Cotonou. While the government spent lavishly the economy collapsed. Foreign investment dried up. Maga conscripted young people to harvest agricultural produce which alienated and angered many youths. In 1963 the Dahomian army placed Maga under house arrest and charged him with corruption and embezzlement of public funds. He was never prosecuted and after his released in 1965, Maga left Dahomey and lived for a short time in Togo and then in Paris, France.

By 1970 Maga had returned to Dahomey and ran for the Presidency. The results were contested between Maga and two other candidates, Justin Ahomadegbe-Tometin and Sourou Migan Apithy. After negotiations it was decided to establish a rotating presidency between the men. This arrangement proved cumbersome and unproductive and in October, 1972 the army took action. A coup led by Major Matthieu Kerekou resulted in Maga and other politicians being arrested. Maga was imprisoned until 1983. After his release he lived in France and Benin (the name adopted by Dahomey in 1975). Later in life he sat as a judge on Benin’s Constitutional Court and as an Advisor to the President.

Hubert Maga died in Cotonou, Benin on May 8, 2002 at the age of 83. Little is known about his personal life.