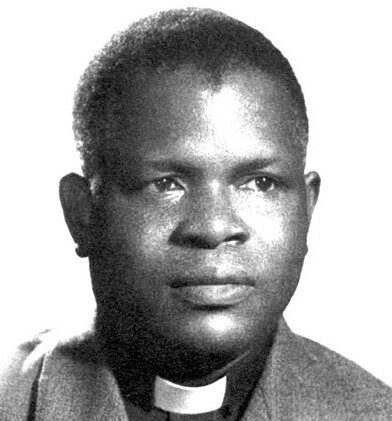 Fulbert Youlou was the first President of the Republic of Congo, also known as Congo Brazzaville. Youlou was born on July 9, 1917, at Mandibu, a town near Brazzaville, capital of the French Congo which was part of French Equatorial Africa. As a young boy, he studied at a school in Brazzaville and then was sent to Yaoundé, Cameroon to complete his secondary schooling. After completing secondary school, he attended the Grande Seminaire in Yaoundé. He then returned to Congo where he taught school in Brazzaville. He then went to Libreville, Gabon to study for the Catholic priesthood. He was ordained as a priest on his 32nd birthday in 1949 and was assigned to a parish in Brazzaville.

As a priest, Youlou was involved in church, youth, prison, and hospital administration. He also became involved in nationalist politics directed against the French colonial administration. In 1955 he decided to enter politics. Shortly after this, he was suspended from the priesthood because of his involvement in political causes. Although no longer a practicing priest, Youlou continued to wear a priest’s cassock during his political career. In 1956 he helped organize a political party that won victories in the 1957 municipal elections and shortly after became the mayor of Brazzaville, the largest city in the French colony.

In preparation for eventual independence, the French held national elections and oversaw the creation of the Congolese administration of the colony. In November 1958 Youlou became Prime Minister of the French Congo. His government negotiated with France for Congolese independence. On August 15, 1960, Congo became independent with Youlou as its first head of state.

By 1961 Youlou had moved Congo to a presidential system of government. In March he was elected President with no opposition. In August 1962 Youlou announced that the country would become a one-party state. Once he had consolidated power, he began eliminating his opponents. He was an advocate of private ownership of property and the maintenance of close ties with France.

Youlou also created an aura of mysticism about his person as some supporters considered him semi-divine. Stories circulated of his mysterious powers. It was said he bathed in a river pool where the body of a famous Kongolese king executed by the French had been discarded. He would bathe fully clothed (in his cassock), praying to the ancestors, and emerge completely dry.

Regardless of his semi-divine powers, by 1963 many Congolese were dissatisfied with his rule. Labor unions faced government repression. Youlou was accused of nepotism, favoritism, and government incompetence. Government corruption was widespread.

Riots against the government broke out in Brazzaville on August 13, 1963, and continued for three days. When Youlou’s government was unable to control the situation, he appealed to France for troops but none were forthcoming. Youlou then announced his resignation. The President of the National Assembly, Alfred Raoul, was installed as the new president and was able to get the situation under control. The three days of revolt are known as the “Three Glorious Days” in Congolese history. This is also the title of the Congolese national anthem. Youlou was arrested and imprisoned. In February 1965 he escaped, crossing the Congo River to Kinshasa in the Democratic Republic of Congo.

By 1966 Youlou and members of his family settled in Madrid, Spain. Youlou was a polygamist having a least four official wives. He died in Madrid on May 5, 1972, at the age of 54.