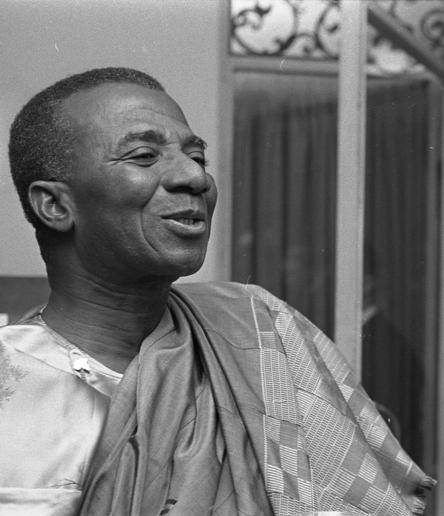 Sylvanus Olympio was the first president of Togo and also served as prime minister. He was born on September 6, 1902, in Lome, Togoland, then a German colony. Olympio’s grandfather had emigrated from Brazil in the mid-19th century. Young Sylvanus was one of 30 children. His father, Epiphanio, ran a prominent trading house in Togoland. The Olympios belonged to an aristocratic community of mixed Brazilian, Yoruba, and African descent.

Sylvanus Olympio received his early education in Togoland. With the German defeat in World War I, France administered Togo as a trusteeship. Olympio was allowed to study at the London School of Economics where he earned a degree in commerce. He also became fluent in several languages: German, English, French, Portuguese, and Yoruba before returning to Togo where he was employed with the United Africa Company.

Soon afterward Olympio entered politics. In 1946, he was elected to the territorial assembly in Togo as the leader of the political party, Comite de l’Unite (Party of Togolese Unity) the main anti-colonial movement.

The United Nations encouraged France to prepare Togo for eventual independence. In 1958 elections were held and Olympio’s party won. He was asked to form a government that would work toward independence. On April 27, 1960, Togo became independent with Olympio as head of state.

A new constitution was adopted the following year which gave the president extensive powers. Togo soon became a one-party state although not without opposition. Many of the western-educated Togolese resented Olympio’s authoritarian moves. People in the north complained about being underrepresented in a government dominated by southerners. Many of the younger Togolese felt that Olympio’s government was overly influenced by the French.

These problems were compounded by the return of Togolese soldiers who had fought for the French in Indochina and Algeria. The Togolese army only numbered a few hundred and the returning veterans who had fought under French command felt they should be integrated into the regular Togolese army. Olympio opposed this integration because he felt this would incur an unnecessary expenditure by his cash-strapped government.

Olympio’s home was adjacent to the United States embassy. On the night of June 12, 1963, six men surrounded the presidential palace which only had two guards. Olympio heard a commotion at the front door and made his escape, climbing over the garden wall and into the embassy yard. He found an unlocked, parked car and hid in it. That morning U.S. Ambassador Leon B. Poullada went to the embassy and discovered a group of men at the gates. Since the embassy had no guards or marines, just one night watchman, he feared it would be ransacked if he entered, so he returned to his home.

Around 7:00 a.m. an unarmed man in shorts on the Embassy grounds was surrounded by unidentified assassins who had entered the embassy grounds to kill Olympio. The unarmed man was shot and killed. It was later determined that he was former President Olympio who was 60 at the time of his death. With his murder, Olympio became the first head of state to be assassinated during a military coup in post-colonial Africa.

Sylvanus Olympio was married to Dina Grunitsky. They had several children including a son, Gilchrist, who became involved in Togolese politics several years after his father’s assassination.