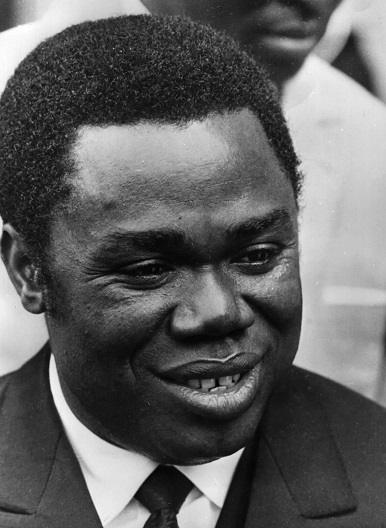 David Dacko was the first President of the Central African Republic. Dacko was born on March 24, 1930, at Bouchia, Moyen Congo, then part of French Equatorial Africa. He attended primary school in Mbaiki and Bambare and secondary school at the Ecole Normale of Mouyoundzi. He was trained and taught at a school in Bangui, the capital and largest city of Ubangi-Shari. Later he became the director of Kovanga College.

In the 1950s, Dacko became involved in nationalist politics. In 1957, he was elected to the Regional Assembly for Ubangi-Shari. A transitional government was formed to prepare Ubangi-Shari for independence. Dacko served as Minister of Agriculture and, later, as Minister of Interior and Administrative Affairs in this government. In 1958, Dacko became a deputy in the Legislative Constitutional Assembly which was charged with writing a constitution for the colony and one year later, in 1959, Dacko became leader of the transitional government. On August 13, 1960, Ubangi-Shari became independent as the Central African Republic with Dacko as head of state.

Once in power, Dacko moved against any opposition. He established a presidential form of government with a powerful centralized executive and turned the newly independent Central African Republic into a one-party state. He was re-elected president in 1964 with no opposition. Dacko was able to increase diamond production, a major source of revenue for the country, by doing away with the monopoly one company held over the diamond industry.

Dacko’s opponents, however, accused him of nepotism, corruption, and government inefficiency. He expanded the civil service unnecessarily. Even with increased revenue from diamond production, the government was facing bankruptcy due to Dacko’s policies.

On December 31, 1965, the army commander Jean-Bedel Bokassa led a coup. Even though Dacko was his cousin, Bokassa had him imprisoned. Bokassa became head of state, later crowning himself emperor and renaming the country the Central African Empire. In July 1969, Dacko was released from prison and by 1976 he was working as Bokassa’s personal advisor.

Bokassa proved to be a very erratic, flamboyant, and unstable leader. Many opponents were arrested, imprisoned, and executed. The economy suffered and by mid-1979 the government was unable to pay civil servants.

A small group of military officers in conjunction with French security officers organized “Operation Barracuda.” On September 21, 1979, Bokassa was overthrown, and reinstalled Dacko as head of state. Dacko was subsequently elected President of the country now renamed the Central African Republic in a free multi-candidate election. His term began on April 1, 1981.

Dacko’s government soon encountered financial problems and often did not pay civil servants and teachers on time. Strikes and protests against the government intensified and on September 21, 1981, General Andre Kolingba led a bloodless coup against the government. Dacko was unharmed and later allowed to engage in national politics. In 1992 and in 1999 he unsuccessfully ran for President. David Dacko died on November 30, 2003, in Yaoundé, Cameron while in route to France for medical treatment. He was 73 years of age.

David Dacko and his wife, Brigitte, had seven sons and four daughters. One son, Bruno Dacko, served as Minister of Tourism recently in the Central African government. Another son, Ruffin Molomadon, recently served as Vice-President of the National Assembly.