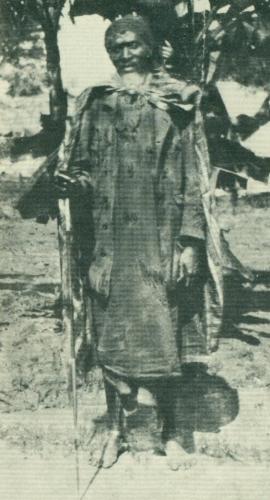 Mytela Kasanda, or Mirambo, was a Nyamwezi warlord who gained control of much of east central Africa. He was born into the royal family of the small chiefdom of Uyowa, and likely became chief after the death of his father around 1860. He became a powerful trader throughout the Great Lakes region, in what is now Tanzania. Through trade with Europeans, Mirambo gained access to guns that were critical in establishing his military supremacy in the region.  With the aid of an army comprised mostly of teenage boys, Mirambo gained control of the kingdom of Urambo, gaining tribute from noble families.   By unifying several Nyamwezi tribes, Mirambo gained control over major Swahili-Arab trade routes, establishing the Nyamwezi kingdom as a major regional economic and military player.

Trading primarily in ivory and slaves, Mirambo emerged as the dominant regional power around 1870. By 1875 he signed a treaty with the Sultan of Zanzibar, furthering Nyamwezi political stability. Mirambo continued to expand the kingdom of Urambo between 1876 and 1880, eventually controlling trade routes north to Buganda (in Uganda) and as far west as Lake Tanganyika.

As European involvement in the East-African political sphere expanded, Mirambo came into conflict with the Arab allies of Sir Henry Morton Stanley over trade routes. Impressed by the military success of his enemy, Stanley called Mirambo “the African Bonaparte.” Mirambo shared much of the east central African territory with Kabaka Mutesa, ruler of the Buganda kingdom.  The two trader-kings maintained an uneasy peace while vying for control of the region.

Despite his military prowess and the substantial kingdom he established, an expanded Urambo collapsed a few years after Mirambo’s death in 1884.