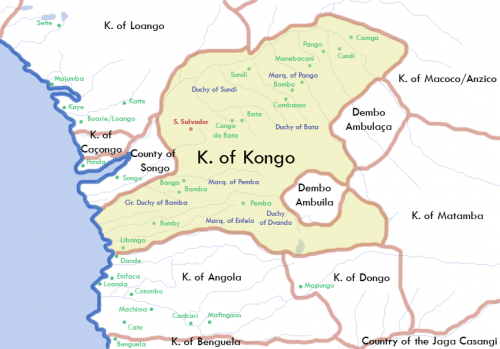 Born Nzinga Mbemba, King Alfonso I was the leader of the Kongolese people in the early part of the 16th Century.  Mbemba developed a strong trade relationship with the Portuguese and adopted Catholicism as a result of this relationship. The influence of the Catholic faith reached every aspect of the King’s life, from his name which was changed to Alfonso upon his acceptance of Catholicism, to his understanding of governmental organization. Demonstrating his dedication to his religion, Alfonso named Catholicism the state religion and built many Catholic churches throughout his kingdom. In his establishing the state religion, Alfonso called for the burning of any non-Christian idols or objects related to magic and sorcery, erasing significant aspects of the Congolese cultural heritage.

The relationship between the Portuguese and the Kongo (which is now part of the modern state of the Congo formerly known as Zaire) was based in trade. Alfonso adopted the Portuguese court system, and aspired to educate his elite in order to compete in international trade. The King controlled every aspect of the economic system of the Kongo, trading ivory and raffia fabric in exchange for currency he used to bring Portuguese priests, skilled tradesmen, and teachers to the Kongo to promote the education of the local elite and development of the country. The trading atmosphere was initially peaceful between the Kongo and the Portuguese nations, with letters constantly being exchanged between Alfonso and his European counterpart, Portuguese King Manuel.

This atmosphere changed when the Portuguese demanded slaves in return for their trade goods.