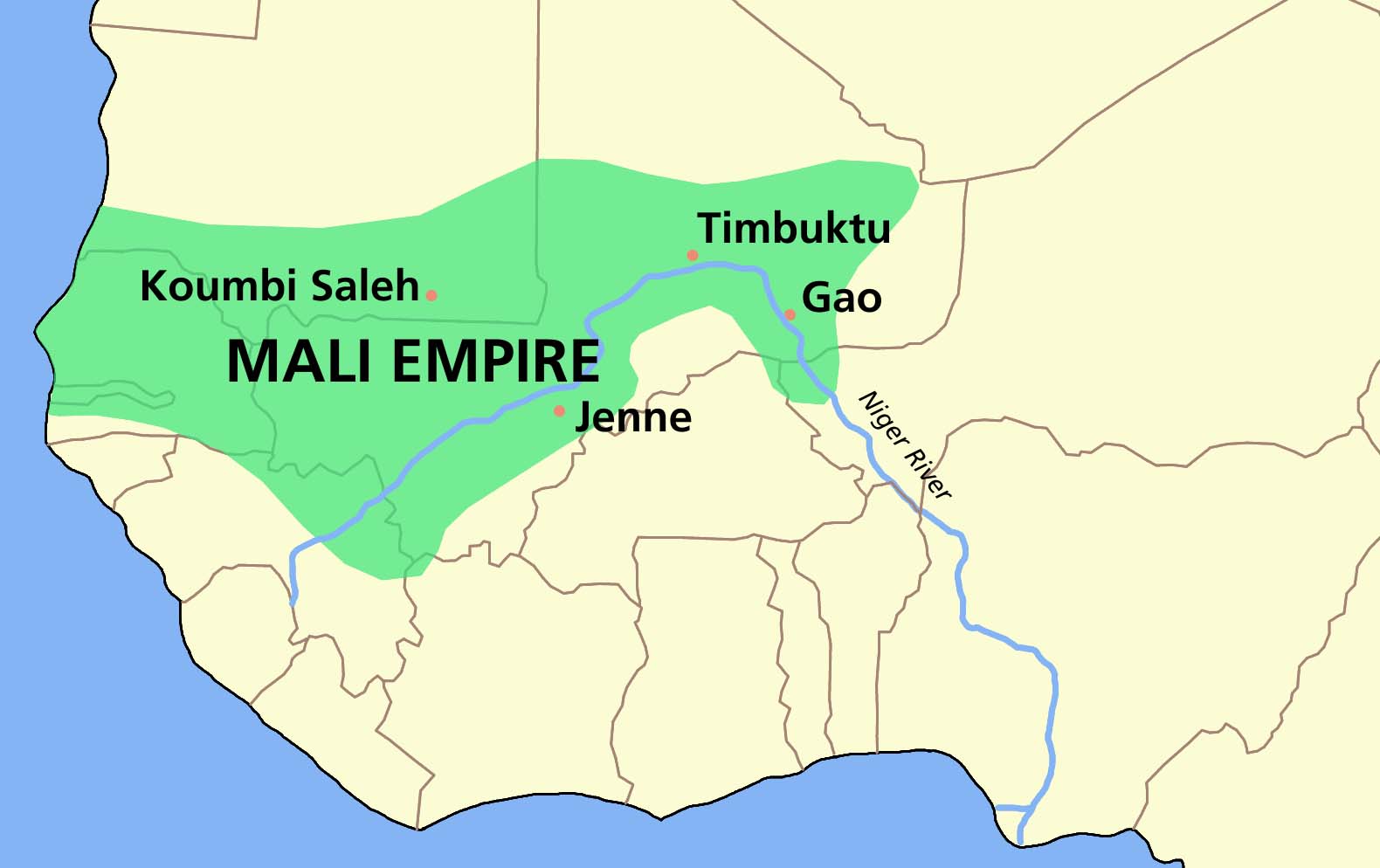 The Mali Empire was the second of three West African empires to emerge in the vast savanna grasslands located between the Sahara Desert to the north and the coastal rain forest in the south. Beginning as a series of small successor trading states, Ancient Ghana, the empire grew to encompass the territory between the Atlantic Ocean and Lake Chad, a distance of nearly 1,800 miles. Encompassing all or part of the modern nations of Mauritania, Senegal, Gambia, Guinea, Mali, Burkina Faso, Niger, Nigeria, and Chad, at its height in 1300, Mali was one of the largest empires in the world.

The Mali Empire was strategically located between the West African gold mines and the agriculturally rich Niger River floodplain. Mali’s rise begins when the political leaders of Ghana could not reestablish that empire’s former glory following its conquest and occupation by the Almoravids in 1076. Consequently a number of small states vied to control the salt and gold trade that accounted for Ghana’s wealth and power.

In 1235 Sundiata Keita, the leader of one of these states, Kangaba, defeated its principal rival, the neighboring kingdom of Susu, and began consolidating power in the region. Sundiata’s conquest in 1235 is considered the founding of the Malian Empire. Under Sundiata’s successors Mali extended its control west to the Atlantic, south into the rain forest region, including the Wangara gold fields, and east beyond the great bend of the Niger River.

At its height in 1350 the Mali Empire was a confederation of three states, Mali, Memo and Wagadou and twelve garrisoned provinces. The emperor or mansa ruled over 400 cities, towns and villages of various ethnicities and controlled a population of approximately 20 million people from the capitol at Niani. The Malian Army numbered 100,000 men including 10,000 cavalry. During this time only the Mongol Empire (China) and the Russian Empire exceed Mali in size. The mansa reserved the exclusive right to dispense justice and to tax both local and international trade. That trade was centered in three major cities, Timbuktu, Djenne and Gao.

Between 1324 and 1325 Mansa Musa, the most famous of the Malian Emperors, made an elaborate pilgrimage through the current nation of Sudan and through Egypt on to Mecca in Arabia, bringing thousands of followers and hundreds of camels carrying gold. Through the highly publicized pilgrimage and indirectly through an elaborate trade that sent gold to the capitals of Europe and Asia, Mali and its ruler became famous throughout the known world.

Mali’s power however was eventually weakened by palace intrigue that prevented an orderly succession of imperial power and by the desire of smaller states to break free of its rule to reap the benefits of the salt and gold trade. The first people to achieve independence from Mali were the Wolof who resided in what is now Senegal. They established the Jolof Empire around 1350. In 1430 the nomadic Tuareg seized Timbuktu; This conquest had enormous commercial and psychological consequences: a relatively small but united group had occupied the richest city in the Empire and one of the major sources of imperial wealth.

The greatest challenge, however, came from a rebellion in Gao that led to rise of Songhai. The once vassal state to Mali conquered Mema, one of the Empire’s oldest possessions in 1465. Three years later they took Timbuktu from the Tuareg.

Beginning in 1502, Songhai forces under Askia Muhammad took control of virtually all of Mali’s eastern possession including the sites for commercial exchange as well as the gold and copper mines at the southern and northern borders. Even the desperate effort by Mansa Mahmud III to craft an alliance with the Portuguese failed to stop Songhai’s advances. In 1545 a Songhai army routed the Malians and their emperor from their capital, Niani. Although Songhai never conquered what remained of the Empire of Mali, its victories effectively ended Malian power in the savanna.