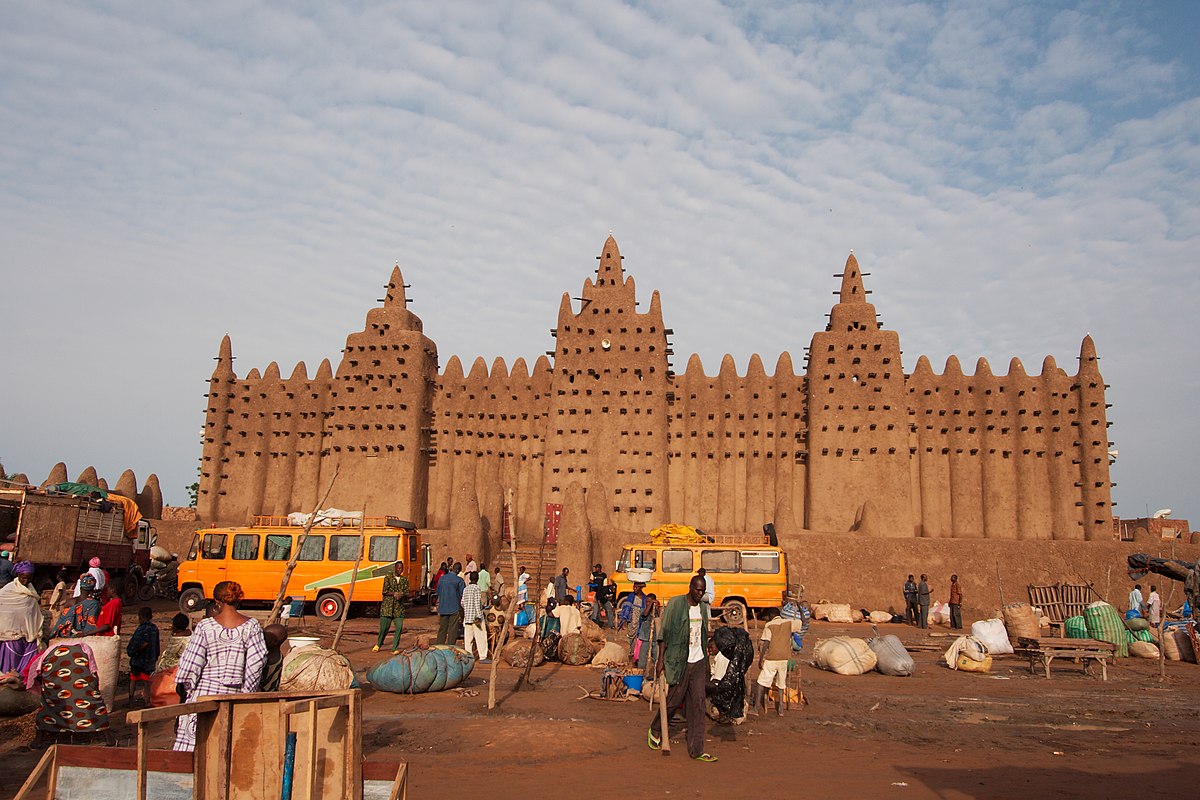 Djenné, also known as Jenne or Dienné, is a southern Malian city that was an ancient center for trading and Muslim scholarship during its height. It is nestled on the Bani River and is approximately 220 miles southwest of Timbuktu. The city had a population of 26,267 people in 2009. During the flooding season, the city becomes an island due to it being situated on small hill near the river.

The city of Djenné was originally founded by the Bozo people around 250 B.C.E at a location known as Djenné-Jeno which was one of sub-Saharan Africa’s oldest known cities and is about 1 mile away from the city’s current site. The conversion of the city to Islam in either the 11th or 13th century caused Djenné to relocate to where it now currently resides. This new location resulted in Djenné becoming a major trading hub for commodities such as gold, salt, and salves along the trans-Saharan trade route.

Djenné was never a part of the Mali Empire despite its location but instead existed as a separate city-state that was protected by its geography and walls. The city was first conquered by Sonni Ali of the Songhai Empire in 1473. Morocco ended the empire’s reign in the region in 1591 and took over Djenné. Under Morocco the city became a flourishing center for trade and Muslim learning during much of the 1600s.

By 1670 Djenné was incorporated into the Segou Kingdom and remained under its governance until the Fulani ruler Shehu Amadou Lobbo conquered the city in 1818 for the Massina Kingdom. The Toucouleur Empire led by Umar Tall would come to control the city in 1861 and remained in power until the French conquered Djenné in 1893. Under French rule the city’s importance as a trading center declined.

Today, Djenné’s economy is mostly centered around agriculture. The city is home to a number of archaeological sites and many examples of Muslim architecture. The Great Mosque of Djenné, the largest mud-brick building in the world, was originally constructed in the 13th century but was rebuilt in 1907 after it was destroyed in 1834 by intentional flooding. The original mosque was one of the most influential Islamic learning centers in Africa during the Middle Ages. The current Great Mosque along with the city’s old section were designated as United Nations Educational, Scientific and Cultural Organization World Heritage Sites in 1988. Each year a festival is held with the primary focus of maintaining the mosque and all the city’s inhabitants take part.