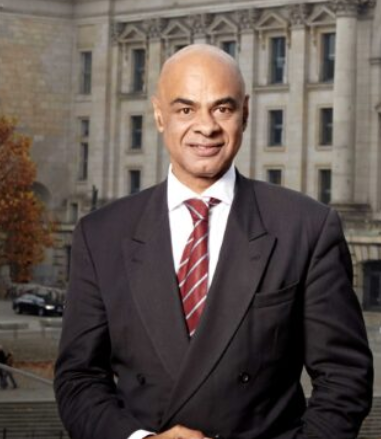 Prominent Afro-German politician, actor, and author Charles M. Huber was born Karl-Heinz Huber in Munich, Germany, on December 3, 1956, the illegitimate son of Senegalese diplomat Jean-Pierre Faye, a nephew of  Léopold S. Senghor, the first president of independent Senegal, and German domestic worker Olga Huber. He was raised by his maternal grandmother and did not meet his father until  age 28. Decades later he revealed the challenges he faced growing up biracial in Lower Bavaria.

After finishing high school Huber trained to work as a dental technician but turned to acting using the stage name Charles Muhamad, reflecting his nickname (Charly) and his admiration for the boxer Muhammad Ali.  Huber eventually gained considerable notoriety for his role as Criminal Commissioner Henry Johnson in the German television series Old One(Alte), a popular crime drama that was broadcast in numerous European countries from 1986 to 1997. He also had roles in the German motion pictures Kolp (1985), Erkan & Stefan(2000); and the American productions Enemy Mine (1985) starring Dennis Quaid and Louis Gossett, Jr., and Skyscraper (1996) starring Anna Nicole Smith. While in the United States, Huber graduated from the New York Film Academy. His graduation film The Arrival was shown at the 1999 International Hofer Filmtage. His stage credits include Driving Miss  and the lead role in the musical Mandela, both German productions.

Exploring other career opportunities, in 2007 Huber founded an agency to advise and promote soccer players of color. He also acquired experience with national and international aid and marketing organizations, particularly those serving Germany and Senegal. A Roman Catholic who identified with three major German political parties, he delved more deeply into politics and government when he worked as the internet campaign designer for Prime Minister Angela Merkel in the 2009 federal election campaign. In 2013, representing the constituencies of Darmstadt and Darmstadt-Dieburg as a member of the conservative Christian Democratic Union (Christlich Demokratische Union, or CDU), he successfully campaigned for a seat in the German Parliament (Bundestag), defeating the country’s former justice minister 65,812 to 63,400 votes.

Fluent in German, English, French, Italian, and Wolof (a language of Senegal), during Huber’s four years in office, 2013 to 2017, he chaired or was a member of parliamentary groups that focused on African and Central American nations. He also was a member of the Parliamentary Assembly of NATO, the Committee for Economic Cooperation and Development, Foreign Affairs Committee, Parliamentary Advisory Council of the World Population Foundation, Economic and Energy Committee, Advisory Committee of the Institute for Cultural Diplomacy, and the Subcommittee on Civilian Crisis Prevention. In 2016, Huber accompanied civil rights activist and German Federal President Joachim Gauck on his trip to Mali and Nigeria.  He also wrote articles in the German version of the Huffington Post; was a guest speaker at Harvard University addressing the topic of immigration policy and migrants in Germany and Europe; and was a spokesman for the CDU-related Konrad Adenauer Foundation activities in Africa and other foreign regions.

Huber, divorced from Shobha Zandie Huber, is father of four children. In 2005 he published his autobiography, A Lower Bavarian in Senegal: My Life Between Two Worlds (translated title).