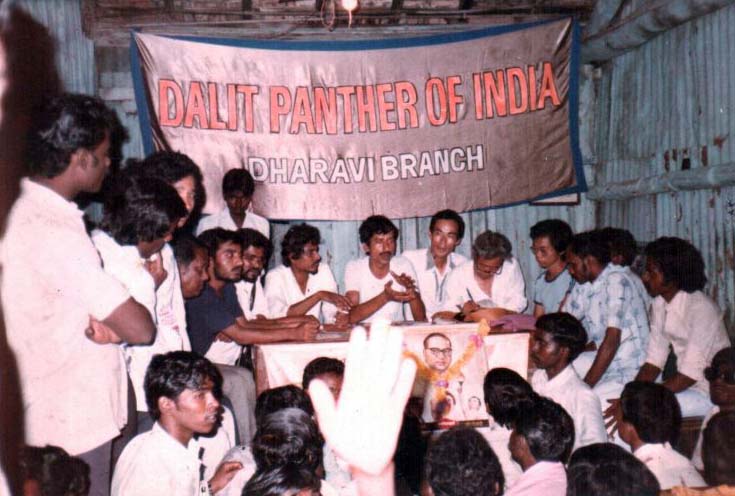 Educated youth from the slums of Mumbai, India started the Dalit Panther Movement (DPM) in June 1972, inspired by Dr. Bhimrao Ambedkar and the U.S. Black Panthers.  Dalits (“downtrodden”) are the lowest “untouchable” caste in Hinduism.  Hinduism views Dalits as sinners in their prior lives who can only redeem themselves by being good servants of the high castes.

In the 1920s Ambedkar, a Dalit who was a primary author of the Indian Constitution, tried to end Dalit oppression by giving them political power.  In writing the draft of the Indian Constitution in 1933, Ambedkar reserved a portion of all elected positions for Dalits and only Dalits could vote for these positions.  Mohandas (Mahatma) Gandhi, a high-caste Hindu, opposed political power as a solution to Dalit oppression.  He protested Ambekdar’s work by going on a hunger strike which precipitated the slaughter of thousands of Dalits.  Afraid of more deaths, Ambedkar backed down and eliminated this provision of the Constitution.  Because of continued Hindu oppression of Dalits, Ambedkar converted to Buddhism in 1956.  His conversion led to mass conversions of other Dalits to Buddhism.

Given their lack of political power, most Dalits continue to have very menial or degrading jobs such as removing human waste, dead animals, or sweeping streets.  Dalits comprise 18% of the Indian population, and they face ongoing segregation in schools and restaurants, police violence, sexual violence, and even lack access to drinking water.

DPM selected the name “Dalit Panthers,” after reading about the U.S. Black Panthers in Time magazine.  The DPM combined the work of Ambedkar with the militancy and self-defense of the Black Panthers to combat atrocities against Dalits.  DPM co-founders Namedo Dhasal, Raja Dhale, J. V. Pawar, and Arun Kamble were poets and writers.  Their anti-establishment poetry and short stories published in Dhasal’s magazine Vidroh (“Revolt”) were powerful realistic descriptions of the oppression of Dalits and their revolutionary struggles for change.  DPM also used self-defense in response to atrocities against Dalits, held election boycotts, demonstrated against the ruling Congress Party, and attacked Hindu deities to protest Dalit caste oppression.

In 1973 the DPM published their manifesto integrating Marxist capitalist exploitation with Buddhism, identifying Dalit enemies as landlords, capitalists, money-lenders and the government controlled by ruling castes.  They also expanded the term Dalits to include other oppressed peoples such as low (Scheduled) castes, neo-Buddhists, landless and poor peasants, and exploited women.  The notoriety of the DPM’s poems, short stories, and street protests led to the rapid growth of over 30 loosely organized groups of the DPM in Mumbai.

In 1974 the DPM leaders Dhasal and Dhale disagreed about having a Marxism-Buddhism ideology versus a strictly Buddhist identity.  Outside pressures on DPM included intense police surveillance and Indira Gandhi’s State of Emergency from 1975- 1977.  On March 7, 1977 Dhasal and Pawar announced the dissolution of the DPM as a result of this infighting and political repression.

DPM’s legacy is seen in Dalit literature and politics.  The writings of  PM poets and writers helped establish Dalit literature as a major literary form, and Dhasal became one of India’s leading poets.  The DPM has also had a lasting impact on Indian politics.  Shortly after the dissolution of the DPM, Kamble and other DPM leaders formed the Bharatiya Dalit Panthers (BDP) when Emergency Rule ended in March 21, 1977.  The BDP expanded across India to nearly 20 states, and was most active near the India-Nepal border and in Tamil Nadu in southern India.  In Tamil the party is known as the DPI.  It is now the major Dalit political party in Tamil fighting against Dalit oppression.