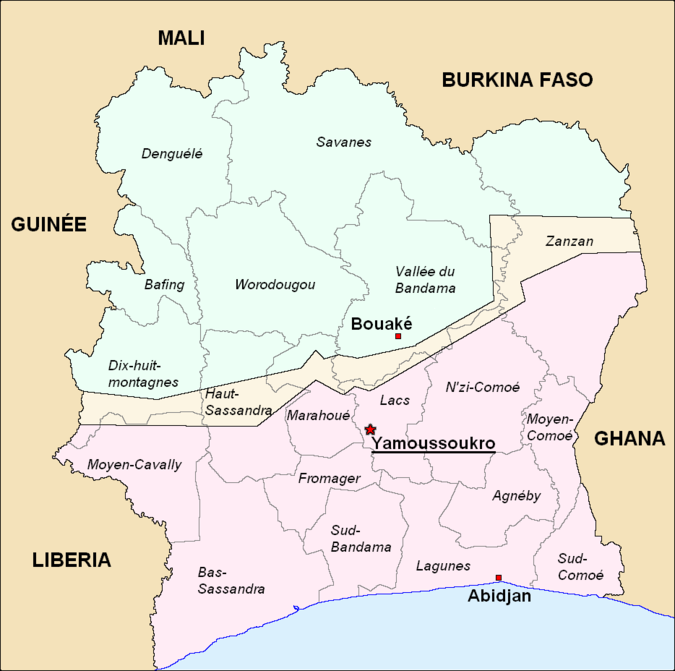 First Ivorian Civil War was a five-year conflict that occurred in the west African country of the Ivory Coast (also known as Cote d’Ivoire) between 2002 and 2007. The main belligerents of the conflict were the central government of the Ivory Coast, led by President Laurent Gbagbo and supported by France and the United States. Gbagbo also recruited the Young Patriots  of Abidjan militia, Liberian mercenaries and pilots from Belarus. The insurgents, led by Guillaume Soro and called the Forces Nouvelles de Cote d’Ivoire (the New Forces) were supported by Russia, Bulgaria, and Burkina Faso.  More than three thousand soldiers, militia members, and civilians were killed in the conflict.  In 2004 United Nations peacekeepers, mainly soldiers of the Economic Community of West African States (ECOWAS) entered the Ivory Coast but were unsuccessful in stopping the fighting.

The background of the conflict reflected the religious divisions in the Ivory Coast between the Muslim north and Christian south.  The first president of the country, Felix Houphouet-Boigny, who ruled from 1960 to 1993, was able to maintain the peace between the regions.  His successors were not as successful and by the year 2000, there were open tensions between north and south. The influx of large numbers of immigrants from neighboring Burkina Faso also exacerbated tensions as native Ivorians debated whether the newcomers should have voting rights.

The civil war began on September 19, 2002 when northern troops launched attacks across the nation against the central government. Eventually, rebel forces attacked Abidjan, the nation’s largest city.  Despite the attack on Abidjan, government forces remained in control of the city and of Yamoussoukro, the capital, and most of the south of the country while rebel forces took over the north and the central Ivorian city of Bouake. Attempts to broker a cease-fire were unsuccessful and fighting continued into the winter and escalated sharply on November 28, 2002 when two rebel groups, the Popular Movement of the Ivory Coast of the Great West (MPIGO) and the Movement for Justice and Peace (MJP) took control of the towns of Man and Danane.  French soldiers, openly supporting the central government, recaptured the towns two days later.

Fighting continued into 2004 despite ongoing peace negotiations in the French town of Linas-Marcoussis. In one incident on November 4, 2004, Ivorian president Laurent Gbagbo called for air strikes against the rebels. Two days later, an Ivorian Sukhoi Su-25 warplane mistakenly bombed a French military base near Bouake, killing nine French soldiers and an American aid worker. After the attack the French government began to withdraw its support for the Ivorian central government and in retaliation for the attack, destroyed most of the remaining planes in the Ivorian Air Force.

The war finally ended on March 4, 2007, which a peace agreement was signed between the government and the rebel forces in Ouagadougou, Burkina Faso. The Ivory Coast national football team was credited helping to secure this agreement when after qualifying for the 2006 World Cup, they called on all sides to negotiate a settlement.  The Ivory Coast would remain at peace for four years until a new conflict arouse in 2011, the Second Ivorian Civil War.