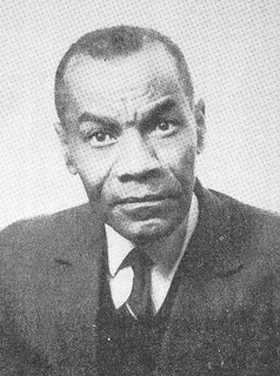 Poet, editor, diplomat, and cultural theorist Léon Damas was born on March 28, 1912, in Cayenne, French Guiana. He was the youngest of five children born to parents Ernest and Marie Aline Damas. After his mother’s death in 1913, young Léon and his siblings were placed in the care of his father’s sister, Gabrielle Damas.

In 1924, Damas left French Guiana to attend the prestigious Lycée Victor-Schœlcher, in Martinique. Among his new classmates was lifelong friend and collaborator Aimé Césaire. In 1929, Damas traveled to France to attend the University of Paris. Though his scholarship was for the study of law, Damas quickly developed an interest in the humanities and social sciences. Influenced by surrealist Andre Breton’s anti-colonial pamphlet Légitime Défense, by his encounters with the work of Harlem Renaissance poets like Claude McKay and Langston Hughes, and by the growing community of U.S. black expatriate writers and artists in his adopted city, Damas began to assert his identity as a poète Nègre.

In 1931, Damas and Aimé Césaire (also a student in Paris) met Léopold Sédar Senghor, a student from the French colony of Senegal who shared their interest in anti-colonial literature and thought. In 1934, the three founded the journal L’Étudiant Noir, a platform for a pan-Africanist literary and cultural movement that Damas, Aimé Césaire, and Senghor would come to call Négritude. This diasporically-oriented, anti-colonialist literary and ideological movement would attract Francophone writers of African descent.

Damas was also the first black writer to address the impact of colonization on the psyche of the colonized. In his 1937 poetry collection, Pigments, Damas began to identify the traits that characterize the internalized racism and self-subjugation that can accompany African and Afro-disaporic colonization. He introduced this colonial and postcolonial condition more than 20 years before philosopher Frantz Fanon would label such traits “the colonized personality” (in The Wretched of the Earth). Within its first two years in print, Pigments was translated into several African languages and was widely distributed throughout the European colonies of Africa and the Caribbean. In 1939, the French government banned and burned numerous copies of the collection after denouncing it as a threat to the security of the state.

In addition to Pigments, Damas was the author of nine other volumes, including five additional books of poetry, three essay collections, and one book of short stories. In addition to a writing career that spanned 40 years, from 1937 to 1977, he held a number of prominent and influential positions in military, diplomatic, and government organizations. Damas served in the French army during World War II, after which he was elected to the Chambre des Députés of the French National Assembly, serving from 1948 to 1951. He would later become the overseas editor for Radio France, a contributing editor on the board of the journal Presence Africaine, and a representative of the African Society of Culture for the United Nations Educational, Scientific, and Cultural Organization (UNESCO).

Throughout this period, Damas traveled extensively in Africa, Latin America, the United States, and the Caribbean, delivering lectures and serving in academic and creative residencies, often in the U.S. In 1970, Damas settled in the District of Columbia, where he accepting a visiting professorship at Georgetown University. He was subsequently offered a permanent position at Howard University, where he remained on the faculty until his death, on January 22, 1978.