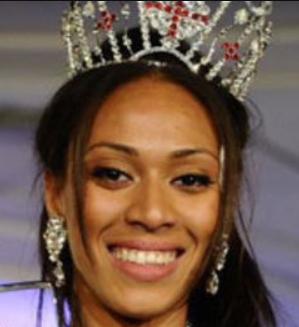 Rachel Sophia Adina Christie was crowned Miss England on July 20, 2009. She was the first women of African descent to hold the title.  Previously she was Miss London City 2009.  Christie’s reign as Miss England was brief; she was forced to relinquish her title in November 2009.

Rachel Christie is biracial. Her mother Diana Christie is a white Irish Catholic. Her father, Afro-Briton Russel Christie, the brother of former British Olympic sprint champion Linford Christie, was stabbed to death when young Rachel was eight.  She has three siblings, James, Rhease, and Rebecca.

Christie faced enormous adversity usually not associated with beauty pageant contestants. She was born in a West London housing project in 1988 to a troubled family in an environment rife with poverty, drugs, and prostitution. Her father was a frequently unemployed philanderer in constant trouble with the law.  In 1989 he was convicted of attacking a former lover with a baseball bat and was sentenced to three years in prison.  Five years later, in 1994, he was arrested again for committing the same crime with a different girlfriend as well as theft. After serving part of a three and half year term, he was murdered in a 1996 drug-related incident.

Christie credited her mother for attempting to provide what stability the family enjoyed in those years.  She also credits her grandfather, James Christie, a devoutly religious man of the Pentecostal faith who took Rachel and her siblings to church every Sunday for worship.

During her teenage years, Christie attended Maria Fidelis, an all-girl convent school located in North London. While the school was known for its stringent academics, it was also an environment where psychological harassment was commonplace as well. Christie was the victim of constant taunts for being rail thin and having a gawky teenage figure. Despite such ongoing verbal taunts from classmates, Christies determined that their actions would not break her spirit and confidence.

It was this determination that led to her entering the 2009 Miss London City pageant.  After winning that contest she entered and won the Miss England pageant later that year.  The 2009 pageant was marred by protestors who denounced all beauty pageants as sexist.  Yet they praised the selection of Christie as an indication that talent and hard work should take precedent over skin color.

During her brief reign, Christie promoted the message that personal initiative and responsibility were paramount to achieving success. She especially reminded black youth that success was possible with hard work and determination and that they should stop living up to negative stereotypes.  She made it clear that she had no patience for fellow blacks or other non-whites who used racism or their skin color as an excuse for their personal failures.

Her reign as Miss England came to an abrupt end in November 2009 when she arrested after getting in a brawl with a former fellow beauty pageant contestant, Miss Manchester, Sara Beverly Jones. Immediately following the incident, Christie announced her resignation stating that she wanted to concentrate on clearing her name. Eight months later in July 2010 she was arrested and convicted for drunk driving.  In 2012, Christie had a son, Logan Phoenix, with British television actor, model, and fitness guru David McIntosh.