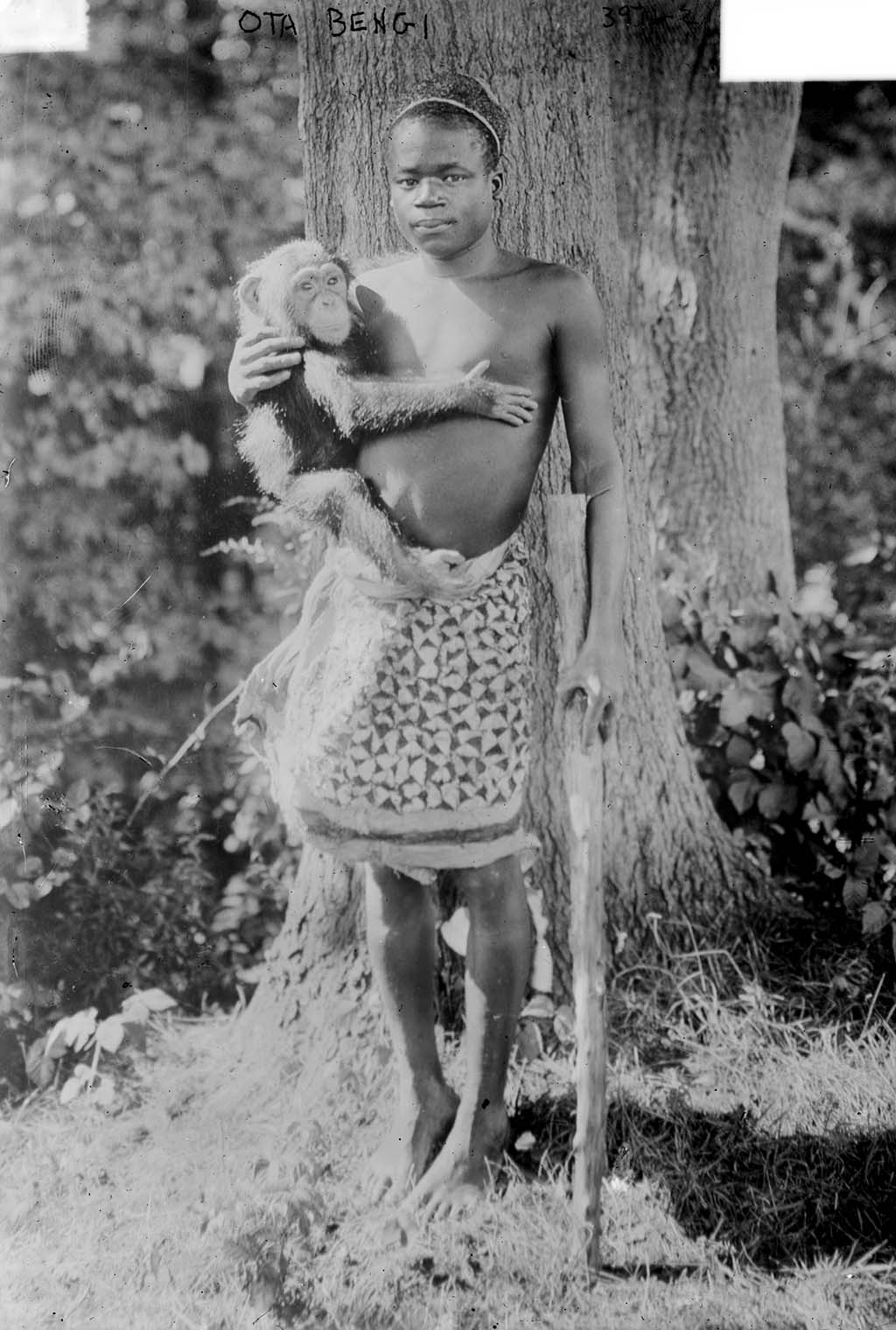 Ota Benga was a teenage boy brought from his homeland in central Africa and displayed like an animal at the Bronx Zoo in New York City, New York.

Benga was born sometime in 1883 in the Ituri Forest in what would soon become the Congo Free State (now the Democratic Republic of the Congo). He was born into the Mbuti Pygmy colony, one of many small bands of extended family groups of between 15 to 20 people. These colonies were nomadic, moving from one temporary village or camp to another as dictated by the seasons and hunting opportunities throughout the year.  At the 1885 Berlin Conference that partitioned Africa, King Leopold II of Belgium was allowed to take possession of the Congo Free State. In order to make his possession profitable, Leopold began to exploit the region’s resources including rubber and imposed forced labor on the inhabitants including the Mbuti Pygmies which often were reinforced by beatings, amputations, and murder.

When Benga, a teenager, returned from an elephant hunt and found his entire family and village had been slaughtered by Force Publique, the private army of King Leopold created to enforce rubber production quotas. Benga now alone and defenseless, was kidnapped by slave traders and put to work as a laborer in an agricultural village.

In 1904, Benga was freed by an American missionary and amateur anthropologist Samuel Phillips Verner who was under contract from the Louisiana Purchase Exposition to bring back pygmies to be part of a human exhibition at the fair. Verner found Benga and negotiated his release from the slave traders for a pound of salt and a bolt of cloth. Verner recruited other Africans for the exhibit as well and the group was brought to St. Louis in June 1904.

The Africans were displayed and Ota Benga became a particularly popular “performer” who attracted huge crowds. On exhibit at the same time with the Apache chief Geronimo, the two became friends. For his efforts, Verner was awarded a gold medal in anthropology at the close of the Expedition.

Verner and Benga returned to central Africa at the end of the Exposition but Benga, feeling he no longer belonged, chose to come back with the anthropologist to the United States in 1906. Verner took Benga to the Bronx Zoo where he was initially hired to help with the animals.  Zoo officials however began to exhibit him in the Monkey House where again he attracted large crowds. While Benga proved a popular “attraction,” a group of black New York clergymen led by Rev. James H. Gordon, demanded that he be freed. By the end of 1906, 23-year-old Benga was released to the custody of Rev. Gordon who placed him in the New York City’s Howard Colored Orphan Asylum.

In 1910 Gordon arranged for Benga to relocate to Lynchburg, Virginia where he received formal schooling and religious training for the first time. Benga began working at a local tobacco factory to pay for his journey back to Central Africa. By 1914, however World War I began and severely limited passenger ship travel. On March 20, 1916, most likely overcome with depression and heartbreak, Ota Benga committed suicide in Lynchburg, Virginia.  He was about 33 years of age at the time of his death.