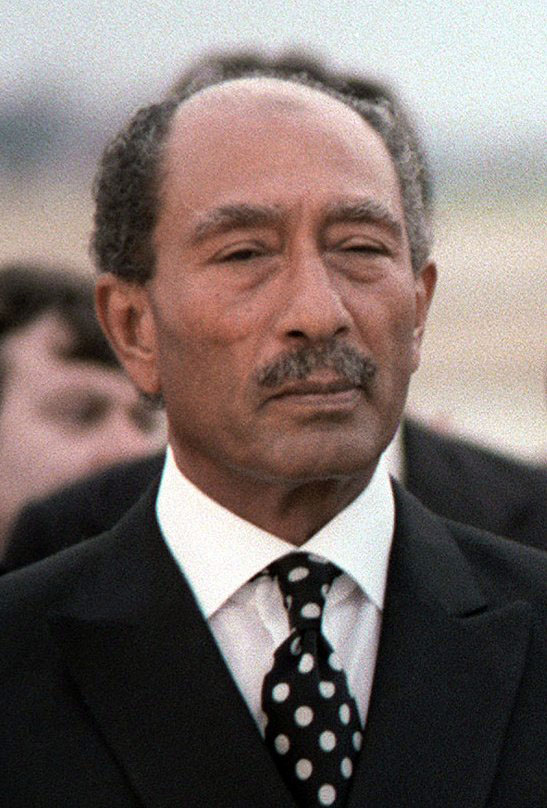 Muhammad Anwar al-Sadat, third President of post-independence Egypt (governing from 1970 to 1981), was born of peasant background in the Nile Delta village of Mit Abu al-Kum on December 25, 1918. The son an Egyptian army clerk and a Sudanese housewife, Sadat was educated in Cairo, where his family moved in 1925. As a result of the 1936 Anglo-Egyptian Treaty, access to the Military Academy was no longer restricted to the upper classes and by 1938, Sadat was a commissioned officer.

Al-Sadat became involved in underground political activities by 1941, joining others seeking to overthrow British rule, including Lieutenants Gamal Abdel-Nasser and Zakariah Mohieddin. Sadat also joined right-leaning clandestine groups like Young Egypt and the Muslim Brotherhood. Throughout the 1940s he was in and out of jail for collaborating with German agents and conspiring in a number of assassination attempts. By the end of the decade, Sadat was out of prison, reinstated into the Army, and had gotten married to the well-connected, half-British Jihan Safwat Rouf. In 1950, Nasser asked Sadat to join the Free Officer’s Movement, having known of his involvement in anti-British organizations.

When Nasser and other Army officers led a military coup on July 23, 1952, against King Farouk, Sadat was chosen to announce the coup leaders’ initial proclamations on the radio.  Sadat was also made a member of the Revolutionary Command Council, where he served as liaison to the Muslim Brotherhood and editor of the official newspaper, al-Jumhuriah.  With Nasser soon strengthening his hand and pushing out the opposition, Sadat loyally supported the powerful leader. He was rewarded with a number of prominent positions: Minister of State in 1954, Speaker of the National Assembly of the United Arab Republic in 1958, and vice-president from 1964 to 1967 and later from 1969 to 1970. By 1969, the Vice Presidency was limited from seven chairs to one, with Sadat winning the single appointment over Ali Sabri, who Nasser saw as a growing political threat.  When Nasser died in 1970, the Egyptian National Assembly elected Sadat President by a 90% margin.

Upon assuming power, Sadat shrewdly promised a continuation of Nasser’s policies. In 1972, he expelled 15,000 Soviet advisers and began a closer relationship with the US. Sadat continued ties with Syria and other traditional Nasserist allies, but also grew closer to Saudi Arabia.

The October 1973 war with Israel was a political success for Sadat. He used his political capital from the victory to initiate peace talks with Israel, culminating in the 1979 Camp David Peace Treaty, a year before he accepted the 1978 Nobel Peace Prize. Sadat also used his credentials from the 1973 war to begin his policy of liberalizing the economy and overturning Nasser’s socialist system.

Near the end of his term, Sadat cracked down on a growing opposition, arresting 1,600 people from a broad swath of the opposition and reversed a number of his earlier positions.  Because of these changes in his views and policies, Muhammad Anwar al-Sadat was assassinated by a group called Jihad in 1981.