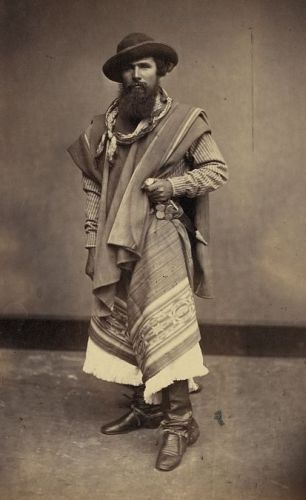 Gaucho of the Argentine Republic, 1868
Courtesy US Library of Congress

Many students of frontier societies, most notably Frederick Jackson Turner, have depicted the frontier as a place of relatively greater democracy and social leveling. Unfettered by the social conventions and constraints of settled society, the frontier supposedly offered greater opportunity and equality to all. In reality, ethnic minorities faced discrimination in ranching frontiers throughout the Americas. A parallel myth, especially strong in Argentina and the United States, depicts cowboys, the quintessential frontier heroes, as white. A look at frontier demographics reveals the vast majority of Latin American cowboys to have been any color except white. Thus myth and social reality diverged in both North and South America.

Horsemen throughout South America exhibited a similar ethnic makeup, but local differences altered the relative proportions. In Venezuela, the greater number of slaves and runaways who escaped from coastal plantations increased the black influence among the cowboy or llanero population. Estimates for Venezuela in the early nineteenth century place the white population (Spaniards and creoles, or American-born Spaniards) at no more than 20 to 25 percent of the total, with castas (nonwhite lower classes) comprising the balance. Slavery figured less prominently in the economies of colonial Uruguay and Argentina, so mestizos outnumbered black gauchos (cowboys of the pampas or plains).

Brazil developed two distinctive cowboy cultures. Vaqueiros worked in the sertão, the poor, dry, dusty backlands of the country’s northeastern “hump.” Often beset by long droughts, the region required hardy cattle capable of surviving the desert conditions. In the early colonial era, poor Portuguese immigrants worked as cowboys, but over time, miscegenation created a multiethnic society throughout most of Brazil. By the eighteenth century, most vaqueiros were mestizos, Indians, or blacks.

Writing in 1902, Brazilian intellectual Euclides da Cunha described the northeasterner. “Glued to his horse’s back, with his knees dug into its flanks until horse and rider appear to be one, he gives the bizarre impression of a crude sort of centaur: emerging unexpectedly into a clearing, plunging into the tall weeds, leaping ditches and swamps, taking the small hills in his stride, crashing swiftly through the prickly briar patches, and galloping at full speed over the expanse of tablelands.” Some Brazilian intellectuals depicted their northeastern cattle frontier as a place of racial and social democracy. However, lines and class and race divided people on the frontier as elsewhere in Brazil. The grim reality of cowboy life in the desolate northeast was far less heroic than latter-day mythmakers would have us belief.

In Rio Grande do Sul, Brazil’s southernmost province, gaúchos, cultural cousins to the gauchos of Argentina, rode the vast, lush rolling plains, the campahna. Fiercely independent like all horsemen, the gaúcho resisted the constraints of law, but owing to his superb horsemanship and cavalry skills, he often faced military conscription as did cowboys elsewhere in Latin America. Hides and dried beef to feed slaves remained major exports from southern Brazil well into the nineteenth century. Auguste Saint-Hilaire visited Rio Grande do Sul, Brazil in the early 1820s: “The cattle are left completely to the laws of nature. They are not cared for in any way. They are not even given salt,” he noted.

Across the Andes Mountains from Argentina, huasos tended cattle in the valley and mountain pastures of Chile. Thomas Sutcliffe described huasos at work during a rodeo (cattle roundup) in the early nineteenth century. He watched them “scouring the woods, and riding at full gallop up and down the steep hills, and almost impervious thickets of thorns, “algaroba” [algarroba, a variety of vetch], and patches of cardoon [perennial thistle related to the artichoke], where a stranger could scarcely find a passage. . . .. I have often seen them throw their lasso at full speed, and entangle and secure the wildest animal in situations that have surprised me.”

As in other countries, Chilean romanticizers created an image of their cowboy as a creole gentleman (American-born Spaniard), dressed in fine silks, trimmed with silver or gold braid, and sporting huge silver spurs. The huaso of reality was an ill-dressed, hard-working lower-class mestizo cowhand. Horsemen everywhere tried their best to avoid working on foot. Huasos sometimes failed on that score and had to perform agricultural and well as ranch work.

Often faced with labor shortages, Latin American ranchers availed themselves to both wage laborers and slaves. The ranching elites used debt peonage and various types of passports and working papers to limit the economic options of free workers. Slaves worked throughout the llanos of Venezuela and Colombia as well. In 1791 some 180 slaves lived on or near sixteen ranches in the province of Tucupido. The same records listed only ten resident free peons. In 1799, geographer Alexander von Humboldt accurately recorded “these Mulattoes, who are known by the name of Peones Llaneros, are partly freed men and partly slaves.” Despite abolition, slaves remained in the llanos after independence came to Venezuela. Slaves remained in bondage through legal subterfuge for decades after abolition in Argentina.

Llaneros worked cattle in another difficult terrain, the llanos of interior Venezuela and Colombia. Flooded during the rainy season and parched during the dry season, this difficult environment required workers of great stamina. Richard Vowell described llaneros at work in 1818. “Although usually styled and considered herdsmen, their habits and mode of life were in reality those of hunters; for the cattle, which constituted their sole wealth, being perfectly wild, the exertions requisite to collect a herd, and to keep it together in the neighbourhood of a farm-house, were necessarily violent and incessant.”

Latin American racial distinctions and prejudice paralleled attitudes in the United States. A clear racial divide emerged in Venezuela during the independence wars. Llaneros, led by regional caudillos (local strongmen), battled the patriot forces of the white creole elite in Caracas. José Tomás Boves, a wily and vicious Spanish Army officer, ably manipulated racial hatreds to rally llaneros behind the royalist standard. It took the death of Boves and the prowess and charisma of llanero caudillo José Antonio Páez to swing the fierce cavalrymen of the llanos to the patriot cause.

Cowboys of color in Venezuela and Colombia proved central in many patriot victories, such as the famous battles at Boyacá in 1819 and Carabobo in 1821. In the eyes of some, the horsemen became symbols of patriotism. In the 1860s, José María Samper described the llanero as a national archetype for Colombia. Manuel Tejera presented similar images of the Venezuelan llanero during the 1870s.

In Argentina, gauchos, overwhelmingly cowboys of color, felt little motivation to battle Indians or foreign enemies on behalf of white landowners and politicians. As a result, chronic manpower shortages plagued military commanders and rendered inoperative strategies that required large numbers of troops. In terms of class, culture, and economic interests, gauchos had more in common with the Indians of the pampas (plains) than with the elite leaders giving the orders. Only regional caudillos, who rewarded gauchos with an opportunity for plunder, found willing recruits (montoneros).

Observers marveled at the equestrian skills of all South American horsemen. In the 1860s, Wilfred Latham recorded a typical view.”Born to the horse, as it were, the gaucho is a splendid horseman, dexterous with the lasso. In full career after a wild bull or cow, he swings the lasso and throws it unerringly over the animal’s horns; then on his checking the horse, the lasso, which is fastened to a ring in the broad hide girth of the saddle, is drawn taut, and the animal swung round or thrown.”

Despite their importance in war and to the ranch economy, Argentina’s elite leadership in Buenos Aires despised and feared the provincial masses, calling them cabecitas negras (little black heads). Cowboys of the pampas, mounted and armed as montoneros, provided the basis of popular and military support for disruptive caudillos. Racism pervaded and shaped elite policies on labor, immigration, and other matters throughout the nineteenth century. The one bright spot for Afro-Argentine gauchos took a musical form. Wandering troubadours, called payadores, entertained throughout the country. Many of the more famous singers were black.

Overall, South American cowboys attracted a curious blend of positive and negative commentary. Outsiders, whether Latin American or European, lauded the cowboys’ stamina and skill on horseback. Nationalists praised their warrior virtues as cavalrymen. Yet racism and ethnocentrism colored many views which held these horsemen to be savage, violent, and barely human. Naturalist Charles Darwin well expressed this ambivalence about gauchos during his visit to the pampas in the early 1830s. “Their politeness is excessive: they never drink their spirits without expecting you to taste it; but whilst making their exceedingly graceful bow, they seem quite as ready, if occasion offered, to cut your throat.”

As the twentieth century dawned, Argentina’s ruling elite encouraged the creation of a new, mythical gaucho–loyal, patriotic, and white. Fearful of the disruptions of Italian immigrants, some radical labor leaders, the Argentine elite created an idealized white gaucho to serve as a model of citizenship, a figure that bore no resemblance to the actual gauchos of history. Thus in North and South America, cowboys of color remained suppressed and hidden from the historical record until recent times. Today we recognize the multiethnic composition of the ranch labor force and the fallacy of invented white heroes of horseback.