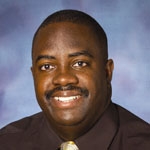 Edward J. Robinson, an assistant professor of history and Bible at Abilene Christian University in Abilene, Texas, earned his Ph.D. is in African American History from Mississippi State University in Starkville in 2003.  He has three master’s degrees, including a M. A. in Classical Greek from the University of Illinois in Champaign-Urbana.

A native of Jacksonville, Texas, Robinson attended undergraduate school at Southwestern Christian College in Terrell, Texas.  He has authored five books: To Save My Race from Abuse: The Life of Samuel Robert Cassius (Tuscaloosa: University of Alabama Press, 2007); To Lift Up My Race: The Essential Writings of Samuel Robert Cassius (Knoxville: University of Tennessee Press, 2008); A Godsend to His People: The Essential Writings and Speeches of Marshall Keeble (Knoxville: University of Tennessee Press, 2008); Show Us How You Do It: Marshall Keeble and the Rise of Black Churches of Christ in the United States, 1914-1968 (Tuscaloosa: University of Alabama Press, 2008); and The Fight Is on in Texas: A History of African American Churches of Christ in the Lone Star State, 1865-2000 (Abilene: Abilene Christian University Press, 2008).

The Interdenominational Theological Center  (ITC) is a Christian, ecumenical, graduate professional school of theology located on the Atlanta University campus in Atlanta, Georgia. The ITC began in 1958 when four schools of theology united to form the Center: Morehouse School of Religion, Gammon Theological Seminary, … END_OF_DOCUMENT_TOKEN_TO_BE_REPLACED

The collaboration of diligent black people and concerned white philanthropists from the North was the impetus behind the formation of what is now Huston-Tillotson University in Austin, Texas. Chartered in 1877 and opened in 1881 under the name of Tillotson Collegiate and Normal Institute by … END_OF_DOCUMENT_TOKEN_TO_BE_REPLACED

Samuel Robert Cassius was an ordinary man who lived an extraordinary life.  A former enslaved African American from Virginia, Cassius was the product of a bi-racial union, a house-slave, Jane, and probably his physician and politician owner, James W. F. Macrae, a relative of General Robert E. … END_OF_DOCUMENT_TOKEN_TO_BE_REPLACED