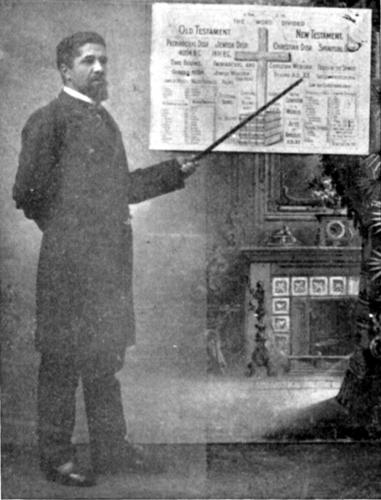 Samuel Robert Cassius was an ordinary man who lived an extraordinary life.  A former enslaved African American from Virginia, Cassius was the product of a bi-racial union, a house-slave, Jane, and probably his physician and politician owner, James W. F. Macrae, a relative of General Robert E. Lee.

During the Civil War, Cassius and his mother relocated to Washington, D. C., where he worked as a “contraband” and enrolled in the first school for African American children in the nation’s capital.  In this school, young Samuel encountered a white school teacher from Connecticut, Frances W. Perkins, who whetted his appetite for knowledge, steered him toward the ministry, and inspired to teach in his adult years.  While residing in the Washington, D. C., Cassius also “shook hands” with President Abraham Lincoln, Frederick Douglass, and a host of other white and black dignitaries.

Cassius married Effie Festus-Basil in Washington, D.C. in 1874. In the early 1880s, the family relocated to Brazil, Indiana, where he toiled as a coal-miner and where he converted to the Churches of Christ, a religious denomination tracing its American origins to Barton W. Stone and Alexander Campbell, variously known as the Stone-Campbell Movement or Restoration Movement.  In 1891, Cassius, driven by a religious impulse as well as a desire for economic advancement, took up residence in the Oklahoma Territory, where he lived until 1922.  In Oklahoma, he worked as a preacher, educator, farmer, entrepreneur, postmaster, and politician.  Cassius fathered eleven children with his first Effie (who died in 1895), and twelve with his second wife, Selina Daisy Flenoid, whom he married in 1898.

In 1920, Cassius published The Third Birth of a Nation, a response to and denunciation of Thomas Dixon’s 1905 racist novel The Clansman and D. W. Griffith’s 1915 inflammatory movie, “Birth of a Nation.”  Cassius reissued his book in 1925.  From 1922 until 1925, Cassius lived and preached temporarily in Ohio, Illinois, Minnesota, and California, before settling in 1926 in Colorado Springs, Colorado, where his eventful life ended on August 10, 1931.