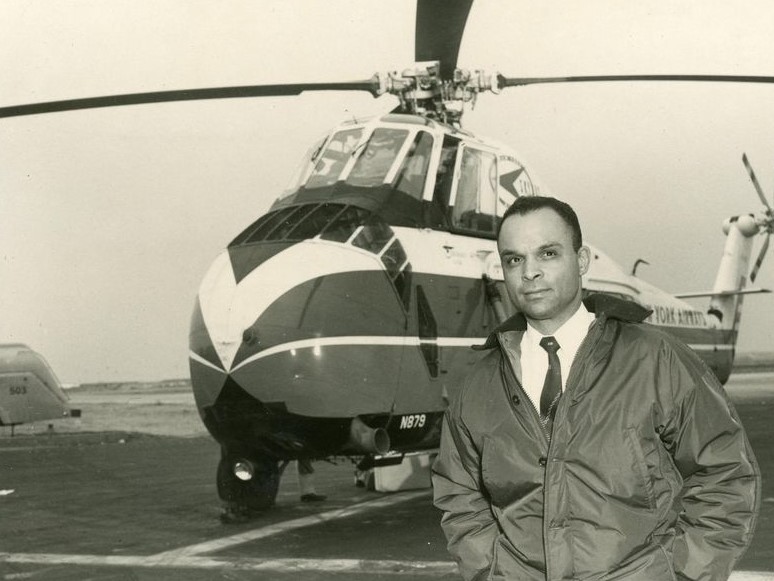 Perry Young Jr, an airplane and helicopter pilot, was the first African American person to be hired by a commercial airline with regularly scheduled passenger flights. Young was born to his parents Henry Young Sr. and Edith Lucille Young on March 12, 1919 in Orangeburg, South Carolina. His father ran a dry cleaning store and also owned several garages.

The Young family moved to Oberlin, Ohio in 1929.  Right after graduating from Oberlin High School in 1937, Young took his first flight on an airplane and decided he would become a pilot. Later that summer, Young started his flight lessons and flew his first plane on Christmas Day 1937.  He paid for the lessons by washing cars over the summer. The next year, Young decided to attend Oberlin College instead of accepting a four-year scholarship to the prestigious Oberlin Conservatory of Music. In 1939, he received his private pilot’s license after dropping out of college to pursue this goal full time.

After completing his training Young tried for three years (1939-1942) to be hired as a commercial pilot but due to racial discrimination in the industry, he could not get a pilot’s job.  Shortly after the United States entered World War II, however, the U.S. Army hired Young as an instructor for the 99th Pursuit Squadron better known as the Tuskegee Airmen.  Young worked for the Army through the rest of World War II, instructing more than 150 men and was praised for his expert training which resulted in the Tuskegee Airmen becoming often decorated pilots.  Nonetheless, after the war ended he still could not get a position as a commercial pilot.

In 1946 Young left the U.S. to find pilot’s work in the Caribbean.  His first stop was Haiti where he flew for the national airline and tried unsuccessfully to start his own airline business.  While in Haiti, Young married and he and his wife, Shakeh, had three children over the next decade.

After his failed airline venture in Haiti and a brief stint as a pilot in the U.S. Virgin Islands, Young moved his family to Puerto Rico in 1955 and worked as a pilot for the Puerto Rico Water Resources Authority. While he was living in Puerto Rico, he earned his helicopter pilot’s license.

Finally at the age of 37, Perry Young was hired by New York Airways, a regional carrier, in 1956 as both an airline and helicopter pilot.  On February 5, 1957, Young flew his first commercial flight when he co-piloted a nine minute, 12 passenger helicopter flight from La Guardia Airport to Idlewild Airport. Young eventually reached the rank of captain at New York Airways and by that point he flew both helicopters and commercial passenger airliners.  Young remained with New York Airways for 23 years until the company went bankrupt in 1979.  At the age of 60 Young began piloting for a Manhattan sightseeing service but retired after a few years (the exact date is unknown).

Perry Young Jr., died on November 8, 1998, in Middletown, New York, leaving behind his second wife, and his two remaining children.