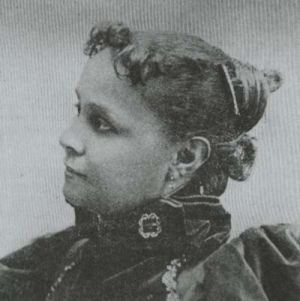 Fannie Barrier Williams was an educator, political activist, and women’s rights advocate who worked for advancement opportunities of African Americans. She called especially for social and educational reforms to improve the plight of black women in the Southern States of the U.S.

Barrier was born to Anthony and Harriet Barrier in Brockport, New York on February 12, 1855. The family of five was one of very few black families in the community. Despite their minority status, they were well-respected in Brockport. Aspiring to become a teacher, Barrier was the first African American to graduate from the Brockport State Normal School (now SUNY Brockport) in 1870.  She was 15 at the time of her graduation.  Barrier and her siblings did not experience much overt discrimination growing up in Brockport. Besides being one of the few black families in the neighborhood the Barriers were the only black family at their church, the First Baptist Church of Brockport.

Upon graduation from Brockport State, Barrier moved to Washington, D.C. to teach recently freed blacks who were migrating to the nation’s capital in the 1870s. Barrier, however, had difficulty adjusting to the greater racism in Washington, D.C. and eventually went to Boston, Massachusetts to study music at the New England Conservatory of Music. Unfortunately, her piano studies concluded when she was asked to leave by the administration after her white counterparts threatened to leave if she was allowed to continue to study there.

After several disappointments Barrier returned to Washington, D.C. to teach, and married Georgia-born Samuel Laing Williams in 1887.  At the time Samuel Williams was a law student at Columbian University in Washington, D.C. (now George Washington University Law School) and longtime friend of Booker T. Washington.  The new couple moved to Chicago, Illinois where Samuel Williams started a successful law practice. In Chicago they joined the All Souls Unitarian Church, where Williams was the first African American and the first woman to serve on the Board of the Chicago Public Library.

Williams spoke at the World’s Columbian Exposition in 1893, where she voiced concern of the lack of representation of blacks at the significant social and cultural event. Later that year she helped found the National League of Colored Women. In 1896 Williams was involved in the creation of the National Association of Colored Women. She also helped Daniel Hale Williams (no relation) establish Provident Hospital in Chicago in 1891.  Williams’ contribution to the cause of women’s suffrage was recognized when, in 1907, she was the only African American selected to eulogize Susan B. Anthony at the National American Women Suffrage Association convention. Also, despite her husband’s friendship with Booker T. Washington, Williams assisted W.E.B. DuBois in helping to found the National Association for the Advancement of Colored People (NAACP) in 1909.

As a social activist and orator, Williams spoke out on the discrimination towards both black men and women. She wrote extensively on the current position and potential progression of African Americans in education, religion, and employment. Many of her writings were published in The New Woman of Color: The Collected Writings of Fannie Barrier Williams, 1893-1918.

Fannie Barrier Williams continued to support women’s rights until her death on March 4, 1944. She died in her hometown of Brockport, New York.