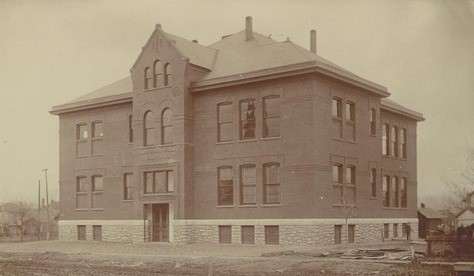 In 1879 the Kansas State Legislature passed a law permitting first class cities in Kansas (cities with a population of 15,000 or more) to create racially segregated schools. The Topeka Board of Education quickly followed by segregating elementary schools in the city.

In 1890 Lowman Hill, an area on the outskirts of Topeka, Kansas, was annexed by the city and the local school came under the authority of the Topeka school board. On July 20,1900, the Lowman Hill School burned to the ground just six weeks before the school year was to start. The Topeka Board of Education needed to find temporary school facilities for 175 white students and 35 African-American students.

Although the Lowman Hill school had racially integrated classrooms until that point, racial segregation had been prevalent in other schools throughout the city at that time. The School Board decided to temporarily transfer the black students to all-black Buchanan School and the white students to all-white Clay Elementary. The school board defended this reassignment by claiming African American and white children had “somewhat different intellectual requirements.” When the rebuilt Lowman School reopened only white students were allowed to return. African American students were directed to the Douglass School, an old two-room wooden structure that would be their school.

William Reynolds, an African American tailor, objected to his eight-year-old son, Raoul, being forced to attend a segregated school after having attended an integrated school. Reynolds also objected to his son being forced to attend a school several blocks from home when Lowman Hill was nearby. He claimed that the school board had agreed to replace the destroyed school with one that continued to be racially integrated. Reynolds also claimed that the school Raoul had been directed to attend was unsanitary, inconvenient, and undesirable and that his son had the right to be taught without regard to his race or color.

On May 31, 1902, William Reynolds sued the School Board to allow his son entrance into the new Lowman Hill school claiming that the separation of children by race in the classroom violated the provision in the Kansas state constitution requiring the establishment of a uniform system of schools. His attorney also argued that the segregation law violated the rights of children under the Fourteenth Amendment of the U.S. Constitution.

Attorneys for the School Board argued that the school district was in compliance with the standard of separate but equal facilities for the races that had been set by the Supreme Court in the 1896 Plessy v. Ferguson Decision. The Board also argued that they had received petitions from African American parents who wanted a school closer to their community but they had not asked for an integrated school.

The case eventually came before the Kansas Supreme Court which in March 1903 held for the Board of Education claiming first class cities were allowed to operate separate elementary schools. The court dismissed Reynolds’ suit saying that “the system of educational opportunities, advantages, methods and accommodations” in Topeka schools “was uniform, constant, and equal” whether attended “by blacks and whites commingling, or by them, separately.” Finally, the court said that Fourteenth Amendment to the United States Constitution did not supersede Kansas law. The intent of the Amendment was not to “abolish distinctions based upon color” or force “a commingling of the races upon terms unsatisfactory to either.”

Although Reynolds lost, this case was one of the first cases to challenge the separate but equal doctrine. Future cases in Topeka demanding equality in education continued to be brought before the courts until the U.S. Supreme Court in the landmark Brown v. Board of Education decision in 1954 declared segregation in public schools unconstitutional 51 years later.