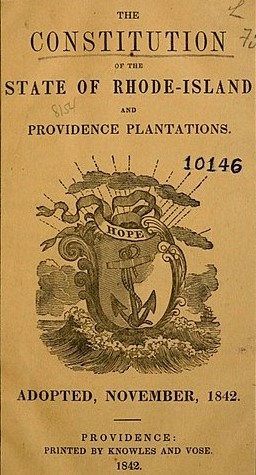 After American independence most states wrote constitutions that mirrored the national constitution with minor differences. The state of Rhode Island was an exception.  It retained the Royal Charter of 1663 granted by the British crown. Under that charter only adult male citizens who owned at least $135 of property could vote. In 1822 the state legislature added “white” to the requirement to vote.

By 1840 the population of Rhode Island had grown to 108,830 with large numbers of people living in urban areas (especially Providence) and working in various industries. Many were Irish Catholic immigrants and free African Americans. Most of these people did not meet the property requirement that would allow them to vote. By 1840 over 60% of white males failed to meet the qualification to vote. African Americans, Native Americans, and women regardless of race, were not allowed to vote.

The small African American population of Rhode Island was centered in Providence and many of them were educated and propertied. They began to pressure the Rhode Island government to allow African American men to vote, reminding political leaders that the fundamental reason for the American revolution was “taxation without representation.” Since they were being taxed, they should be represented in the state legislature or they should be exempt from taxation. Unpropertied white males also demanded the vote. The “elite” state legislature refused both groups.

In response unpropertied white males organized a “People’s Convention” which called for expanded voting rights for white males only. When African American groups requested that right to vote be extended to Blacks, the leaders of the Peoples Convention demurred. Instead, they organized an unsanctioned election in April 1842 which endorsed their new constitution and elected a new state government headed by Thomas Dorr as Governor.

The members and supporters of the government in power before the unsanctioned election became the “Law and Order Party.” They feared losing their social, political, and economic power to the influx of immigrants and the unpropertied. In response Thomas Dorr raised a militia which attacked the state arsenal in Providence to get arms. When they failed to fire a canon, Dorr and his men fled to regroup and plot their next move.

The “Law and Order” faction declared martial law in Providence and began to form a separate state militia to attack the “rebels.” They also announced that a new Constitutional Convention would be held in September 1842. African American community leaders in Providence saw a great opportunity. They offered 400 men for the militia. Rather than form their own units they joined white soldiers in integrated units. Black men also stepped forward to serve as police and firemen in Providence. This was a public relations coup for the local African American community. They were praised in the newspapers for keeping Providence safe from the rebel threat.

That threat never materialized because Dorr was arrested and the proposed constitutional convention was held as planned in September. Providence delegates to the convention argued vigorously for the exclusion of the word “white” in the voting requirement. Others disagreed and a compromise was formulated which called for a referendum. In November 1842 the “white” provision was voted down handily, largely due to Providence voters rejecting it by a 13:1 margin. The new constitution was ratified by an overwhelming vote of 7,024 to 51; making most Rhode Island Black males eligible to vote for the first time provided they met property requirements.  The constitution also outlawed slavery in the state.