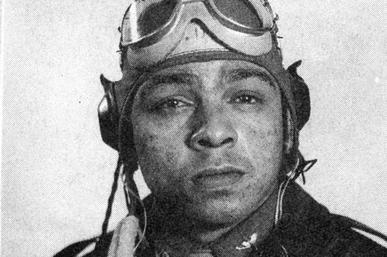 Walter Peyton Manning was a member of the famed Tuskegee Airmen and the only one known to be lynched as a prisoner of war. Born on May 3, 1920 in Baltimore, Maryland to Winifred Manning, he grew up in West Philadelphia, Pennsylvania. By the age of nine Manning lived with his uncle, Jacob Prescod in Philadelphia. He loved to swim and grew up wanting to fly planes. Manning attended Howard University but did not graduate.

In 1941 at the age of 21, Manning worked as a Locker Boy at the Philmont Country Club in Montgomery County, Pennsylvania. One year later, in 1942 he tried to enlist in the United States Army Air Corps but was rejected because of a condition called hammertoe. A hammertoe is a toe that is bent due to a weakened muscle, causing the toe to curl under the foot. At the time Manning was living again with his mother, Winifred Manning in the West Powelton neighborhood of Philadelphia. Desperate to get into the Army Air Corps, Manning elected to spend his savings to get surgery to repair his toe. He entered the Army Air Cadet Training Program at Tuskegee Air Field, Tuskegee, Alabama on March 15, 1943. He graduated from the program as a Second Lieutenant and was assigned to the 332nd Fighter Group, 301st Fighter Squadron of the U.S. Army Air Corps approximately one year after his successful toe surgery. Around that time Manning proposed to his girlfriend, Dicey Thomas but it is unknown if they ever married. In August 1944 Manning and the 301st Fighter Squadron were assigned to Italy.

During his time in Italy Manning flew 50 missions over German-occupied Europe. During his final mission, Manning was in a dogfight with Nazi fighter planes over Austria when his aircraft was shot down. Manning bailed out and when he landed, he was greeted by an angry mob. Manning was captured, beaten and jailed. He was imprisoned at the Nazi Luftwaffe Air Force base near Linz, Austria when angry townspeople, urged on by Luftwaffe officers, dragged Manning outside and beat him while his hands were tied behind his back until he died.

Manning, then 24, was considered lynched by Allied forces on Tuesday, April 3, 1945 about one month before the war in Europe ended. Manning is the only African American prisoner of war to have been lynched in during World War II. His remains were recovered by US troops after the war ended and American forces occupied Austria. No one was ever arrested for this war crime. Second Lieutenant Walter Peyton Manning was reburied at the Lorraine American Cemetery and Memorial in France. Manning’s family received the standard World War II Compensation of $500.00 in the aftermath of his death.