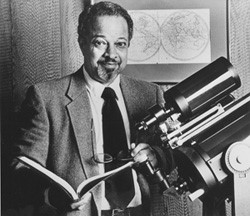 Arthur B. C. Walker, Jr.
Fair use image
This entry is sponsored by Meredith Perlman

Astrophysicist Arthur Bertram Cuthbert Walker was born in Cleveland, Ohio, on August 24, 1936, the only child of Cuthbert Walker, an attorney and native of Barbados, and the former Hilda Forte, a social worker. His mother fought to facilitate his early exposure to science at his elementary school in Harlem, New York and his study of chemistry and physics at the Bronx High School of Science. She also influenced his decision to apply to the Case Institute of Technology in Cleveland where he majored in physics, earning his bachelor’s degree in 1957. He continued his education in physics at the University of Illinois, receiving his master’s degree in 1958 and his doctorate in nuclear physics in 1962 with the dissertation titled “Photomeson Production from Neutrons Bound in Helium and Deuterium.”

Though his Ph.D. was in nuclear physics, Walker eventually became a pioneer in the field of X-ray and ultraviolet solar radiation and in designing specialized telescopes carried aboard spacecraft to photograph the sun and its corona. His professional career began when he entered military service in 1962 as an Air Force second lieutenant assigned to its weapons laboratory at Wright-Patterson Air Force Base in Ohio. There he helped to construct instrumentation for an experiment to launch a satellite to measure Van Allen belt radiation, something that sparked his interest in space travel and scientific experiments conducted in outer space. From 1965 to 1974 he worked at the Space Physics Laboratory of the Aerospace Corporation in California conducting cutting-edge experiments involving the sun and the Earth’s upper atmosphere.

Walker arrived at Stanford University in 1974 as a professor of physics and applied physics. Momentously, his first doctoral student was future astronaut Sally K. Ride, the first female to orbit the Earth. When the Space Shuttle Challenger exploded after launching in 1986, killing all aboard, it was Walker who was appointed by the government to chair the presidential commission that investigated the disaster. In the 1990s he led a team of scientists who, among other things, were the first to apply normal incidence X-ray optical systems to astronomical observation. One of the spectacular photos of the sun captured by his equipment was used on the cover of the prestigious journal Science. When the same photo was shown at a convention of the American Astronomical Society, the crowd burst into applause.

Walker is well remembered for advising minority race and female scientists. Over a period of three decades, Walker mentored close to 40 African American who got their doctorates in physics at Stanford, a figure twice as large as the number of black doctorates at the Massachusetts Institute of Technology (MIT) over the same period and significantly more than any other university in the nation.

At the close of his career, Walker and his colleagues had begun a collaboration to use X-ray spectroscopy to create 3-D images to reveal the composition of celestial bodies. Considered the West Coast dean and godfather of black physicists, Walker, a member of Sigma Pi Phi fraternity, died of cancer on April 29, 2001 at his home on Stanford’s campus at the age of 64.  He was survived by his wife, Victoria, a daughter, two stepsons, and four grandchildren.