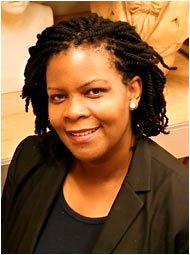 Award-winning historian Annette Gordon-Reed was born in Livingston, Texas, on November 19, 1958, the daughter of military veteran Alfred Gordon Sr. and Bettye Jean Gordon, an English teacher. As a girl who loved to read and write and was fascinated by the family of Thomas Jefferson, something that would loom large in her future. An outstanding high school student, Gordon-Reed earned her bachelor’s degree in history with high distinction at Dartmouth College in 1981. In 1984 she obtained her law degree (Juris Doctor) at Harvard University, where she was a member of the Harvard Law Review. She began her professional career as an attorney in the New York-based international law firm of Cahill Gordon & Reindel, then as general counsel for the New York City Board of Corrections which entailed hearing inmates appeal disciplinary actions.

Gordon-Reed began her academic teaching career at New York Law School in 1992. She taught there for eight years and became the Wallace Stevens Professor of Law. In the spring of 2007 she started teaching at the Newark, New Jersey, campus of Rutgers University as Board of Governors Professor of History. Acclaimed for her scholarship, in 2010 Gordon-Reed was lured to Harvard Law School to teach as the Charles Warren Professor of American Legal History and Professor of History in the Faculty of Arts and Sciences. While at Harvard she was also the Carol K. Pforzheimer Professor at the Radcliffe Institute for Advanced Study from 2010 to 2016, and the Harold Vyvyan Harmsworth Visiting Professor of American History at Queen’s College, University of Oxford from 2014 to 2015.

Both a legal scholar and historian, Gordon-Reed’s books are, chronologically, Thomas Jefferson and Sally Hemings: An American Controversy (University of Virginia Press, 1997), her groundbreaking work that garnered much attention; as co-author/contributor, Vernon Can Read: A Memoir (2001); as editor, Race On Trial: Law and Justice in American History (2002), with eleven contributors on the topic; The Hemingses of Monticello: An American Family (2008), for which she won the Pulitzer Prize, the National Book Award, the National Book Critics Circle Award, and thirteen other honors; Andrew Johnson (2011), concerning the failed seventeenth U.S. president; and, as principal author, Most Blessed of the Patriarchs: Thomas Jefferson and the Empire of the Imagination (2017), an examination of the interior life of an American president. Her articles have been published in the Journal of American History, History Today, William and Mary Quarterly, Early American Literature, American Heritage, and the American Historical Review.

Gordon-Reed has been the recipient of the MacArthur Fellowship “genius grant,” Guggenheim Fellowship, Cullman Center Fellowship, and the National Humanities Medal. She has received honorary academic degrees from the College of William and Mary and Ramapo College. Married to New York Supreme Court Justice Robert R. Reed, they have a son and daughter.