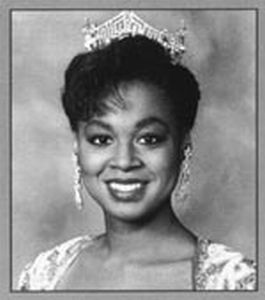 Marjorie Judith Vincent, the fourth African American to be crowned Miss America, was born on November 12, 1964 in Oak Park, Illinois. She was Miss America 1991. Vincent is the daughter of Lucien and Florence Vincent of Cap Haitien, Haiti. Vincent’s parents migrated to the United States in the early 1960s and Marjorie was the first of their children to be born on American soil. During her youth, Vincent attended Chicago catholic schools and took piano and ballet lessons. In the mid 1980s she entered DePaul University as a music major, eventually switching to business in her third year and graduating in 1988. The money she earned from beauty pageants enabled her to fund her education.

After failing to win twice at the state level, once as Miss North Carolina and as Miss Illinois, the third time was the charm as she became Miss Illinois 1990.  Winning at the state level allowed her to move on to the national competition in Atlantic City. During the September 1990 pageant she performed the Fantaisie-Impromptu (Op.66) by Chopin. Vincent wowed the audience with her proficiency and went on to win the crown of Miss America 1991. She succeeded another black woman, Debbye Turner, Miss America 1990. Her victory marked the first time there were back-to-back black Miss Americas.

After her victory a number of mainstream and African American publications stated that Vincent’s victory signaled the first time that a black woman with “classic” African features won the crown.  They also commented that at the time of her crowning, Vincent was already in her final year of law school at Duke University. She returned to Duke but eventually abandoned the pursuit of a law career and decided to go into television journalism. She became an anchor at WGBC in Meridian, Mississippi. She later worked at television stations in Peoria, Illinois and Columbus, Ohio.

Vincent’s platform during her reign as Miss America was addressing the plight of battered and abused women. By 2008, she eventually returned to law school to complete her degree at Florida Coastal Law School in Jacksonville, Florida.  In November 2006 she married Wesley Tripp.  The couple have one son.