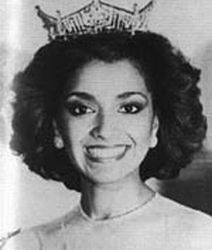 Suzette Charles (born Suzette De Gaetano), the second African American woman to hold the crown of Miss America, was born in Mays Landing, New Jersey on March 2, 1963. She is the daughter of Charles Gaetano, a businessman, and Suzette (Burroughs) Gaetano, a music teacher. Charles represented New Jersey in the September 1983 Miss America Pageant held in Atlantic City, New Jersey at the time. Charles performed very well during the pageant competition. She won her preliminary competition in the talent division and finished first runner up to Vanessa Williams, Miss New York, who became the first black Woman to win the Miss America title on September 17, 1983.

When Williams was forced to relinquish the crown due to a scandal involving nude photographs, on July 24, 1984, Charles became the second black woman to wear the Miss America crown and fulfilled her duties for the remaining seven weeks of William’s reign. This was the shortest time period served by any Miss America.

Charles who had already been involved in the media world went on to a career as a singer, entertainer, and television personality.  She has acted on the late 1980s CBS television series Frank’s Place and has showcased her talents overseas performing on the British television talk program, This Morning. She was the major voice in the movie Beyond The Dream. She has also toured with the late comedian Alan King and Joel Grey. Charles had a brief stint working at Black Entertainment Television (BET) co-hosting a short lived entertainment show.

Charles also pursued a singing career. Over the course of her career she has toured with music veterans Stevie Wonder and Lou Rawls in the late 1980s. In August 1993, she released her debut solo single, “Free To Love Again.” The song was a modest success. She has also toured with the Suzette Charles band. Charles is a member of Alpha Kappa Alpha sorority.

She is the wife of New York City ophthalmologist and plastic surgeon, Dr. Leonard Bley. They have a son, Ilan, and daughter, Hannah.

Elwood Watson and Darcy Martin, There She Is, Miss America: The
Politics of Sex, Beauty and Race in America’s Most Famous Pageant
(New
York: Palgrave McMillan, 2004); Susan Chira, “To First Black Miss
America, Victory is a Means to an End,” New York Times, September 19,
1983, F10, A1.; http://missamerica.org/.