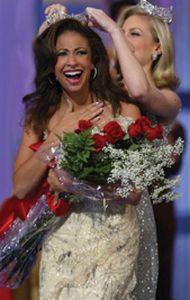 Erika Harold being crowned Miss America, Atlantic City, New Jersey, September 2002
Fair use image
This entry is sponsored by Phylisha Agbor and is dedicated to my granddaughter, Noelle Ogechi Peters, for her love of fashion and education.

Erika Harold, Miss America 2003, was the sixth black woman to win the Miss America title.  Harold was born on February 20, 1980 in Urbana, Illinois, the daughter of James Harold, a businessman and athletic director, and Fannie Harold, a college counselor and foster parent trainer. The product of a white father and African American and Native American mother, the multiracial Harold identifies as African American. She also describes herself as a politically conservative Christian.

Harold was 22 years old when she won the title of Miss America. She did not enter the pageant circuit until she was 18 years old. Soon after she was crowned, Harold adopted a dual platform “Preventing Youth Violence and Bullying” and “Respect Yourself, Protect Yourself.”  The latter topic encouraged sexual abstinence and refraining from engaging in drug and alcohol abuse.

Harold’s interest in the consequences of bullying evolved out of her personal experiences; she was targeted for harassment by fellow classmates when she was in junior high school. Harold and a white friend were regularly accosted by a group of hostile students. Both girls were regularly called obscene names and her parent’s home was vandalized, she believes, because of the harassment.  Eventually Harold and her friend transferred to another school following threats of violence against them.

At her new school, Urbana high, the future Miss America thrived. She was involved in several clubs and increased her interest in music. In the fall of 1998 she entered the University of Illinois at Champaign Urbana where she studied Political Science and graduated a member of Phi Beta Kappa.  Harold lost in the Miss Illinois Pageant competition twice but won the crown on her third attempt in June 2002. She later moved on to Atlantic City, New Jersey where she won the crown and title of Miss America.

After her reign as Miss America ended, Harold spent a year on the lecture circuit speaking on a variety of topics. In 2004 she served as a delegate at the 2004 Republican National Convention in New York City, New York.  Later that year she entered Harvard Law School in Massachusetts, earning her J.D. degree in 2007.  After graduation, Harold worked at the Chicago law firm of Sidney Austin LLP. She serves on several boards, is active on the lecture circuit and is currently the national spokesperson for the Teen Victims Project for the National Center of Victims of Crime.

In May 2012 Harold competed unsuccessfully to become the Republican candidate in Illinois’ 13th Congressional District.  GOP leaders chose instead Rodney L. Davis who was elected in November.  Harold ran against Congressman Davis in the Republican Primary on March 18, 2014 but was defeated by the incumbent congressman.