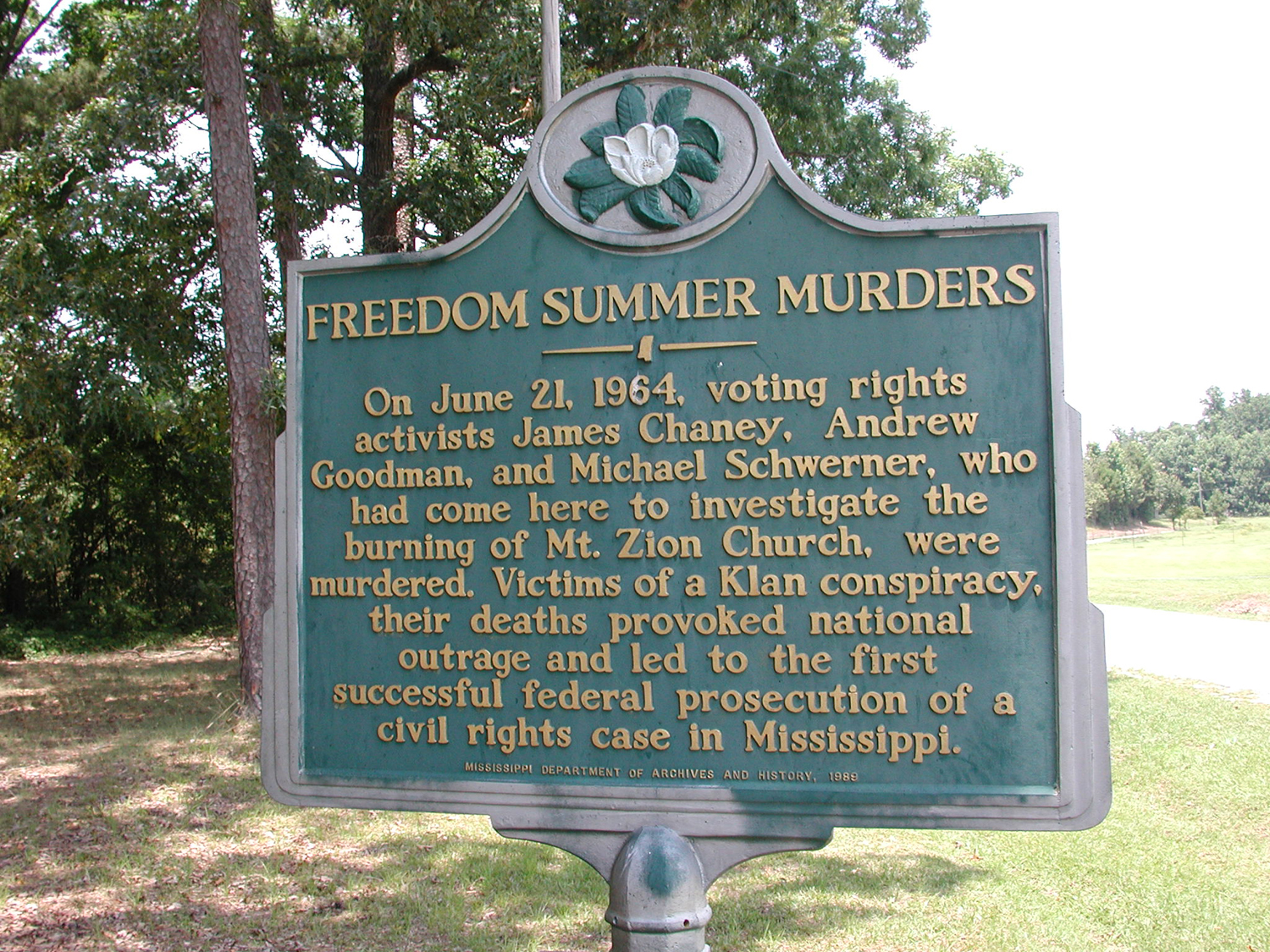 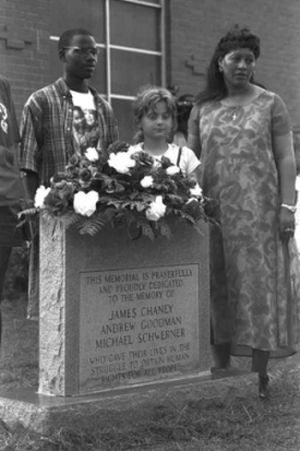 On June 15, 2014, as part of the commemoration of the fiftieth anniversary of the Mississippi Freedom Summer, Rita Bender returned to Mt. Zion United Methodist Church in Longdale, Mississippi to give an address commemorating the church’s role in the Mississippi Civil Rights Movement.  In January 1964 Bender and her husband Mickey Schwerner went to Mississippi as field staff for the Congress of Racial Equality (CORE) which along with the Student Non-violent Coordinating Committee (SNCC), the National Association for the Advancement of Colored People (NAACP), and the Southern Christian Leadership Conference (SCLC), worked under the umbrella of the Council of Federated Organizations (COFO), the organization which coordinated civil rights activities in Mississippi.  Rita and Mickey were assigned to Meridian, where with local people, including James Chaney, a young black activist, they established a community center and did outreach to surrounding counties on voter registration.  That activity drew the attention of the Mississippi State Sovereignty Commission and the Mississippi Ku Klux Klan.  On June 16, 1964, after the Mt. Zion Church in Longdale, Mississippi had determined to host a Freedom School, church members were beaten by the Klan, and the church was burned.  Mickey and James went to Philadelphia on June 21, 1964, along with Freedom Summer volunteer Andy Goodman, to lend their support to church members. The three were arrested by the sheriff’s deputy, held in the Philadelphia jail while the Klan members assembled.  They were murdered on the night of June 24, 1964.  The bodies were buried in an earthen dam and not discovered by the FBI until August 4. Rita Bender’s address to Mt. Zion appears below.

Thank you for your stalwart support, and for inviting me to speak. This is a most appropriate place to acknowledge all of the generations of people who have stood in pursuit of full and equal national citizenship. Fifty years ago, the people of the Longdale community, including parents and grandparents of folks who are here today, took great risk as participants in the struggle. They had worked with James Chaney and Mickey Schwerner on planning for Mississippi Summer, taking the courageous step of committing their beloved church, the church that once stood here, to be used in the efforts to obtain voting rights, and to establish a Freedom School. This was no minor undertaking.

In the short years that followed the end of the Civil War, there was a difficult struggle to forge a nation that embraced the concept of national citizenship for all the peoples of the United States. It was understood by those who participated in this effort that robust public education was necessary for the transformation of this nation. The Thirteenth, Fourteenth, and Fifteenth Amendments could have little consequence without education and the right to vote. And for that reason, the efforts at reconstruction were resisted violently. All too soon the commitment of the Nation waned and the promise of national citizenship died. Despite the obligations assumed by the state when Mississippi was readmitted to the Union that the new state constitution would provide voting rights and robust, equal education for all, these obligations to the nation and the black people of the state were broken.

In 1890, the Redeemers instituted a new and illegal constitution. This constitution, much of which remains unaltered today, deliberately denied education. The Redeemers tied voting rights to education and then deliberately denied education to the Freedmen, effectively eliminating the African American franchise. The wealthy planters, who constituted the convention delegates, created these mechanisms to avoid the 14th and 15th Amendments. Voting was tied to payment of the Poll tax, long term local residency, and literacy requirements which were arbitrarily enforced by the white registrars. The scheme functioned as planned. Although the majority of the population was black, the African American vote was all but eliminated. A pernicious scheme was imposed to bind African Americans to the land, isolating them completely from the political process, and from the opportunity to obtain education or economic advancement.

Since the end of Reconstruction, African-Americans’ right to vote and to obtain education were resisted mightily by the State of Mississippi and much of its white citizenry.

Tragically, the United States Congress and the Supreme Court of the United States gave Mississippi a “pass” on its voter suppression scheme – a “pass” that remained firmly in place well past Brown v. Board of Education and until passage of the Voting Rights Act of 1965.

Most of the freedmen remained tied to a life of menial labor, without access to meaningful public education or the right to vote. Those who were unable to flee the state were deprived of all meaningful opportunity to improve the circumstances of their own lives.

Thus, the Mississippi scheme worked well for the white population. In the 1950s and 1960s, black Mississippians attempted to break the strangle hold. Although there had been resistance previously, many of these more recent civil rights advocates, referred to as “race men” by local folks, were men who had fought in World War II or the Korean War, and returned to the oppression of Mississippi. They and strong, determined black women were unwilling to accept these conditions any longer. As we know, there was a bitter price to be paid. In addition to people who were thrown off the land, or brutally beaten, murders were common. I think of Rev. [George] Lee, Lewis Allen, Medgar Evers, Vernon Dahmer, of the uncounted lynching of men, and even children, who had done nothing but live black in this state with its program of enforced terror. Lynching had gone on unabated since Reconstruction. Medgar Evers wrote of the Lee, Smith and Till murders in “M is for Mississippi and Murder,” to no avail. The nation was not paying attention.

As the Civil Rights Movement gained strength and numbers, a small group of young people came into Mississippi to lend their assistance to the local people who were the Movement here. By 1963 the various civil rights organizations working in the state had joined forces as the Council of Federated Organizations. COFO soon determined to launch a challenge to the Mississippi Democratic Party, which had a stranglehold upon the state. The Mississippi Freedom Democratic Party was formed, and ran a slate of candidates. In early 1964 the decision was made to contest the seating of the regular Democrats at the upcoming National Convention, scheduled for August 1964. So too, COFO determined to engage in a massive statewide effort, inviting volunteers from all over the country to come to Mississippi for the summer, to work on voter registration in communities throughout the state, and to help establish Freedom Schools to teach basic skills as well as American and local history, black literature, and constitutional rights.

The state girded for the “invasion.” The Klan burned crosses and engaged in increasing violence over the course of the spring. It was in this context that Mt. Zion Church members were attacked as they left a church business meeting on the evening of June 16th, 1964. A heavily armed mob of Klansmen burned the church to the ground after beating Bud Cole and J.T. Rush. Was the Klan laying a trap for the civil rights workers or were the Klansmen attempting to terrorize the church members who dared to challenge the State? Maybe the Klan, acting as an unofficial arm of the state, was doing both.

On Sunday, James and Mickey, accompanied by new Freedom Summer volunteer, Andy Goodman, went to Longdale to lend what little moral support they could to this community and to the church members who had been brutalized.

The Klan members, who included numerous state and local law enforcement officers, struck again, murdering the three men. The lynching of one black man and two white men together brought national and international visibility to the brutal repression of the State. There was no such attention in the past when victims were black. We are here and retell these stories among ourselves and to our children and our grandchildren because history matters. How can we possibly explain how we got to where we were 50 years ago? How do we explain where we are now without understanding the tragic history of our Nation and of this State? How do we use this understanding to visualize where we need to go?

Context matters. Mississippi is once again leading the charge on voter suppression with new schemes to minimize the African American vote, intending to dilute the vote to a meaningless number. Unlike 1965, when the Congress finally paid attention, this Congress has turned a
blind eye. The United States Supreme Court now has tragically cut the heart out of the Voting Rights Act, yet Congress refuses to even consider restoration of the Act.

And what of public education? The State did not fund very basic education until the 1980s, and even minimal education continues to be vastly underfunded by the State Legislature. Mississippi lags the nation in spending to educate its children.

How does history inform what we need to do, here in Mississippi and throughout the Nation? The concept of national citizenship must be raised up again. We are all the people of one nation, with certain inalienable rights. We must insist upon the rights of national citizenship, embodied in our nation’s founding documents, and forcefully affirmed in the great Reconstruction Amendments to the Constitution. “States’ Rights” is merely code talk for the repression of those who strive for participation as full and equal citizens. The unhampered right to vote in both federal and state elections must be a federally guaranteed and a federally enforced fundamental right. We can tolerate no less. The privileged few cannot be allowed to silence much of the population, thereby imposing ever increasing economic inequity.

Public education must be a fundamental national right. Perhaps it will take a federal constitutional amendment. Full political and economic participation is not possible without quality education for all children. There are grass roots movements working to continue the struggle. There are judges who are receptive to challenges to voter suppression schemes, and to educational denials. But, there is a great deal of work to be done. Those of us who lived this history must lend our support to the young people who will carry the fight forward. We cannot go back to where we were.

If we learned one thing from the civil rights movement, it is that social change does not happen without a large, robust people’s movement. We owe it to our children to pass on this history and to assist them in using it to pursue their own dreams for a better life for all our people.