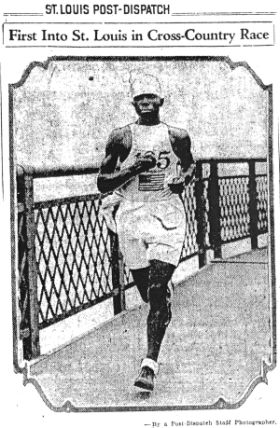 In the following account, sports historian Charles Kastner describes the remarkable athletic career of Eddie “the Sheik” Gardner of Seattle, Washington. Gardner was arguably the greatest ultramarathoner in Pacific Northwest history. For a detailed discussion of Gardner’s participation in the second and last of the two trans-America footraces held in the late 1920s, see Kastner’s recently published The 1929 Bunion Derby, Johnny Salo and the Great Footrace Across America (2014).

Eddie “the Sheik” Gardner was a rare and mighty force in the sport of long-distance foot racing.  He combined a seemingly effortless style with an iron will and unbounded courage to become an ultra-racing legend and a symbol of hope and pride to black America in the 1920s.

Eddie Gardner was born in Birmingham, Alabama, in 1898.  Shortly after his birth, his family left Birmingham and headed west, first to Pueblo, Colorado, then to Seattle, Washington where Eddie’s family prospered in the city’s more tolerant racial climate until his mother died of tuberculosis in 1911.

After graduation, Gardner returned to Seattle in 1921 where he found work maintaining steam boilers at the Puget Sound Power and Light Company.  Soon afterwards he entered the Washington State Ten-Mile Championship held annually in Seattle.

As he trained, Gardner adopted his trademark outfit, a white towel tied around his head, a white sleeveless shirt, and white shorts.  To his Seattle fans, he looked like the desert sheik made famous by matinee idol Rudolph Valentino.  They cried out “oh you sheik!” The name stuck, and Eddie Gardner became known as the “the Sheik” to his legions of fans.  By 1927, Gardner had won the ten-mile championship three times, set the state record for that distance, and had beaten the best collegiate and independent athletes in the Northwest, many ten years his junior.

He then set his sights on winning the “Bunion Derby,” the nickname for the first ever trans-America footrace, set to leave Los Angeles, California for New York City, New York on March 4, 1928.  The contestants would cover 3,422 miles in 84 days of racing.  Each would be a separate stage race run from one town to the next along the course, the average stage covering about 41 miles a day.  There had never been a race like it before. Few observers thought any of the men would reach the finish line.

Gardner entered the derby in hopes of claiming a share of the $48,500 in prize money that race organizer Charley Pyle had put up for the first ten finishers, with $25,000 going to the first-place winner. Few of the 199 men who started the race had any idea of the physical and mental demands they would face in what would soon be called daily ultramarathon racing.

The men known popularly as “bunioneers” endured a brutal baptism into trans-America racing as they ran across the Mojave Desert in California and froze in the high country of Arizona and New Mexico. When the surviving 93 bunioneers reached eastern New Mexico, they arrived as ironmen after their brutal initiation in the desert and mountains.

For the five African American runners, however, the worst was yet to come:  they would soon face the real possibility of death as the course took them across the Texas panhandle, Oklahoma, and Missouri, where Jim Crow segregation was law.  Here Gardner, as one of the front-runners, endured a hail of racial slurs and death threats from irate southern whites enraged at the sight of a black man beating white competitors.  In one case a white farmer trained a gun on Eddie’s back and followed him on horseback for an entire day, daring him to pass another white man.  In another case, a mob surrounded Eddie’s trainer’s car and threatened to burn it.

Gardner had learned to ignore the threats with Zen-like calm, for he knew that though whites despised him, he had the wholehearted support of the tightly-knit black communities along the course.  He became a symbol of hope and pride to the thousands of African Americans who saw him race, and to those who followed the race in the black press.  Gardner finished eighth out of 55 finishers and first among the three African American finishers, earning a thousand dollars for his efforts.

Charley Pyle began his second and final Bunion Derby on March 31, 1929.  This time he reversed course, starting the race in New York City and finishing in Los Angeles. The race was dominated by veterans from the first Bunion Derby, who had learned the hard-won lessons of pace, diet, and training.  The 34 rookies who joined the 43 veterans for the start were no match for the battle-hardened bunioneers.

Gardner was the only African American to attempt a second Bunion Derby.   Like the other veterans, he was a much wiser and patient runner than he had been in 1928. The Sheik had come back ready to race and prepared to deal with the barrage of racial slurs and death threats that he knew awaited him in the South. After several days of racing, he told a reporter that “just from New York to Baltimore, I have all manner of things said to me along the road so you can only imagine what it was like further south.”

Gardner’s trainer, George Curtis, a middle-aged African American tailor and apartment house owner from Seattle, had joined Eddie for another trip across America. He came equipped “with all things necessary for such a grind,” including army cots they could use to camp out in western deserts and prairies and in towns without African American communities where no hotel would give them a room. Even in the North, most hotels were reluctant to have Gardner as a guest, and when they accepted him, he was often relegated to the boiler room, basement, or other less-than-ideal accommodation. Together, though, Gardner and Curtis were ready for the ordeal that awaited them.

As the derby followed Route 40 from Baltimore, Maryland to St. Louis, Missouri, Gardner emerged as one of the three front-runners that also included Pete Gavuzzi of England and Johnny Salo of Passaic, New Jersey. Across Ohio, Indiana, and Illinois, the three kept pushing the pace and opened a huge gap between them and the rest of the field.  Gardner had entered the elite ranks of the new sport of trans-America racing.

On the 24th day of the race, Eddie was in third place after covering 1,040 miles.  The next day, the derby would cross the Mississippi River into Missouri where Jim Crow segregation was the law of the land, and Gardner wanted to make a statement. He ran at a sub-three hour marathon pace on the short, 22-mile course that passed through St. Louis on the way to the finish at Maplewood, Missouri.

Eddie wore his trademark Sheik outfit with his number 165 pinned on the shirtfront.   A few inches below the number, he had sewn an American flag. It was about six inches wide and was put there for all to see. Poignantly, without words, Gardner announced his return to the Jim Crow South.

Death could await him at any crossroad or from any passing car, but he kept going, unbowed by fear. Whites might kill him, beat him, or threaten him, but they could not change the fact that on this day he was running as the leader of the greatest footrace of his age and challenging deeply held preconceptions of black men as he went while giving hope to millions of his fellow African Americans who saw him race or who read about his exploits in the black press.  In the birth year of Dr. Martin Luther King Jr., Eddie had returned to the South with an American flag on his chest, a man willing to die for his cause.

To Eddie “the Sheik” Gardner, the Bunion Derby had been far more than a footrace; it had become a crusade, a vehicle to fight the endemic racism he encountered every day he raced across America, and Eddie had committed his body and soul to the cause. He apologized to his fellow African Americans for dropping out of the race. “I hope they understand,” he told a reporter, “that I stayed in the [Bunion Derby] as long as my physical condition would allow. I did my best. That is all anyone can do.” “I am sorry,” he added, “I wanted to keep on running and win—FOR YOU, my people.”

By the time Gardner died of a stroke in Seattle in 1966, most of his fans had forgotten him.  His story, however, deserves to be remembered and celebrated by anyone who takes up the sport of ultramarathoning, and for that matter, by anyone who admires courage and perseverance in the face of impossible odds.

Kastner, C. (2014, July 01). Eddie “the Sheik” Gardner: An Ultramarathoning Legend and Unsung Hero in the Struggle for Racial Equality in America.. BlackPast.org. https://www.blackpast.org/african-american-history/eddie-sheik-gardner-ultramarathoning-legend-and-unsung-hero-struggle-racial-equality-am/